For what purpose? This is the "now" question for the women's movement. Let me explain. My mother, who is 85, was one of only two women in her law school class at the University of Chicago in the '40s and, for her generation, their fight was to prove that women could do it. For my generation of baby boomer women who came into the workforce in the '70s after elbowing our way through male-dominated graduate schools, our mission was (and still is) to get the numbers up, to fill the talent pipeline with women who have a chance of breaking the glass ceiling.

But what will the legacy be of the next generation of women? At a time when the institutions of the day -- healthcare, politics, education, military, government -- are not meeting the needs of society, it is clear that we need a flood of courageous leaders who will exercise their power and ambition differently in order to get to a different outcome for the world. Throughout history, courageous leaders who change the course have tended to come from historically "out of power" groups. I believe that the legacy of the generation of Gen Y women (and men) will be to finally answer the question, "For what purpose do we need more women in leadership?"

I recently wrote about "Women and Power," the class I teach at Columbia University's Graduate School of International and Public Affairs (see my HuffPost blog "Finding the Leader Within"). My graduate students have a term paper due this week where they must declare their purpose -- Why they are on the planet? -- as well as prepare a Power Plan on how they are going to acquire power, claim ambition and use that power/ambition intentionally to make progress on their purpose.

Two weeks ago, the topic was "Leadership in the 21st Century." For that class, I "imported" three courageous women leaders whom I had the privilege to meet and work with this past summer in the Amazonian rain forest in Ecuador as part of my commitment to the Pachamama Alliance. 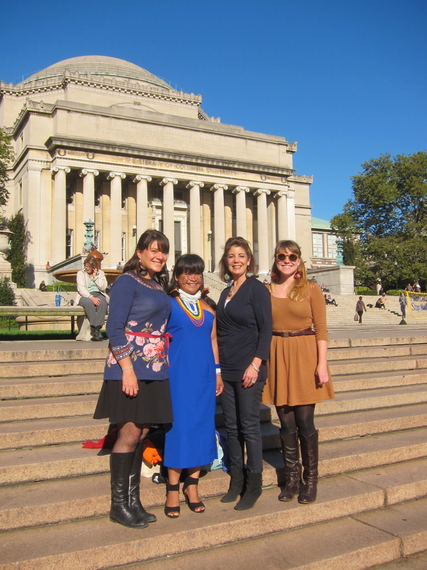 The Pachamama Alliance is devoted to partnering with the indigenous nations of the Amazon basin to preserve the biological and cultural diversity of the rain forest as well as educating the "modern world" on the importance of creating an economically sustainable, spiritually fulfilling and socially just human presence on our planet.

Belen Paez, a native Ecuadorian from the Andes, is the President of the South American affiliate, Fundacion Pachamama. She joined me in NY along with Narcisa Machienta, an indigenous leader from the Achuar Nation and her American-born colleague, Robin Fink, an anthropologist. These three women held my class spellbound as they told their stories.

Belen, educated as a biologist in aquatic animals, shared her commitment to protecting the life of the forest at all costs. This purpose became her life's work as she worked to protect the pink dolphins and giant otters that are now endangered species in the Amazon.

Narcisa, a native-born Schuar woman married to an Achuar man, retold how, upon moving to Achuar territory, she was shocked at witnessing difficult and some times fatal effects of traditional birthing and pre/post natal care on the women, children and native communities. Although in a very male-dominated "machismo" culture, Narcisa found her purpose by insisting, first to her husband and then in front of 500 men leaders, that it was both possible and imperative to educate the women on midwifery and maternal/child health practices that could co-exist with their traditions. She was able to gain the support of the shamans, the elders and the male leaders by helping them understand that protecting women and children was a critical part of keeping their communities and the entire Achuar Nation healthy and vital. The result was the birth of the "Jungle Mamas" program of Pachamama Alliance.

Robin, a young American-born anthropologist who is the Program Director for Jungle Mamas, spoke passionately of her work with Narcisa in the Achuar communities. Without taking care of maternal and child health in indigenous communities, the work of forest conservation and protection of biodiversity will falter. The Amazonian rain forests are the lungs of the world. If the rain forests are not vigorous and healthy, we are all at risk.

These three women -- Belen, Narcisa and Robin -- are great examples of courageous leaders who help answer the question, "For what purpose do we need more women in leadership?" Strong, passionate, fierce women -- along with men as allies -- will be the face of leadership we need in the 21st century as we marry our current work to the traditions and wisdom of the ages. Together, we can lead our companies and institutions to serve the needs of society today and for successive generations to come.

This post is part of a series produced by The Huffington Post in conjunction with our women's conference, "The Third Metric: Redefining Success Beyond Money & Power," which took place in New York on June 6, 2013. To read all of the posts in the series and learn more about the conference, click here. Join the conversation on Twitter #ThirdMetric.