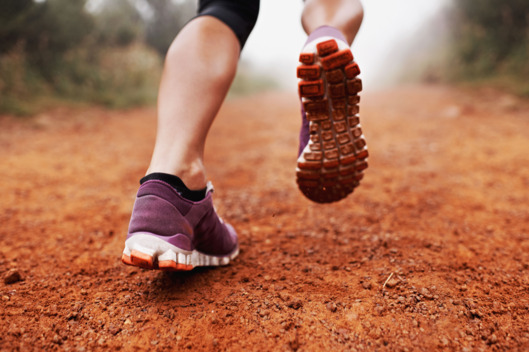 Most days, I wake up before the sun rises so I can get a run in before I head to work. Once, while I was still in college and back in my hometown for the summer, I set off on a run down a quiet, heavily wooded road, the lone runner out that day. Partway through, I realized a car had been trailing me for quite a while at an unusually slow speed. I'm a mildly neurotic person -- hence all the running to clear my head -- but this was a type of fear I'd never experienced before: I was overtaken by a primal emotion that seized my gut and wouldn't let go. My heart pounded from both panic and exertion as I willed myself to run as fast as possible until I made it to a main street, and the car finally drove off.

I'll never know if my reaction was misplaced paranoia or if I was in real danger, but, either way, it wasn't unusual for me to feel the way I did -- women think about their safety every time they set off for a run. And the assaulted or murdered female jogger has long been a mainstay of true-crime stories, even though these crimes don't occur at an unusually high frequency compared to others. (There are no statistics tracking female jogger deaths specifically.) Take the infamous Central Park jogger case, when a beating and rape put a 28-year-old woman into a coma for 12 days, captivated America for years, and led to one of the most notorious false-imprisonment cases of all time. More recently, a string of three brutal unrelated deaths have made the news. Alexandra "Ally" Brueger, a 31-year-old nurse from Michigan, was shot and killed during an afternoon jog. A few days later, 30-year-old Karina Vetrano was found strangled after she set off on an afternoon run in Queens. Shortly after that, 27-year-old Vanessa Marcotte, a Google employee who was visiting her parents in Massachusetts, was found dead, burned, and possibly sexually assaulted. She, too, had gone out running that afternoon.

These murders are notable because they've shattered the perception that this particular violent crime only takes place under certain circumstances, which was always a subtle way of suggesting that the victims were somehow complicit in their own attacks. My colleague Susan Rinkunas, the Cut's resident marathon runner, observes that "'Well, what was she wearing?' is now 'Well, where was she running? What time was it? Was she listening to music? Wearing short shorts? A sports bra with no shirt?'" That narrative also gave female runners a sense that certain behaviors could protect us: not running after dark and avoiding remote areas, for instance. But Brueger, Vetrano, and Marcotte were all out in broad daylight.

Despite my day-to-day comfort running in New York City, I've internalized certain boundaries without even realizing it. I don't run at night. I tend to save farther-flung routes for weekends, when I know there will be more foot traffic. I don't wear headphones because of a personal preference for silence, but the safety benefit has certainly crossed my mind. And in the summer, I'll momentarily wonder if I'm showing too much skin before I head out of the house -- then I remember all the times I've been catcalled while wearing fleece-lined leggings and a wool hat.

I'm hardly alone in my vigilance: Several people wrote to me to share stories of how being a woman affects their running routines. Hannah Waldrip, a 26-year-old New Yorker, said that she'll "always consider the time of day, how light it is outside, how many people I'll encounter along the way, whether someone on the street will say something to me because of what I'm wearing." This isn't anything new -- a 1980 newspaper story out of San Francisco features several women speaking about how they policed their own running behavior after hearing of several park rapes and a murder.

Related: How Exercise Shapes You, Far Beyond the Gym

Some women were forced to start taking precautions after their own brushes with danger. Take Emily Cody, 28, who runs a very common route in Brooklyn several times a week. Once, while she was wrapping up her regular loop, five young men on bicycles began to chase her and soon surrounded her, screaming catcalls and obscenities. She managed to dart away, but "after that I started running with my phone in my hand instead of banded to my arm, and still do," she said. "There's never a time when I don't think of the possibility that I could need every spare second available to me. I don't think the average male runner has the mileage calculated from one park exit to the next in case he needs an escape route."

A disparate fear of violence between genders is a very real thing: As of 2012, the number of women who said they would be wary of walking alone at night in their neighborhoods was more than twice that of men. This can feel limiting. Ariel Buckley, 32, who lives in Montreal, said, "Running at night is my absolute favorite thing, but I stopped doing it a few years ago when my large male running buddy moved away. Every once in a while I'll run up the mountain after sundown, and I always feel kind of terrified and cut it short; every once in a while I'll also get really angry that I can't just go out running when I feel like it."

For others, like Tiffany, a 30-year-old Chicago resident, the recent murders have provided new reasons to become vigilant about running safety. "I'm currently training for the Chicago Marathon, and I used to run early in the mornings when it was dark out, but now am just thinking about hitting up the treadmill in my gym," she admitted. That sentiment was echoed over and over: Maybe we actually weren't as safe as we thought we were. But if Brueger's, Vetrano's, and Marcotte's deaths indicate anything, it's that women can be at risk of violent crime no matter what we do -- even if we run safely, even if we don't run at all. And so we keep running.

Running remains my favorite activity in the world. It's a profoundly solitary sport, one that forces me to be aware of both my mind and my body in a way that nothing else does; one that manages to be simultaneously meditative and exhilarating. Best of all, it's remarkably freeing -- or as close to freeing as I can get in a world where, in order to survive, women must constantly alter our behavior in the interest of our own safety.

More from The Cut:
12 People on Running As Therapy
Katie Ledecky Is the Olympic Hero We Need
30 Famous Women on Heartbreak
How Winona Ryder Kept Her Cool
12 Women on How to Ask for More Money at Work