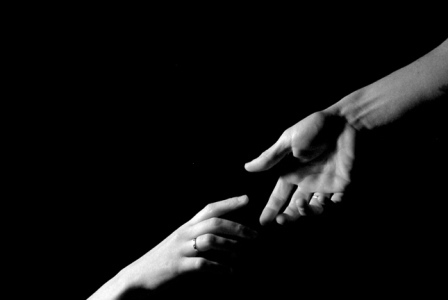 I was standing on a street corner in Vilnius, the capital of Lithuania, the land of my Jewish forebears. Not far away was the site of the Great Synagogue, once the spiritual center of a flourishing Jewish community. Now it is an empty lot.

Lost in reflection about the past glories of the Jerusalem of the North, and the brutal annihilation of the Jews of Lithuania during World War II, I was startled to hear someone asking breathlessly, "Are you Ellen?"

I turned to find a young woman wearing the white headscarf of a Catholic religious community. "We've read your book!" she was saying. "Will you come and talk with us?"

Members of the young woman's religious community -- sisters from around the globe -- had gathered in Lithuania for a contemplative retreat. They wanted to talk about the Holocaust, about remembrance, and about using an understanding of the past to build a more tolerant future.

Before that afternoon, strange as it may seem, I'm not sure I had ever spoken to a nun. At the convent, I saw women with short hair, simple head coverings, crosses and white blouses, dark skirts and sandals. They were teachers from Lithuania, from other European countries, from Vietnam and Rwanda. They had a lot to say.

An Italian woman said she remembered the massive deportation of her country's Jews during the war. "But I worry that the younger generation is forgetting," she said. "How do we keep the memories -- the sad stories and the beautiful stories of helping?"

A French woman was too young to remember the deportation of the Jews from her small town. She felt deeply "the duty of retroactive solidarity." Jews, she said, "are our brothers even if we didn't know them."

A Belgian woman wept as she described how her elderly relative, a former member of the Resistance, tells a young niece about the struggle against the Nazi occupation. "The innocent child helps to heal the old man," she said. "All of us in Belgium have been touched by this history."

A woman from Copenhagen talked proudly of how Danes hid Jewish children during the war and smuggled them across the sea to Sweden. "Once a year we visit to the hiding places with candles," she said.

"All of this is the European experience," said an older woman, a leader of the religious community. "Talking about it gives us a structure for going forward into the future."

She herself sometimes met with defensive attitudes when she spoke to Lithuanians about the Holocaust. "Don't touch! We too have suffered, under the Soviet regime!" Too often, she said, "in our daily lives we deny other people's suffering, covering that pain with our own. We accuse others in order to deny our own responsibility."

"It is very important to face our own intolerance," a French woman said, "to explore why these regimes met with indifference and passivity."

A young Lithuanian woman said she had learned from her parents that before the war, 90 percent of the residents of her small home town were Jews. "We all lived together," her parents said. Now, she wonders, "How can we touch people's hearts? How can we use the power of words to free ourselves, to bring peace?"

As the conversation continued, we explored these and other questions:

• How can we expect the best of ourselves and others, while also feeling compassion when ordinary people fall short?

• Can people honor our diverse heritages without perpetuating the fears and hatreds of the past?

• What do we gain when we seek to overcome mutual suspicions and reach out to "the Other"?

• How can we help people to use the vital tools of civic engagement and social action to resist the forces of hatred?

This year, and every year, Yom HaShoah helps us to remember, and to appeal to one another as fellow beings with the capacity for moral choice.