A new generation of chefs is taking the farm-to-table trend in local sourcing and sustainability to a new level of culinary inspiration. Call them America’s foraging chefs. They are collecting locally available plants in environmentally responsible ways and serving them in sync with the seasons in a style that belies the plants’ often-unassuming appearance and origins.

Six of these chefs, a farmer and a few friends threaded their way through Atlanta’s rush-hour traffic early one morning in late April and headed for the mountains of North Georgia. Their destination was a mountainside deep in the Cohutta Wilderness that Drew Belline, chef and co-owner of the Italian-inspired restaurant 246 in Decatur and the expedition leader, had foraged before. If his timing was right, he vowed the site would be covered with ramps (Allium tricoccum). 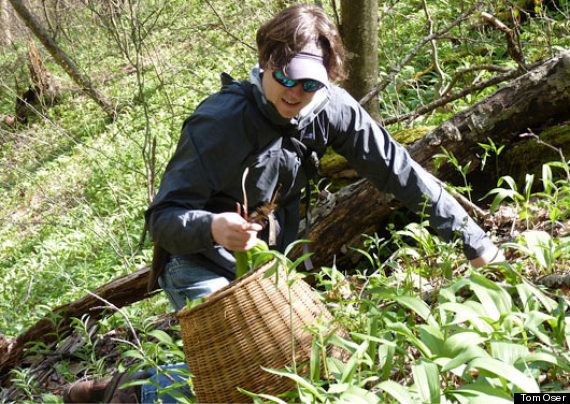 Chef Drew Belline led the expedition to pick ramps in the Cohutta Wilderness in the North Georgia mountains. They hit the mother lode, a hillside with thousands of the plants.

Ramps are variably known as spring onions, wild leeks, wood leeks and wild garlic. They are the first green vegetable to emerge in the spring in much of North America and are harvested at a time when many farmers are still putting in their crops.

The little plants, which only grow about a foot tall, have an underground bulb, a stalk and a pair of bright green leaves. Timing is everything with ramps, Belline said. There is a short window of only a few weeks when they are at an optimum size and flavor for harvesting, he explained. Arrive too early, and the ramps are too small. Wait too late, and the leaves turn yellow and the taste becomes bitter.

Harvested at the right time, though, ramps have a much-sought-after pungent flavor that ranges from a taste like onions for some to garlicky for others. For all palates, however, the appeal that sets them apart from their cultivated cousins — leeks, scallions or chives — is the earthy overtone of the rich humus of the leaf-littered forest floor from which they are collected.

It was this popularity that was on the mind of Belline as he led the chef caravan to the little town of Blue Ridge and then far into the North Georgia mountains. Belline was hoping the locals hadn’t beaten him to the site. He was also hoping he had timed the trip correctly. He decided to go later this year than last because he thought the damp, cool spring the Southeast has experienced this year would delay the ramps’ emergence and growth.

Joining Belline and sharing his hopes were five of Atlanta’s top chefs: Holly Chute, the executive chef at the Georgia Governor’s Mansion; Todd Mussman, chef and co-owner of Atlanta’s Local Three and Muss and Turners in suburban Smyrna; Colin Miles, butcher and charcuterist at Leon's Full Service, a gastropub a few doors down from 246; Andrew Isabella, Belline’s chef de cuisine; and Hector Santiago, chef at the recently closed Pura Vida, which offered Latin American food with a Peruvian flair. 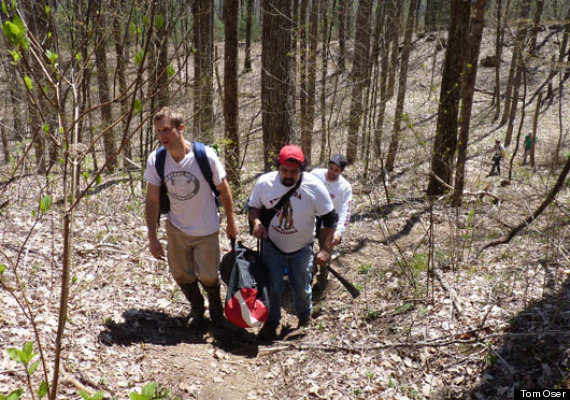 Loaded down with ramps, farmer Jonathan Szecsey (from left) and chefs Hector Santiago and Andrew Isabella approach the trailhead after a nearly mile-long, uphill climb.

After twisting, winding and grinding their way along a paved road that became a gravel road that gave way to dirt, the chefs piled into the bed of Belline’s four-wheel drive truck. Family cars are not designed for what lay ahead — a final jolting ascent up a steep and deeply rutted Forest-Service-type dirt road to a trailhead.

Taking off single file down the narrow trail that at some points looked more like a wash littered with loose rocks than a path, the chefs made their way almost a mile into the forest. Finally the trail came to an opening where the sun, filtering through the still-forming spring tree canopy, lit up the emerald-green leaves of the ramps like a beacon. It was the mother lode. Thousands of ramps, more than it was possible to count, hugged the steep slope of the forest floor.

The chefs fanned out and silently went to work with a variety of tools that in some cases looked more like Medieval weapons than implements for digging vegetables. Prying the prized ramps from the loose earth, they packed them into backpacks, woven baskets and tote bags. By the time they were finished, they had made such a tiny dent in the dense growth of ramps that it wasn’t even apparent they had been there.

Once back in Atlanta, this first spring vegetable, which could easily have gone unnoticed by the casual hiker, has turned up on plates from the Governor’s Mansion to fine restaurants to gastropubs. They’ve been served in a variety of ways, including in a sauté with chicken, mushrooms and white wine over brown basmati rice and in a sauté with lemon, wine and pasta. They have been made into a jelly that will be served with sheep or goat cheese and some have been turned in a ramp kimchee that, when it finishes fermenting, will be served with grilled meats to Georgia Gov. Nathan Deal.

Foraging is not for chefs only. It’s also a great way for home gardeners and cooks to combine a love of nature, gardening and cooking. But, before setting out on a foraging expedition, there are some basic guidelines to be aware of. Here are some "do's" and "don'ts" about foraging to help ensure a safe experience when visiting wild areas near your home and when serving your harvests to friends or family. 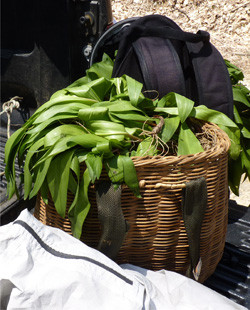 What are your foraging experiences and what “do's” and “don’ts” about foraging would you add to our list?