Forbes magazine on Tuesday published, and then quickly deleted, a column suggesting fraternities should ensure intoxicated women are not allowed into their houses, due to the risk of them falling out of windows or of filing false rape charges against frat members.

The column, "Drunk Female Guests Are The Gravest Threat To Fraternities," was written by contributor Bill Frezza, a graduate of the Massachusetts Institute of Technology. Frezza, a fellow at the Competitive Enterprise Institute, is president of the Beta Foundation, the house corporation for the Chi Phi fraternity at MIT. His column was in part prompted by a clampdown on MIT fraternities following a student falling from a third-story window at the Lambda Chi Alpha fraternity.

Forbes deleted the column, but did not replace it with an editor's note explaining why.

"Mr. Frezza’s post was removed from Forbes.com almost immediately after he published it," Forbes spokeswoman Mia Carbonell told HuffPost in an email. "Mr. Frezza is no longer a contributor to Forbes.com."

Before feminist web vigilantes call for my defenestration, I single out female guests for one simple reason. Fraternity alumni boards, working with chapter officers, employ a variety of policies designed to guide and police member behavior. Our own risk management manual exceeds 22 pages. The number of rules and procedures that have to be followed to run a party nowadays would astound anyone over 40. We take the rules very seriously, so much so that brothers who flout these policies can, and will, be asked to move out. But we have very little control over women who walk in the door carrying enough pre-gaming booze in their bellies to render them unconscious before the night is through.

The column was accompanied by this photo: 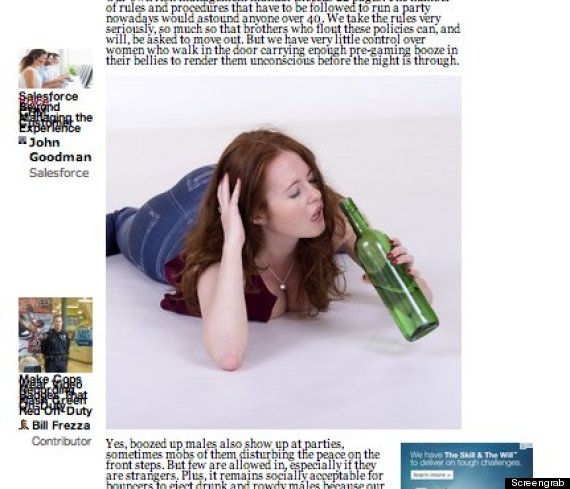 Frezza went on to explain in his post that since the legal drinking age is 21 and fraternities aren't supposed to supply alcohol to minors, female students end up consuming large amounts of vodka and arrive at frat houses plastered. But the difference is women are allowed in, while "boozed up males," as he describes them, are turned away. He wrote:

Here are the things that worry me most. Any of them could result in organizational extinction, even if the fraternity never served the “victim” a single drop of alcohol:

Alcohol poisoning due to overconsumption before, during, or after an event. Death or grievous injury as a result of falling down the stairs or off a balcony. Death or grievous injury as a result of a pedestrian or traffic accident as the young lady weaves her way home. False accusation of rape months after the fact triggered by regrets over a drunken hook-up, or anger over a failed relationship. And false 911 calls accusing our members of gang rape during a party in progress. (Yes, this happened, resulting in seven police cars and thirty officers storming the chapter house.)

Frezza offers the advice that frat brothers shouldn't take a drunk woman to bed, but not because it would be taking advantage of her -- rather, because "it doesn’t take much for a campus kangaroo court to get you expelled, ruining your life while saddling your fraternity with a reputation for harboring rapists."

Frezza told The Huffington Post that despite Forbes' removal of the article, he stands by it.

"I expected it to provoke a conversation and it apparently has," Frezza said in an email. "I am in the process of donning my asbestos underwear," he wrote, adding a smiley-face emoticon.

He urged people to "read the whole thing and not just the gawker 'blame the victim' spin on it."

On Twitter, people's reactions to Frezza's column were consistently disdainful:

How @Forbes decided to publish this is beyond me: http://t.co/VGawbmXX6w. How @BillFrezza graduated from @MIT is even more baffling. Awful.

Frezza began responding on Twitter to some of the critics:

The swarm is attacking. First time I've been on the receiving end of this. No attempt at rational discourse. SILENCE THE BLASPHEMER!

Fraternities increasingly have been beat up in the press, but not without reason. Falls and injuries at fraternities are not uncommon, hazing has too often turned deadly, and members of male fraternities are more than three times more likely to commit rape than other men on campus. For all the news about philanthropy from Greeks, it's buried by news of offensive behaviors committed by frat members.

MIT did not immediately respond to request for comment.

While, Mr. Frezza is entitled to his personal opinions, he does not speak for the MIT IFC community. We are committed to creating an environment where all our members and their guests – both men and women – are safe and behave responsibly with regard to drinking and other activities. I know that the alumni leaders of our community also share this goal, and it is unfortunate that the incendiary comments of one person may be used to attack the work that is being done on campus to discourage harmful behaviors. To reiterate, we do not support his sentiments.

The views expressed in this article do not reflect those of the MIT chancellor or her administration. MIT is committed to ensuring a welcoming, safe and non-discriminatory living and working environment for everyone in our community. With regard to student safety and preventing sexual assault, our approach to prevention is multifaceted, including bystander intervention training and risk reduction strategies. In addition, the Interfraternity Council at MIT has incorporated a sexual assault prevention and response training program into the "party safe" curriculum. MIT has also administered a climate survey to understand perceptions, attitudes and prevalence of sexual assault at MIT and we are using the information obtained to inform our actions to prevent and respond to sexual assault.