Last week Amina Ajmal took the witness stand against her father, Mohamed Ajmal Choudhary, in a New York courtroom. Choudhary is charged with arranging the killings of a young man's relatives because the man had helped Amina escape a "forced marriage."

It is alleged that, a number of years earlier, Choudhary had tricked his daughter into leaving their home in Brooklyn to return to Pakistan, where he forced her to marry a cousin.

In a forced marriage, however, a person is married against his or her will, or that person lacks the capacity to give informed consent, due to age or disability.

As an attorney with Sanctuary for Families, New York's largest not-for-profit agency serving the legal, clinical, shelter and economic needs of victims of gender-based violence, I have seen how the practice cuts across faith traditions, cultures and diverse geographic areas.

According to the Council on Foreign Relations, the top 10 countries with the highest rates of child marriages are (in descending order) India, Bangladesh, Nigeria, Brazil, Ethiopia, Pakistan, Indonesia, the Democratic Republic of Congo, Mexico and Niger.

Forced marriages run afoul of U.S., international and Islamic law. Just last week, as Choudhary's criminal trial unfolded in Brooklyn, on the other side of the Atlantic, Britain enacted national legislation formally criminalizing the practice.

Still, some continue to coerce others into involuntary marriages in accordance with misplaced cultural traditions, and due to discrimination, poverty and ignorance.

It can be difficult to discuss this issue in the American Muslim context, for a number of reasons.

Firstly, in the post post-9/11 era of heightened anti-Muslim sentiment, some community members worry that drawing public attention to such issues may inadvertently embolden bigots who are eager to demonize an entire faith community for the actions of a few.

Secondly, forced marriages are vastly under-reported across faith and ethnic communities. They may be accepted as part of a cultural or family tradition, so they may be difficult to identify and challenge.

Finally, many believe that cases like Choudhary's are not representative of Muslims in the U.S.

Below, American Muslims from across the country share their stories of love and marriage as a matter of choice -- as it should be. They are reflective of the more mainstream American-Muslim experience while also representing a model to be emulated by others. 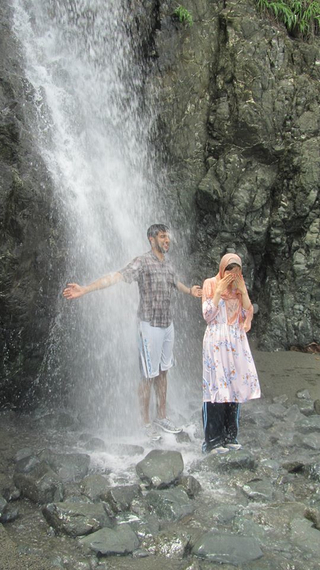 Maha Akhtar, 24, a graduate student in social work at the City University of New York (CUNY), first met her husband, Anas Myint, 26, back in college.

"I was a sophomore and the secretary [of our Muslim Student Association] while he was a senior serving as treasurer," she recalls. "My first impression when he walked in a meeting was that he was a kinda-cute Spanish dude."

Anas wasn't actually Latino but an American Muslim of Burmese descent. As they became better acquainted while planning student activities, Anas developed deeper feelings for Maha. And eventually he told her.

"At first I didn't know what to think," reflects Maha, who just celebrated her one-year wedding anniversary with Anas. "But after a few days I thought it would be a good idea to give it a shot."

The couple fell in love and wanted to get married, but Maha couldn't get her mother's blessings.

"Given our cultural differences and backgrounds, she had a different image and standard of the ideal son-in-law in mind for me," Maha, an American Muslim of Pakistani heritage, explains.

"It wasn't easy at all to get married," shares Maha, "but we both were convinced that we were the right match for each other and determined to stay committed in the struggle rather than move on." 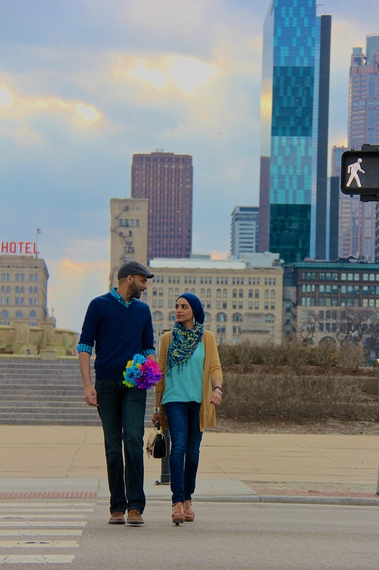 Kinza Khan, 24 and Shariq Athar, 28, met through a mutual friend last year. Today they're busy preparing for their summer wedding in August.

"When it's right, it's right, and you just know," states Kinza, a recent law-school graduate based in Chicago.

The two first initiated the getting-to-know-you process by corresponding via email, since Shariq was based in Texas. Kinza quickly recognized some things that they had in common beyond their shared Pakistani heritage and faith tradition.

"The two things I remember most clearly are when Shariq wrote that he judges people who have complicated Starbucks orders, and he loves cats. 'Check and check,' I thought," Kinza half-jokes.

She suggested speaking on the phone, and he thought that would be a great next step.

"I also gave my Facebook and Twitter link," Kinza adds. "My motivation to do that was the thought that if there is anything he does not like about me based on what he sees, then it's better for us to stop talking sooner rather than later."

The two spoke for hours at a time and explored issues that they consider important, such as careers, the hijab, Islamic values, and moving.

"I convinced him to move to Chicago from Texas!" exclaims Kinza. "He jokes that because I'm the lawyer, I 'won that argument.'"

They soon met and shared news of their relationship with their families.

"When Shariq wanted to tell his parents, that was another 'check' moment for me. I knew he was serious," relates Kinza.

Shariq and his family asked for Kinza's hand in marriage.

"My parents asked me a few more times if I was 100-percent sure, if I knew exactly what I was doing, and whether I wanted any more time. I reassured them that I was sure," recalls Kinza.

Islamic tradition requires the consent of both parties to be wed prior to the actual union. 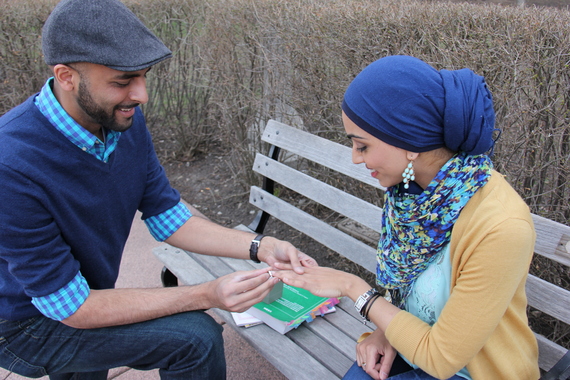 The following month Shariq flew to Chicago for an engagement photo shoot and surprised her with a diamond ring.

"It's been a quick journey so far," states Kinza, "but I've never been more sure about anything in my life." 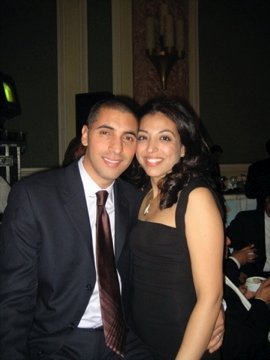 "I think I spent eight years of my life trying to find 'the one,'" reflects Neveen. "One failed engagement, several family-friend setups and a couple of years later, I made a promise that the best relationship I can have is with myself."

Neveen and Samir had been friends for eight years before finding each other.

"He proposed at the restaurant we first met in," Neveen says. "He is my true partner in every way, and an amazing father to our 1-year-old daughter."

Jabeen and Nabil, both age 30, first met as college freshmen at the New Jersey Institute of Technology.

But Jabeen didn't think she was Nabil's "type." In truth, he picked up a minor in her major just so that he could spend more time with her.

"He cared for me through and through, walking me to my car after dark and driving with me to the highway to make sure I was on my way home safely," reflects Jabeen.

"While we didn't speak as much during law school," explains Jabeen, "when we did, we were able to lean on one another like we had just spoken yesterday."

Upon graduating from law school, they each secured judicial clerkships at the same courthouse in Passaic County, New Jersey. And that's when they finally realized their love for each other. 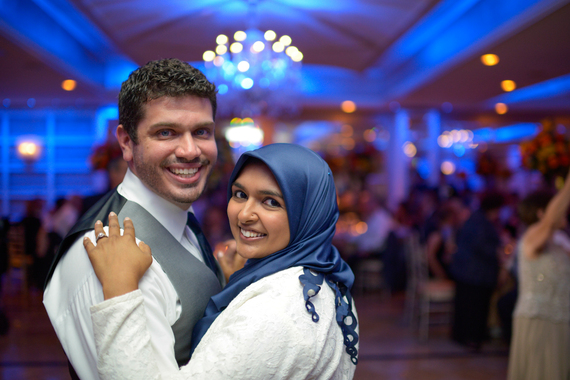 "After years of being in denial, we had the epiphany that everything we wanted in a spouse was right in front of us all along," says Jabeen. "We approached our families independently, and, given our cultural and slight religious differences, they did not take the prospect of us getting married lightly."

Jabeen is a Shia Muslim of South Asian descent, while Nabil, now a patent attorney, is a Sunni Muslim and Arab American.

"It was hard to explain to our families why we felt so passionate about one another, but deep inside we knew it was worth the fight," explains Jabeen. "Almost three years later we've just finished moving into our first home together and are only a few months away from our second wedding anniversary."

As these young couples illustrate, marriage should always be a matter of choice.