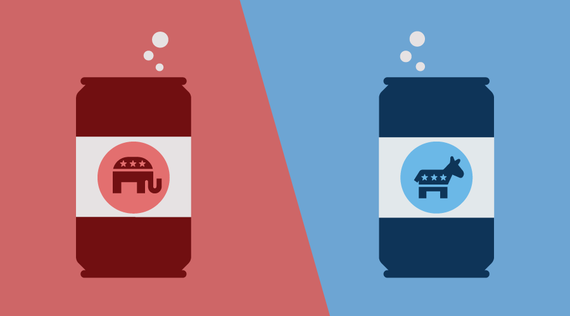 Image credit: Alex Vicuna
Are you Coke or Pepsi drinker? I am sure you have a favorite as between the two rival beverage companies. Everyone does, even your parents.

Both companies have created regional loyalties, built strong brands, and developed distribution monopolies in stores across the country. They sell the brand rather than the sugary contents of their beverages, selling how it makes you 'feel' without reference to the health effects. Sound like any other organizations that are currently forcing America to choose?

The following is an oversimplified comparison of four organizations:

While I happen to lean blue for both of these products, I am forced to remember that these are just organizations formed under the laws of a country that has been around since 1776. The most important thing to remember is that the number one goal of all four of these organizations is self-preservation. A fact that seems more troubling as history is made by both parties through super delegates and a potentially brokered convention.

A short simple reminder as you take the political Coke vs Pepsi challenge this year, choosing the organization that will choose the president.