On a recent ride and drive in Albuquerque, NM, the Ford folks rolled out the 2016 Ford Explorer Platinum trim where improved safety features as well as an extremely comfortable ride means this one will shine in the three-row crossover SUV market. New on the 2016 Ford Explorer expect a refreshed exterior, well thought out improved safety features, tweaked suspension and an engine option, which is a 2.3-liter EcoBoost four-cylinder, and that is all in addition to the top-of-the-line Platinum option being offered in the new year. 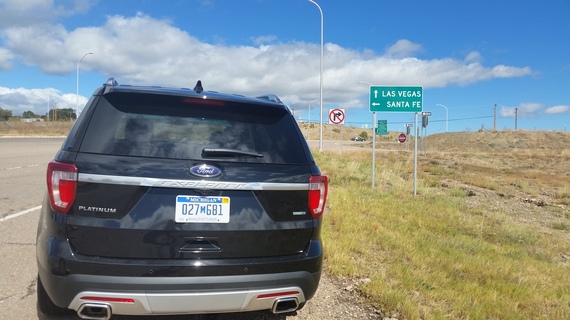 Competition includes the Chevrolet Traverse, GMC Acadia, Toyota Highlander and the new 2016 Honda Pilot, which I have not driven for comparison.

The trims on the 2016 Explorer include the base, XLT, Limited, Sport and Platinum options with the base coming with 18-inch alloy wheels, automatic LED headlights, LED taillights, privacy glass in the rear, roof rails, rearview camera, climate control in the backseat, 60/40-split second-row seat, 50/50-split third-row seat, six-way power driver seat and Ford's Sync interface as well as Bluetooth phone and audio connect and the CD player along with USB/auxiliary audio.

On the XLT you get improved brakes, fog lights, heated exterior mirrors, rear parking sensors, leather-wrapped steering wheel, keyless entry with a code pad and the push-button ignition. There is also the eight-way power driver seat and six ways for the passenger in the front seat.

Packages you can opt for on this one are the Equipment Group 201A with dual-zone automatic climate control, a remote start, nine speakers and a Driver Connect package with auto-dimming rearview mirror, the MyFord Touch with an eight-inch screen display, the gauge cluster and with the 202A package instead of the 201A you can include leather upholstery, heated front seats and front parking sensors. 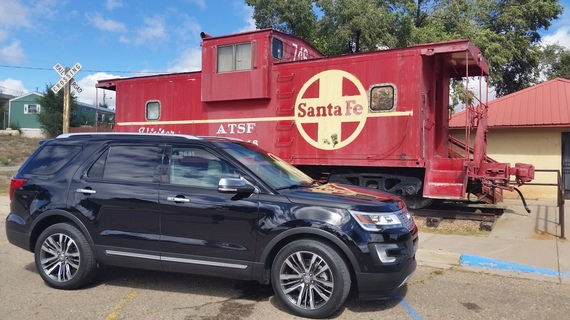 For the Limited it is all the 202A features along with 20-inch wheels, chrome exterior trim, a front-view camera, hands-free power liftgate, power-adjustable pedals, air-conditioned front seats along with second row seats that are heated, power-folding third-row seat and a 110-volt power outlet with navigation and 12 speakers.

For upgrading there is the 301A package offering automatic high beams and wipers as well as auto-dimming driver-side mirror and the automatic parallel and perpendicular-parking assist. There is lane departure and a blind-spot warning system and even massaging front seats and inflatable seatbelts for folks in the second row.

The Explorer Sport has the Limited goodies with 20-inch wheels, sport-tuned suspension and its very own interior and exterior highlights. With this one there is the upgraded 401A package with power-folding mirrors, front-view camera, power liftgate, 110-volt outlet and a variety of high-end safety features with an optional adaptive cruise control as well as a dual-panel sunroof and second-row captain's chairs, these last two options also available on the XLT and Limited too.

With the Platinum trim you get the best of the best including everything from the 301A package on the Limited to the dual-panel sunroof, adaptive cruise control, even better leather upholstery and a classy aluminum and wood trim. The Platinum also boasts a Sony audio system and you can opt for rear entertainment and second-row captain's chairs.

Under the hood, the 2016 Ford Explorer offers a diverse offering of powertrains with six-speed automatic transmission. On the Base, XLT and Limited it is front wheel drive while the Sport and Platinum trim has All Wheel Drive, but on the three lower trims AWD is available.

The Base, XLT and Limited trim has a 3.5-liter V6 engine with 290 horsepower and 255 pound-feet of torque. With this engine, you have your choice of front-wheel drive or optional all-wheel drive. All-wheel-drive models have hill-descent control, hill-start assist and Ford's Terrain Management System with a four-mode system for driving in a variety of conditions.

For the Sport and Platinum there is a turbocharged 3.5-liter V6 engine outputting 365 horsepower and 350 pound feet of torque.

For safety the 2016 Ford Explorer has not only stability and traction control, trailer sway control, front-seat side, side curtain and front passenger knee airbags, but also the MyKey system, which means parents can determined the speed limit their child can drive as well as the stereo control. There is a rearview camera on all trims, but an upgrade with a 180-degree camera in the front can also be added on as can forward collision on trims it is not standard on as well as the brake priming and the lane departure and blind spot warning systems.

Interior impressions, certainly on the Platinum I drove, are classy and indeed, the Ford folks seem to have thought of everything. It took a few minutes to get acquainted with all the goodies included on the Platinum and the massage option in the driver and front seat passenger seat is great for long distance driving. The dash is soft to the touch and the controls all work intuitively with a number of storage space options too. As I was driving the Platinum I had accidentally swerved out of my lane several times and an alert immediately came on with a coffee cup image meaning that I seemed to be tired and needed to stop for a rest before continuing my journey.

As for hauling space you get a maximum of 81.7 cubic feet if you need that much when the seats are down in the back and that's a good size, but still a little less than some of the competition. Overall, for the third row, the comfort level for passengers will be more appreciated if the second row is the version with the sliding captain's chairs, but either way there is still room for adults in all three rows.

Easy to drive, the 2016 Ford Explorer does feel like a big SUV, but it is and either way the ride is still quiet and comfortable and it handles all around excellent for easy long distance and shorter trips where maneuverability and attention to detail is key.

Indeed, for $53,000 for the top of the line and fuel economy ranging from with 16 miles per gallon in the city with the V6 engine to 24 miles per gallon on the highway with the V6 front wheel drive, you can't go wrong and if you need to tow, depending on the trim you can move up to 5000 pounds so indeed, the Ford Explorer really does have you covered.


More:
travelford-explorerfordAlbuquerque
Newsletter Sign Up
An essential daily guide to achieving the good life
Subscribe to our lifestyle email.
Successfully Subscribed!
Realness delivered to your inbox