The number of adults working in public schools has exploded over the past several decades, and it's not necessarily because there are many more teachers. 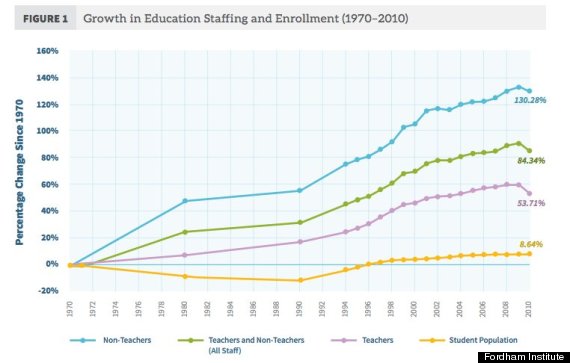 Non-teaching personnel can include classroom aides, administrative support staff or library support staff, although there is a dearth of data on the non-teaching staff as a whole. Still, the report questions why this group of employees has grown so rapidly and whether non-teacher hires are the most efficient use of budgetary resources for schools.

The rapid growth of non-teacher positions in schools began in the 1970s, after the government passed a series of laws that may have caused districts to hire more support staff, such as the Individuals With Disabilities Education Act and Title IX, notes the report. The graph below shows the trend: 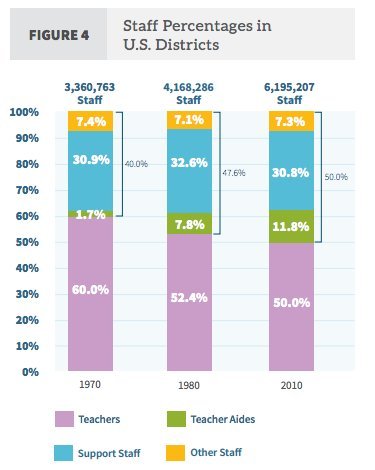 "Before [the '70s], the way people may have looked at schools is that they are there and should do the best they can," Matt Richmond, a Fordham Institute research analyst and author of the report, told The Huffington Post. "But after [these laws were passed] it changed significantly. It went from 'schools should try and do their best' to 'schools better serve everyone in the community or you can sue them.'"

After the 1970s, some people have speculated that the rise of students with special needs may have contributed to the continued explosion in school support staff. But according to Richmond, this cannot be the only reason. He said the number of special education students in a district is "correlated" with numbers of non-teaching staff, but the correlation is "not as strong as one would imagine."

"There is a lot of room for something else. And that’s where the question is –- what is that something else?" Richmond asked. He speculated: "Inertia makes it easy to add a person here and there, people don’t like firing staff members ... [There is] never really a pressure to decrease the number of personnel in a school."

But, this is a trend that is unique to the United States. As the report explains, compared with our economic peers in the Organisation for Economic Co-operation and Development, the United States spends a significantly greater percentage of education money on non-teachers than most other countries. This may be due to a number of factors. For example, in some countries, such as Iceland, teachers tend to spend less of their day actually teaching than American educators do, which may mean they take on support-staff responsibilities in their free time.

Still, this trend does not apply to everywhere in the U.S. As the map below shows, the number of non-teaching staff in schools varies by state. 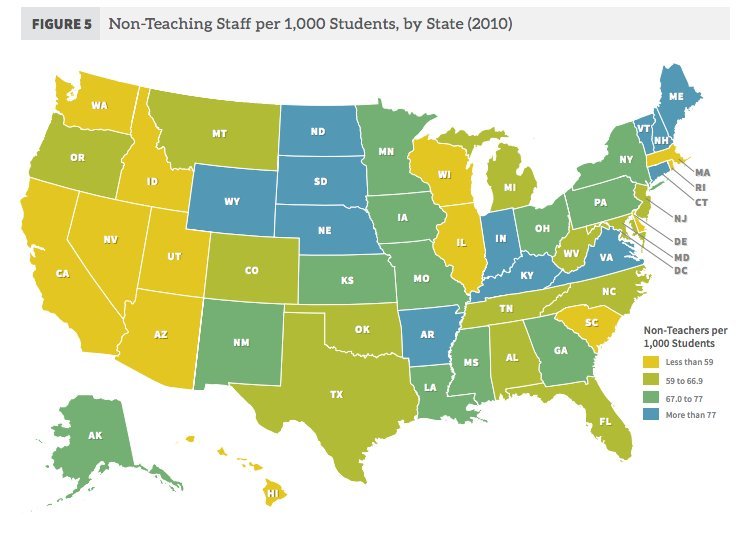 The report does not pass judgement on whether the proliferation of support staff in schools is a good or bad thing, but it does recommend that school leaders further analyze this rarely discussed issue to see if it is the best use of their budgets.

"At a time when budgets are tight and achievement weak, it’s unthinkable not to consider what personnel shifts might strengthen both performance and efficiency," the report says.

And unless more attention is paid to this issue, Richmond hypothesizes, the numbers of non-teaching staff in schools will continue to rise, a trend that may not be sustainable.

"You can't just continually keep increasing the number of personnel you have in schools," he notes.