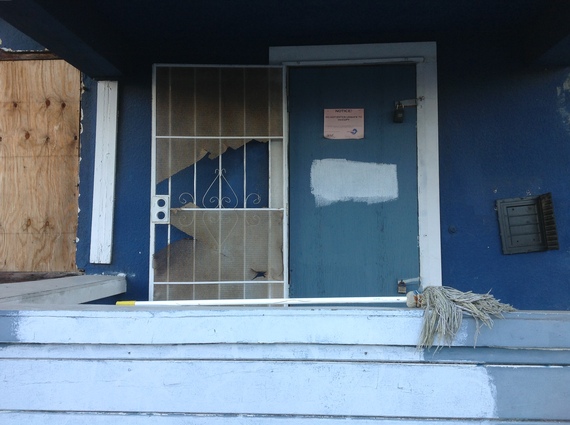 My hometown of Richmond is making national headlines as our courageous mayor, Gayle McLaughlin, has taken the initiative to defend struggling homeowners against mortgage bankers. The city is threatening to invoke eminent domain if the banks don't come forward voluntarily to rewrite the mortgages on homes threatened with foreclosure.

It's a bold and courageous move, and a just one as well. Like many of America's blue-collar cities, Richmond has suffered greatly from the burst of the housing bubble. Richmond's city manager claims that fully half of Richmond's homes are "underwater," with mortgages exceeding present market values. The streets of working-class neighborhoods are lined with boarded up homes, the scars of the foreclosure crisis. Many of these homes have been vandalized and the copper pipes sold by the unemployed for their daily bread. As we know from the "Broken Windows Theory," blight begets blight.

From our mayor's point of view, the blame for the housing crisis rests squarely on the shoulders of the mortgage banks. "The banks sold my community bad loans with their predatory lending practices, and now they want to stop the city from providing a much-needed fix to the problem that they have caused," says McLaughlin.

Many agree with the mayor. There is majority city council support. The Alliance of Californians for Community Empowerment (ACCE) and the Richmond Progressive Alliance (RPA), two grassroots groups leading the community movement in favor of the Mayor's proposal, recently organized a spirited and well-attended rally at Richmond's Civic Center Plaza.

In opposition, realtors, bankers and their allies have tried hard to put the squeeze on the City of Richmond. Wells Fargo Bank, Deutsche Bank AG, and The Bank of New York Mellon sued the City unsuccessfully in an attempt to get a federal injunction to stop the eminent domain plan. Richmond has been threatened with sanctions and litigation by the Federal Housing Finance Agency. The National Association of Realtors and the California Board of Realtors have joined forces and spent over $70,000 on a hit-piece mailed to residents, attacking the plan. Slick ads against the plan are appearing on Facebook and other social media.

I worked for 30 years as a cardiologist in Richmond, and I have always seen the city's problems through the health lens. What can a focus on health teach us about Richmond's foreclosure crisis? What is the impact on the health of families and neighborhoods?

Most of what we know about the health consequences of foreclosure comes from very recent studies. What the researchers are finding is troubling. A study in Alameda County, including the nearby city of Oakland, shows profound adverse health consequences of foreclosure, "wreaking havoc not only on isolated families, but also on whole neighborhoods."

Research on the health impacts of foreclosure has now been done in California, Nevada, New Jersey, Florida, Pennsylvania and Michigan. A similar pattern emerges from all of these studies, showing those foreclosed upon suffering an increase in both mental and physical illness not seen in their neighbors.

Anxiety, depression, suicide attempts, heart attacks, strokes, diabetes, and hypertension all increase significantly in those foreclosed upon. Those facing foreclosure are more likely to be hospitalized or to visit the emergency room for mental health problems (including suicide attempts), hypertension, diabetes, heart attacks and strokes. All age groups, including children and the elderly, are affected.

In addition to the health consequences suffered by individuals and families, there are adverse health impacts at the neighborhood level as well. As foreclosures blight neighborhoods, residents report an increase in drug dealing and violence. Neglected buildings attract pests, vandals and drug dealers. Property values decline, leading to neighborhood disinvestment and a decrease in the tax revenue necessary to fund municipal services essential to health and safety.

The research paints a grim picture. Foreclosures threaten individuals and families with serious mental and physical illness. Entire neighborhoods are negatively impacted, as foreclosures lead to the breakdown of the social cohesion so essential to personal and communal health. To make matters worse, the neighborhoods facing the foreclosure tsunami are the very same ones already suffering the greatest health and economic challenges.

Due to our history of battling tuberculosis, malaria, influenza, cholera, small pox, and, more recently, HIV, we tend to think of epidemics as being caused by infectious agents. The foreclosure crisis is a man-made national epidemic. There are no mosquitoes to blame. No new infectious microbes need to be understood. No new medications need to be developed. The epidemic can only be reversed by sensible public policy.

Interventions on the federal level like The Home Affordable Modification Program, which relies on the voluntary participation of banks, have yielded disappointing results. There are no state remedies on the horizon. Cities like Richmond are left to fend for themselves.

With 900 foreclosures last year and an equal number expected this year, Richmond faces a foreclosure crisis that threatens immense individual, family and neighborhood harm. A successful intervention to turn the tide is necessary.

Professor of law Robert Hocket, of Cornell University, has proposed a creative solution. City governments, using the threat of eminent domain, can force the owners of the mortgage loans to sell them at fair market value. Investors would then purchase the restructured mortgages. The Federal Housing Administration would insure the new debt. Homeowners would then no longer owe more on their houses than the houses are worth. Repayments on the loans would be paid to the investors who bought them. Individuals and families would be relieved of the crushing burden, which causes so much mental and physical suffering. Neighborhoods would be saved from unraveling. And city tax bases would stabilize.

Your own city or town may well be facing a foreclosure crisis. Nationwide, the numbers are staggering. More than 5 million people have already lost their homes to foreclosure. One in five homeowners carries an underwater mortgage. The health consequences of this crisis make a successful intervention an absolute must.

Can the eminent domain strategy work? Again, I draw upon the health lens. Vaccinations are one of the most successful public health tools. They work best when the overwhelming majority of people get vaccinated. In the medical profession, we call this "herd immunity." Just as one vaccinated individual cannot prevent an infectious disease epidemic, one city acting alone cannot stop the national foreclosure epidemic. But can 10 cities acting together? How about 100 cities? Together we have the power to stop this raging epidemic. Ask your own city officials to explore eminent domain as a strategy to support the health of your community!

Vice President of the Board of Directors, San Francisco Bay Area chapter of Physicians for Social Responsibility