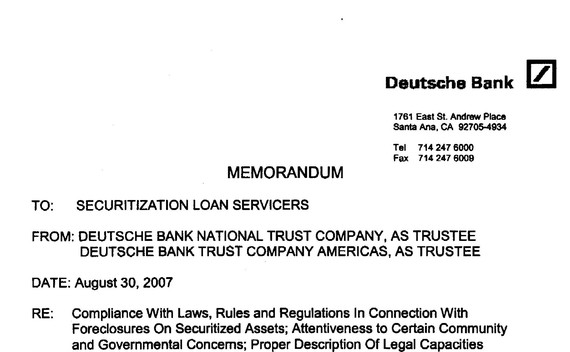 It's one of those questions that seems pulled from a final exam at the Harvard Business School but if you're a homeowner caught in the foreclosure wringer it's something worth thinking about. Now, if you're seeking an answer about the trustee's role from any of the parties suing to extricate you from home and hearth the response, no doubt, will be an unequivocal "no."

When it comes to snatching houses current banking wisdom goes something like this: mortgages (most of them) are held in securitized trusts which in turn hire servicers to collect monthly payments and if something goes awry -- say the homeowner defaults on monthly payments -- the servicer can initiate a foreclosure action on behalf of the investors in the trust. The role of the trustee -- whose name usually appears as "plaintiff" in a foreclosure lawsuit -- is simply that of a passive custodian storing the original mortgage documents ("wet ink," in the vernacular).

It's almost an article of faith in the foreclosure industry that trustees stand idly by as the servicers do the dirty work. Ask a trustee to comment on their role in a particular foreclosure case they'll invariably respond with:

Loan servicing companies, and not {fill in the blank} as trustee, are responsible for foreclosure activity, the resale of foreclosed properties, and other foreclosure-related tasks including decisions regarding loan modifications and evictions. The trustee and servicer are parties to the pooling and servicing agreement which governs the administration of the trust.

Fill in the blank with "Deutsche Bank" and this is precisely the boilerplate supplied by the PR folks when I've made inquiries regarding foreclosures brought by Deutsche as trustee. These cases include a 2007 foreclosure/eviction of a Maryville, Tennessee, couple, Bob and Stacy Schmidt; a 2010 foreclosure of a Los Angeles postal worker, Carlos Marroquin; a foreclosure initiated in 2011 against an Akron, Ohio, couple, Glenn and Ann Holden, and in 2014, a foreclosure targeting Houston, Texas, homeowner, Tommy Cooper.

Pooling and Servicing Agreements ("PSA's"), trustees claim, are the legal handcuffs limiting their role in foreclosures. PSA's are complicated, tortuous, sleep-inducing documents written by legions of tax lawyers defining how investors in mortgage-backed securities can make their money while avoiding the taxman. Servicers contracted to the trust, via the PSA's, are given virtual carte blanche to go after underwater homeowners and as a rule have been quick on the foreclosure draw given they make more dough via eviction than through negotiated loan modifications.

Enter Christopher Wyatt: a homeowner's advocate and former Litton Loan Servicing executive with twenty years' experience in the mortgage game and he's never bought into the passive, standby status claimed by trustees. As head of a Litton team fielding homeowner complaints between 2001 and 2010 he received numerous phone calls from Deutsche Bank lawyers (Deutsche Bank being the trustee) asking him to look into situations where a foreclosure may, in fact, not be a good thing for the investment trusts they represent.

In late August, 2007, Wyatt received an interesting memo from Deutsche Bank referring to "one or more securitization trusts for which Deutsche Bank National Trust Company or Deutsche Bank Trust Company Americas act as trustee." It was a warning of sorts, highlighting the "significant hardship being imposed on tenants, including low-income families, who may be dislocated in the mortgage foreclosure process and about the potential deterioration of neighborhoods surrounding vacant properties."

In short, the memo seemed to fly in the face of common foreclosure wisdom that trustees keep their mouths shed, eyes closed and noses out of any on-going litigation. It called for servicers to follow "good housekeeping" principles and avoid foreclosures "if eviction will not enhance the marketability or resale of the value on Trust REO properties," adding, that "maintaining occupancy may preserve affected neighborhoods..."

I ran the August 30, 2007 memo by Lynn Armentrout, currently the Deputy Director, Housing, Brooklyn Legal Services and someone with a fair bit of experience dealing with foreclosure issues (formerly she served as director of the Foreclosure Project at the NYC City Bar Justice Center)

In my experience, Deutsche Bank as trustee has been completely disengaged from the foreclosure crisis and unconcerned about the impact its foreclosures were having. The memo seems to be written by an entirely different entity, one that cares about communities.

A Deutsche Bank spokesperson questioned about the inspiration for the memo directed me to a Federal Reserve link: "Statement on Working with Mortgage Borrowers," dated April 17th, 2007. It called for financial institutions to "work constructively with residential borrowers who are financial unable to make their contractual payment obligations..." The statement -- which the Deutsche Bank memo mirrored -- called for "prudent workout arrangements" that are in the best interests of the financial institution and the borrower.

With sound advice from the Fed, what could go wrong?

In 2008 the housing market tanked. The global economy went into free fall and while Wall Street was getting bailed out investors in mortgage backed securities scurried about like proverbial chickens without heads. Desperate to recover losses that meant taking aim at the most convenient targets: underwater homeowners. A tidal wave of foreclosure ensued.

Amid the swirling chaos trustees might have stood up and been counted -- following the Fed's 2007 suggestions -- but efforts to maintain the status quo were mounted by organizations like the American Bankers Association which issued a report on November 9, 2010 titled, "The Trustee's Role in Asset Backed Securities," which acknowledged the mortgage mess but fast talked lots of convincing legal mumbo-jumbo about why things should not change -- and they didn't.

The housing crisis -- and foreclosures -- are still very much with us. A change in the playbook to allow trustees a more activist role in helping homeowners stay in place when it is in the best interests of investors should be implemented. Obviously, that would require modifications of existing Pooling and Servicing Agreements.

It would be, as the Deutsche Bank memo indicated, a "'win-win' situation for investors and communities, and provide a model for harmonizing corporate responsibility with our legal duty to protect the interests of securities investors."

Joel Sucher is a writer/producer with Pacific Street Films and has written on foreclosure issues for a variety of publications including, American Banker, In These Times and Huffington Post.