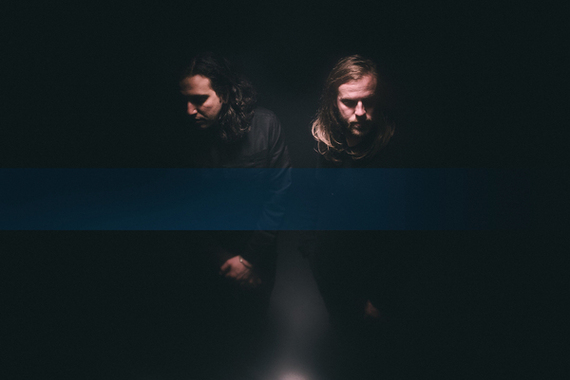 Jesse Clasen and Jacob Michael are ready to get inside of your minds. The duo call themselves Foreign Air and are a different breed of cat from all the other acts that are out there.

The two men established an amazing friendship with each other that goes way back. Jacob Michael told me in an exclusive interview with the Huffington Post, "Jesse and I met about ten years ago. We played in different bands. We were on the same lineup down in Charlotte, North Carolina. I watched him perform and I was really intrigued by his voice and some of the stuff he was doing. We kept in touch and got to know each other over the years. We became really good friends." Jesse Clasen followed up by saying, "The venue where we met, Tremont Music Hall, just shut down not too long ago. When you are touring with different bands--whenever you can sort of hit it off and find a friend on the road it's always something you remember. When you tour with a band for a week you may never really get to that place. It usually takes a couple of weeks to get to know each other and find the groove to become best friends. With Jacob, we played just one show and it went really well. We kept in contact with each other. Over the years, it just developed into a friendship. We shared music online through Dropbox. Whenever I was in D.C. playing with different bands, he would come and hang out. Whenever he was around my area we would go to shows together. Sleep on each other's couches. This project just kind of happened. I don't think it was planned at all." For an unplanned circumstance, the guys have developed an amazing sound that is capturing the attention of music fans everywhere.

Coming together as Foreign Air has been a life-changing experience for the duo. Jacob Michael said, "For me personally, putting out the song 'Free Animal' on SoundCloud has changed my life in a really big way. Prior to that, I came from more of a live music background. Playing different live music instruments. The year before that I was in my bedroom trying to get better to produce music on my own. Getting into production and electronic music, you know? I think it was mainly just trying to find a way to stay into music. Jesse was the first person I thought of. I needed a singer and thought we could write songs together. The stuff Jesse was sending me was already so good. We came from similar influences to be honest. We are into rock music and hip hop. A lot of different genres that you wouldn't think go together. You don't really find people very often who make music in different genres. It felt very natural and easy early on." Jesse Clasen jumped in by saying, "This project has been a lot about using new tools and really diving into it. We are taking that whole mindset of songwriting from more of the '90s hip hop that we grew up listening to as '80s babies. Instead of finding records to sample, we are writing songs like we have always done with real drums, guitars and bass. Then we try to figure out how to chop it up and put them across pads and pitch them differently and see how a song can completely change. This is a new world for both of us." The new world is completely different from what Jacob Michael was used to. The first step for going on to bigger and better things started in his bedroom.

Jesse Clasen explained. He said, "It all pretty much started in my bedroom in Charlotte, North Carolina. Just taking the demos and the ideas we sent back and forth over Dropbox. Getting together in a room in my house and ironing out details and rearranging things. Then we took a hard drive all over the place from New York to LA to Washington D.C. to different studios owned by my friends. Different situations where we would look around the room and see what we could add to the songs. In some places it would be taking out a midi piano and replacing with a real grand piano that might have been in that specific room. Just trying to tie it all together with certain sounds. I think that might be something only we can hear. We started in the bedroom and took it around the country to see how it could develop. We would revert back if we didn't like where it went. It was a very open process where we tried to make the best song that we can." When reflecting on the big date where Foreign Air played at the Mercury Lounge in New York City for their EP release party, Michael said, "I kind of had a moment before the show where I was sitting in the room watching people trickle in. I thought about the past year and how crazy of a journey it has been for us. The whole process has been crazy. We put out a song online and it kind of changed everything overnight for us. We got to meet with a bunch of labels and work in New York to do our thing. Everything in the past year has been a lot of work. We are learning and trying to get better. Also getting to know Jesse and working with him. I feel really close to him. Seeing how he works and challenges himself and challenges me. This is a process of how to write a song. It's been a lot of fun and a giant learning experience. Every day is a new adventure." The party is only getting started for the guys as they have their sights focused on the road.

Jesse Clasen has his eyes on the prize when it comes to touring. He told me, "The live show situation is a lot of fun and also kind of stressful at this point because we have been recording and writing for over a year now. However, in terms of performing this project we are sort of just getting our feet wet. We haven't done many long tours yet. We have done a week here and a week there. A lot of single shows. We try to perform as much as we can including a lot of the sampled stuff. We want to try to bring the rock band background that we have. It's a different challenge in itself rather than recording a song and trying different studio techniques. This is a different animal we are trying to hone in on which is a lot of fun as well." Jesse Clasen cannot wait for October 29th. With a great deal of excitement, he said, "I'm looking forward to playing the Bowery Ballroom on October 29th. It's my birthday and it's also a super sick venue. It sounds great and the staff there are super kind. I've always had great experiences there and I am looking forward to that." Michael agreed. He said, "One of our first shows when we were putting songs out online was at Bowery Ballroom. It was sold-out show. We had a week or so to get ready for it. That was kind of what launched us. It kind of turned us into a touring band. We are booked up for the rest of the year. We are going out to LA at the end of the year. We are doing festivals next year. It's all happening very fast and it's all very exciting. I'm into it."

Foreign Air are also into becoming the best version of themselves as they can possibly be. In an interesting exchange of words, the guys are set on becoming incredible live performers as well as producers. Jesse Clasen said, "I think something that's always on my mind when I'm writing and producing music is to get to that point where I feel 100% confident in what I can produce in my bedroom. Almost to the point where it's released on Spotify or SoundCloud. It's such a big learning curve for me with the big production techniques. That's something I will be getting a hand of a lot more. We can release music a lot faster next year. Being able to rely on ourselves for things like mixing." Jacob Michael agreed. "I think it's pretty accurate. We want to make this experience a little bit more personable and to put ourselves out there a lot more. We are both pretty reserved and quiet guys. We are getting more confidence because people have been so receptive to our music so early on. We are going to take more chances with the music and push ourselves further. To not be afraid to take chances and not be afraid to tell stories that are personal," he told me.

The world is ready for more stories to be told by Foreign Air. Jesse Clasen confidently told me, "This is just the beginning. We only have 4 songs out. We are just skimming the surface--getting close to diving into what the project is really going to be. We will reach that goal of an LP sometime next year."