The Christmas story always includes angels on a hillside in the middle of the night proclaiming, "Peace on earth, good will to all!" Peace at Christmas cannot be understood unless we remember the violence imposed on Jews living under the violent rule of the Romans. 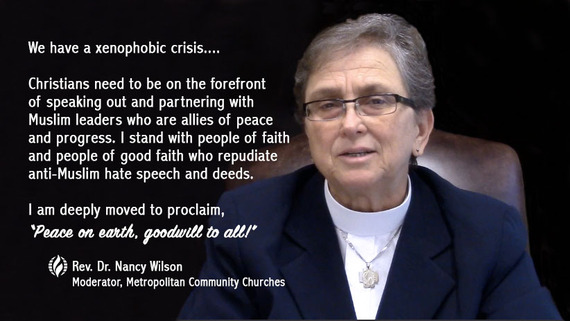 The Magi or wise men from the east--foreigners--came to Jerusalem to ask where the new king could be found. They went to the King Herod, the puppet ruler of Jerusalem, and Herod immediately began plot to kill the new king. Herod cajoled the Magi and sent them forth to find this new king, and to bring him word so that he could worship him, too. Once they had found Jesus, the Magi were warned in a dream that Herod was out for blood. They returned home by a different route. When Herod heard, he put all Jewish boy children under the age of two to the sword. Mary and Joseph had also been warned in a dream and were already living as refugees in Egypt with their young son.

I wonder what Christianity would look like if the Jesus in the manger story included the flight to Egypt and the massacre of Jewish infants?

The Magi, who made the flight of Jesus' family possible, may have come from areas we now call Syria, Iraq, or Iran as Babylonian astrologers or Persian Zoroastrians. An eighth century text, "The Revelation of the Magi," suggests they came from a mystical sect from China as descendents of Seth, Adam's third son.

Regardless, they were foreigners, and these foreigners saved the life of Jesus.

Today, we have a xenophobic crisis where all foreigners are coming under suspicion--and Muslims from Syria and anywhere else in the world are being especially targeted.

A friend of mine who is traveling abroad, dropped me a note to tell me that it is a good time NOT to be in the United States. Other Muslims have said the hostility is worse now than after the attacks on the World Trade Towers in New York.

My friend was a very young child when his family moved here. He was educated here and has called this country "home" all his life. It is important to take in how tragic it is to not feel at home in your own country. He was so relieved to avoid the latest political furor and surge of anti-Muslim rhetoric and threats.

As a lesbian and a person of faith, I understand what it feels like to not be at home in your own country, and even at times, your own family and community.

My heart aches for him and his family as they face the anxieties of going out the door every day to face the studied ignorance of so many people who refuse to accept the facts. I have heard it said that we live in a "post fact" era. This is just another way of describing self-serving bigotry. The world has seen repeatedly that, when mass fear is driven by stereotypes, misinformation, and lies, humanity is capable of catastrophic persecution and mass murder.

As a Christian, who will soon celebrate the birth of Jesus, I have particular obligations to speak words of calm and resolute commitment to the humanity of all people, especially Muslims, in this time of hatred.

Today, Christians must make the story of the Magi central to story of baby Jesus. Foreigners helped bring the Gospel of Jesus to the whole world. In the Hispanic world, Three Kings Day is celebrated with another day of gift giving.

Three Kings Day can also be a day we remember that respect for foreigners is a core Gospel teaching.

In this moment, faith leaders have the opportunity to bring reason and strong leadership to this moment and state the facts more often than the lies.

The strategy of terrorists is to make us react in fear, to make us act irrationally, and to stir up the kind of hatred in us that becomes a recruiting tool. Painting people from a particular religion or country of origin, or sexuality, as dangerous or evil can create a living hell. Hate speech leads to hateful deeds. The only reason ISIS can flourish is because of terrible conditions in parts of the Middle East, vast unemployment, and political conditions that are a legacy of wars and colonialism.

Christians need to be on the forefront of speaking out and partnering with all Muslim leaders who are allies of peace and progress. The good news is there are more people working for peace, for justice for refugees, including LGBT refugees, than ever before in the history of the world. Much of this work occurs behind the scenes, in ways that get few headlines. MCC churches in Europe are working with refugees; MCC Toronto works with Rainbow Railroad to help LGBTQ people find asylum--including Muslims.

As the leader of Metropolitan Community Churches with ministries in more than thirty countries, I stand with people of faith and people of good faith who repudiate anti-Muslim hate speech and deeds. I am honored to work with Muslim leaders.

I am deeply moved to proclaim, "Peace on earth, good will to all!"