Talk about down to the wire!

As that bastion of moral rectitude and good judgment, Goldman Sachs, prepares to market Forest City Enterprises' just-above-junk-rated bonds for the very controversial Atlantic Yards development in Brooklyn -- which includes the most expensive basketball arena in the country (and history, I suppose) -- I'm struck by how tenuous the whole thing is. The bonds are being issued by Brooklyn Arena Local Development Corporation. 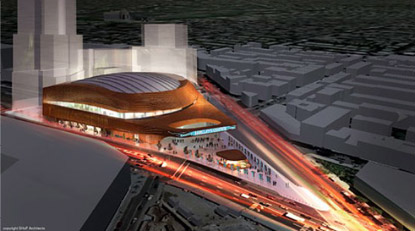 When you think about it, you really have to wonder how Bruce Ratner has found the stamina to persist. I wondered, that is, until I saw how much profit there is to be made when the government gives you much of what most developers would have to buy themselves.

Let's see: There's the deal for acquiring the air rights to the MTA's rail yards for $100 Million less than their estimated value (at a time when the MTA is missing $200 million cash from its budget -- arrrggghh). There's the $100 Million or so that Bloomberg put in the NYC budget for land acquisition assistance. There's those wild payments instead of taxes (PILOTS) if FCE manages to sell the bonds in three weeks, saving them millions. What stinks is that the IRS found such deals so bad for us taxpayers that they've outlawed them, but not until Dec. 31, hence Ratner's rush. Those are just the obvious ones, the things that normal developers, who lack Ratner's tight links to Bloomberg and Pataki, could not easily get.

Now FCE is desperate to sell these bonds before Dec. 31, and the tension must be high considering the numerous obstacles to the successful completion of the project. Some include: A piss-poor climate for selling office and hotel space, most of which has been dropped from the plan; an even worse climate for selling market-rate condos, with a glut of them going untaken right in the general area; and a certifiably piss-poor basketball team, the NJ Nets, which are losing $30 million a year and thousands of fans even when they are supposed to be the big draw for the whole project (they don't even need a new place to play, thanks to their probable move to the state-of-the-art Prudential Center in Newark).

Perhaps the biggest problem facing the project is the distinct possibility of them losing the important eminent domain case that they "won" on technicalities on Nov. 24 -- without which they cannot proceed as planned at all. A motion was filed today for a reargument based on the conflicting decision concerning the finding of "blight" made Dec. 3 in the Appellate Division in the Columbia University eminent domain case, a veritable twin to the Atlantic Yards case. Just to give you an idea of how different this decision was from the other, the Columbia judges called the ESDC's actions "idiocy." And now Gov. Paterson has promised to review the whole deal, especially the use of eminent domain. None of this bodes well for the Atlantic Yards project.

Yet like a typical holdout, Ratner pushes on, despite having announced a 2006 completion date at the start of this awful mess. That's some delay! I mean, his company recently delayed a $5 million mortgage payment, which does not bode well. Even Barclays PLC (which is also helping to underwrite the bonds) cut its naming rights deal in half, it seems (the deal is not clear).

After researching this deal for years, it looks to me like Forest City's bonds are all about an unbuildable, deeply flawed and troubled project. Why would any bond buyer want such stuff? I wonder.