Forever 21's controversial Compton line of t-shirts are now straight outta sight on its website after causing a fury on Twitter. 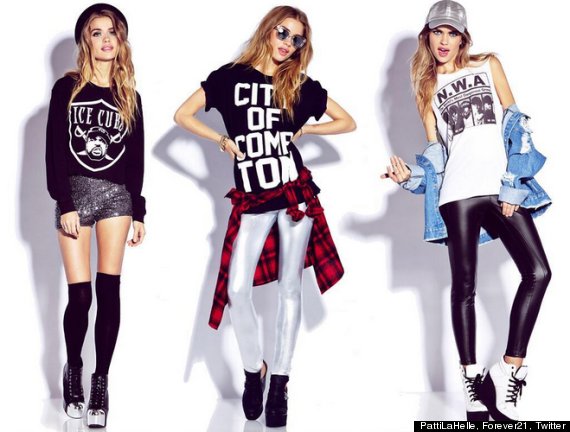 Sparks began to fly Thursday after the retailer tweeted, "New arrivals... straight outta Compton." The tweet was accompanied by the above photo of white models wearing the shirts emblazoned with logos that read, "Ice Cube," "City Of Compton" and "N.W.A.: The World's Most Dangerous Group."

The tweet was quickly deleted after some accused the company of cultural appropriation.

Forever 21. with Straight out of Compton? 99% of the ppl wearing that shit have never been to Compton and know nothing of it. I can’t deal.

Here's a sampling of some other Twitter reactions to the shirts:

Forever 21 really got the three skinniest, whitest, most 949 looking models they could find and dressed them up in NWA shirts. WTF

There's not even a forever21 in Compton! RT @RavennaWhite They didn't even use a black model.

The nerve of forever 21 dropping clothes like that. These little teenage white chick's have no idea what NWA is.