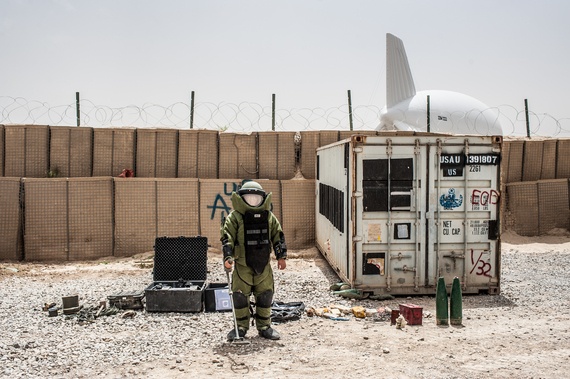 MAZAR-I-SHARIF, Afghanistan -- The 'Ring Road' encircles the heart of Afghanistan.

This stretch of 1,300 miles of embattled and poorly maintained highway has so far cost more than $3 billion in foreign aid to rebuild, along with many hundreds of lives in bombings, ambushes and preventable traffic fatalities.

Moving clockwise, the Ring Road winds down from Afghanistan's fourth-largest city of Mazar at 12 o'clock toward Kabul at 3, then due south to Kandahar at 6 and around to Herat in the West at 9 before sweeping back up north.

Two thirds of the country lives within 20 miles of this two-lane road, which connects 16 of Afghanistan's 34 provinces -- its influence on the country's economic and political future is undeniable. At every turn, the 'Ring Road' provides an apt metaphor for the country's cyclical conflict, a contested arc of history curving through a land that has long resisted foreign occupation.

The GroundTruth Project set out on a reporting journey along the Ring Road as a way to understand where the country is headed at a time when the U.S. is trying to find an exit from the longest war in American history.

To produce the series, "Foreverstan: Afghanistan and the road to ending America's longest war," GroundTruth sent a team of four journalists out on the highway. Along the way, the team sought to understand what has been lost and gained after 14 years, a cost approaching $1 trillion, the deaths of more than 2,000 U.S. soldiers and 20,000 Afghan civilians.

In the first light of morning in early April, a crush of packed buses, honking taxis and three-wheeled flatbed trucks straining with stacks of hay clogged the highway in the city center of Mazar, long a strategic crossroads coveted by warlords and empires. Old men on rickety bicycles shared a crumbling, gravel shoulder alongside young men on loud motorcycles. Roadside tea shops did brisk business and young boys waded through the traffic to sell smoldering incense intended to ward off evil spirits.

Past the city checkpoints manned by Afghan police, heading toward the Qala-i-Jangi fortress, site of the first American casualty in the Afghan War, the highway began to open up. Brightly painted "jingle trucks" barreled along loaded with produce and petrol on their way to and from a prosperous import-export market at the border of Uzbekistan.

It's along this road pocked by craters from roadside bombs, and in some places still unfinished, that the U.S. military will have to navigate its way to ending America's longest war -- if it can.

The final drawdown of U.S. forces was supposed to begin this year, but it has been postponed again and again. 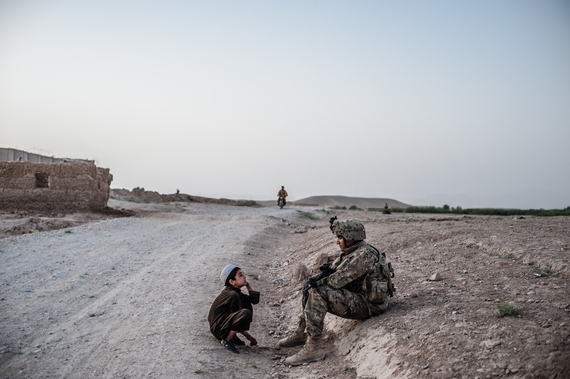 Despite a flag-lowering ceremony on New Year's Day marking the end of the NATO military operation in Afghanistan, the troop presence persists.

In March, Afghan President Ashraf Ghani came to Washington and convinced President Obama to postpone his plan to cut the U.S. troop presence nearly in half this year, and pull out completely by the end of 2016. Now it appears that exit strategy will be pushed back by at least a year.

The Afghan government claims that the Taliban insurgency is intent on returning to power and the self-proclaimed Islamic State is starting to metastasize inside Afghanistan, just as it did in Iraq. It appears that Obama wants to avoid repeating what happened when he withdrew troops from Iraq: the resulting vacuum was filled by ISIS.

Photographer Ben Brody has been capturing images along the road for the last four years, mostly focusing on the U.S. military handover to Afghan National Army troops. His photographs capture the absurdity of the U.S. presence here, the jagged and cynical edge of a war-weary country that cannot seem to find the end of the road in Afghanistan.

Documentary producer Beth Murphy traveled to Afghanistan to document life inside a single girls' school. Through immersive reporting, Murphy has gotten to know the girls and the teachers and the founder of the school. She's managed to capture both the challenges and changes that girls' education has brought to the village of Deh'Subz, where life is precarious.

As the founder of the school Razia Jan puts it, "No one knows what tomorrow brings."

And reporter Jean MacKenzie explored the lives of Afghan millennials who are changing their country. The Pew Research Center defines "millennial" as anyone born after 1980. In Afghanistan, this has special significance -- the Soviet Union invaded the country in December 1979, so Afghan millennials have lived through decades of war.

After the Soviets were defeated by the U.S.-backed mujahideen, the country plunged into civil war. In 1996, the country fell under control of the Taliban, suffering for five long years until the attacks of September 11, 2001. That led to the U.S. invasion and the drawn-out conflict of the last 14 years.

MacKenzie spent time with these young leaders -- teachers, writers, government officials, entrepreneurs, soldiers and parents -- and came away hopeful about their growing roles serving their own country. They offer a glint of optimism along the road where empires have learned hard lessons for generations -- and where the U.S. appears to have learned very little.

Click here to see The GroundTruth Project's complete reporting project, "Foreverstan: Afghanistan & The Road to Ending America's Longest War," featuring stories on the U.S. military drawdown, the situation for girls education, and millennials who are trying to rebuild their country.