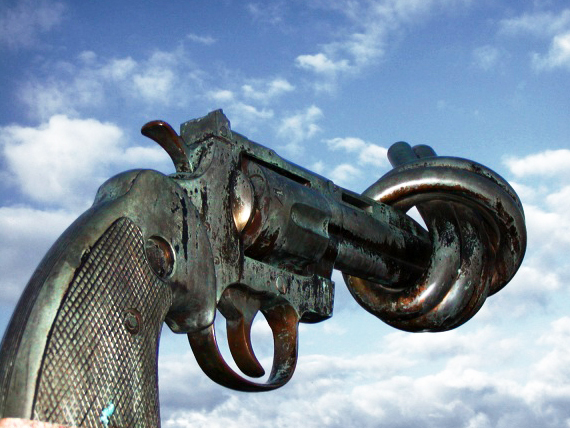 Anyone who's dealt with anger and disappointment directed at another person, who's been bowed by heart-crushing sorrow and depression, who's experienced and gotten past a psychotic episode, or been pumped to irrationality by the adrenaline of rage and despair, knows -- at least in retrospect -- that those impulses coursing through bodies and brains in moments of heightened emotion will and do shift, change, and pass, just as the pitch of the moments do.

Afterwards, when the heat has cooled, when intervention has had impact; when the passage of time has lent greater clarity and less anguish to the situation, most of us can look back at a fight with a loved one and be stunned that a vase was thrown across the room in a fit of anger. We can reflect on a heartbreak that sent us into prolonged grief and question, with some incredulity, why we hit such a nadir of desolation. We can feel shame over an ugly outburst at a waitress, an overly aggressive response to a bad driver or an overwrought reaction to a belligerent child. We can wish we hadn't trashed a gift given to us by a departed lover or promise to be better about dealing with a divorced spouse. The common thread in all of these circumstances is the reality that we are given a new moment. A re-set is allowed, the opportunity to rethink, reassess, and reframe something that was -- is -- TEMPORARY. Transitory, changeable, reparable, forgivable. We often embrace that re-set with profound gratitude that we can do something differently, better, less charged; grateful that we didn't do anything... irrevocable.

Responding to any of the above with a loaded gun.

Three gut-wrenching stories crossed my path today: a retired policeman shooting and killing a father texting his child in a movie theater, a student opening fire on fellow students at a school in Roswell, New Mexico, and a friend's nephew shooting and killing himself after his ex-wife picked up their daughter with her new boyfriend in tow. In each case, the matter of "mental health" will surely be invoked, cries for better gun control will be echoed, but what will not be as transparently and candidly discussed is the simple fact that, in each case, NOT having a gun would have completely changed the narrative.

Whatever anger, mental illness, fear, grief, rage or uncontrollable impulse drives a human being to act in violence, the one factor that is controllable is what objects are within that person's reach with which to inflict that violence. And regardless of hollow arguments about "guns don't kill people, people kill people" (is there a wearier trope??), the ability to -- in that moment of impulse -- pick up an item that can so easily and irrevocably end a life becomes a very salient issue. The theatergoer annoyed by the texting father might have raised his voice, raised a ruckus, even raised a fist, but by virtue of having that gun at his easy and clearly uncontrollable disposal, he took a very minor incident, one we have all experienced in our cellphone burdened society, and escalated it into an act of madness that ended a young father's life and forever changed his own.

The student in Roswell might have picked up a bat and smashed a few desks, knocked over some chairs or even broken a few bones. He might have trashed a locker, broken a window or spewed graffiti across a wall. But leaving a child critically wounded with a shot to the face? Only a gun can inflict that result.

My friend's nephew might have wept and mourned in anguish over losing his marriage and having to now share his beloved child with a man he didn't know. He might have drank himself to oblivion, slashed his wrists, or taken pills to extinguish his grief, but with each of those particular self-negations, there would still be time for him to change his mind or for someone to intervene towards his ultimate rescue. A gun to the head leaves no such options.

Some of the gun people I know insist that it is "protection" that drives their desire to own and accrue a cache of firearms. One fellow, a Texas conservative, gets all "cold dead hands" when the conversation gets to analyzing the role guns play in turning almost any adversarial encounter into something deadly. He, too, cites protection of his loved ones, his home, his belongings as reasons for perpetually packing heat and yet, even those situations can metasticize into unintended tragedy when the immediate response is to reach for and use a weapon that leaves little room for shifting circumstances:

In March of 2013, 16-year-old Caleb Gordley, a universally well-liked but typically rebellious teen, snuck out of his house after being grounded, got seriously drunk at a party, and, later that night, after being dropped off in his neighborhood of cookie-cutter homes, mistakenly climbed through the window of what he thought was his own house (identical to the one he entered). Once inside, he drunkenly made his way through the house to go up to what he thought was his room, but was confronted by the homeowner -- who was understandably terrified with no idea of who this person was clamoring through his home. With a 40-caliber pistol equipped with a laser and flashlight in hand, the man yelled at Caleb to get out of the house, but even as the confused and clearly inebriated boy turned to walk back down the stairs to do just that, the homeowner, according to autopsy results, shot him in the back. Not the leg, not the arm -- the back. The boy died, the homeowner was purportedly horrified once he realized what he had done; the family is destroyed... an all-around devastating situation for everyone involved.

We can anticipate gun aficionados clamoring that "who wouldn't point a gun at an unknown intruder in their home??" -- something we can all surely understand -- but let's play devil's advocate. What if there wasn't a gun? What if the homeowner, instead, had a stun gun, a bat; a knife? Isn't it likely that having that gun in his hand made it too easy for him to pull the trigger (reportedly four or five times) and kill an unarmed teenage boy already making his way out of the house? Of course it is. Guns simply make death -- accidental, intended, suicidal -- far too easy.

Do we care? Hard to answer that question. It appears we care more about owning guns than saving ourselves from them. We care more about being able to carry them, defend them, shoot them, and justify the damage caused by them. We care so much about all that, wrapped in arguments of outdated constitutional amendments, that we've basically agreed, tacitly or otherwise, that we will live in a society where an irate moviegoer can kill someone for texting, an angry child can destroy a classmate out of anger, and a distraught father can end his life out of despair.

I do not want to live in that kind of society. Do you?