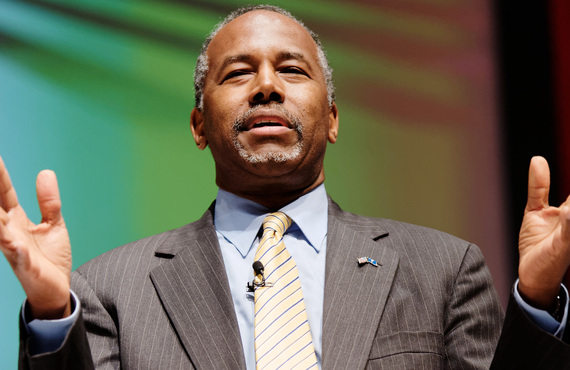 At the widely-panned CNBC debate, much of the chatter around Dr. Ben Carson, a renowned neurosurgeon, had to do with his questionable relationship to a shady multilevel marketing organization called Mannatech. The company peddles nutritional products backed by, at best, highly dubious science. The candidate flat-out lied about his relationship to Mannatech. But that's the least of his problems.

Carson made headlines recently when he compared pregnant women who choose abortion to slave-holders and suggested women were duped into viewing fetuses as "the enemy." He also posited that those who allow women to have legal abortions are akin to individuals who disapproved of slavery and wouldn't participate in abolition efforts.

"During slavery, a lot of slave-owners thought they had the right to do whatever they wanted to that slave, anything that they chose. And what if the abolitionists had said, 'I don't believe in slavery, but you guys do whatever you want'? Where would we be?"

This would seem more shocking if Carson, who was awarded a Presidential Medal of Freedom in 2008, didn't have a history of appropriating slavery as an analogy for apparently any political position he deems incorrect. Many will recall that Carson also compared the Affordable Care Act to slavery during a Values Voter Summit event in 2013. (The event is hosted annually by a hate group called the Family Research Council.)

At the event, Carson delighted the right-wing extremist crowd with his slavery analogy aimed squarely at the country's first Black president:

"You know Obamacare is really I think the worst thing that has happened in this nation since slavery. And it is in a way, it is slavery in a way, because it is making all of us subservient to the government, and it was never about health care. It was about control."

While the casual use of slavery as a rhetorical device is a problem for obvious reasons, Carson's language is especially disturbing because of the coded way he's appealing to white supremacists in the Republican Party.

Tea Party Americans don't like to talk about slavery honestly. Such discussion requires an acknowledgment of both Black humanity and the proper role of government. As Salon/AlterNet points out, some conservative groups have gone so far as to completely rewrite the history of slavery to suggest white Christians of deep faith were the real saviors of Black individuals enslaved in the United States. In reality, churches were often offered a role in the abolitionist movement, but most "refused to take part," according to historian John R. McKivigan.

By framing slavery as just another example of a cultural mistake made by people who needed more Jesus, the Right can completely sidestep the issue of institutional racism found at the heart of an overwhelmingly Christian country. They can also evade discussing the clearest example of the necessity that exists for federal intervention on behalf of groups who face exploitation at the hands of the majority.

Conversely, by elevating abortion and social medicine to the place of slavery, Tea Party extremists can dial up the moral outrage around those issues for their own gain while simultaneously pushing the literal ownership of Black bodies further down the list.

This tendency on the Right is nothing new, but to see such a disgusting part of contemporary Republican ideology being sold to the public through one of the most important Black Americans of the last century is devastating.

As I've written at Salon, Black voters see through the charade and will stop Carson from occupying the presidency. Matt Yglesias even seemed to imply in a Vox editorial that Carson's campaign could be a literal marketing scam. But the impact of Carson's rhetoric exists regardless of the legitimacy of his candidacy.

Voters, and we in the media, have a responsibility to challenge dangerous commentary that belittles the horrors of slavery. As culture moves toward the rejection of deep, institutionally racist forces we've long ignored, the voices of oppression will grow louder and scarier. If we don't refuse to be bullied into submission, they could win.

That's a hell of a lot more important than whether Dr. Carson's "glyconutrients" work or just cause flatulence.

This post appeared in its original form at Care2. Photo by Michel Vadon via Wikimedia.