My New Year's resolutions tend toward the prosaic: hit the gym, call Mom more often, clean out the 12,467 moldy emails clogging my inbox.

But thanks to Ayse Birsel, this year I'm thinking bigger. In 2011, I plan to redesign my life.

Birsel is a New York-based designer famous for her Resolve office system for Herman Miller, a versatile and people-friendly suite of workplace furniture, and for her wildly colorful and inventive M'Afrique collection for Moroso

Over the past couple years, as she tried to juggle her business, her kids, and a commuter marriage between Manhattan and Dakar (and you thought your commute was brutal!), she kept trying to figure out a better way to stay on top of it all, to prioritize things so that she felt like she was controlling her life instead of the other way around.

Eventually it dawned on her: organizing your life is not unlike other design problems she had tackled - messy, unfocused, fraught with constraints and complications. Why not, she thought, use the same processes and tools she would use to create, say, a new line of cookware for Target, to create a better life?

With a bit of tinkering, her plan, "Design the Life You Love" was born.

In November, she rolled out the prototype in a workshop at The School of Visual Arts sponsored by the Academi of Life, an educational organization devoted to exploring the art of living. 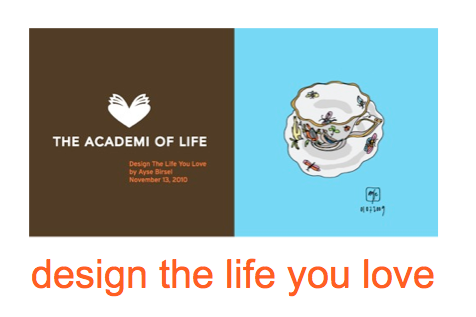 Having tried it, I thought the exercise was a more interesting way to think about the New Year than another round of tired old pledges, sure to be abandoned by mid-month. So I asked Birsel to distill her program into simple steps that anyone motivated to make 2011 better than 2010 can put into practice. The week between Christmas and New Year's is a good time to think about what you want to happen in the year ahead, as the dregs of the old year give way to the fresh slate of the new.

In her studio at Birsel + Seck, Birsel tackles each design project using four major steps: deconstructing the project, developing a new point of view, reconstructing a hierarchy, and expressing the result in a new way.

Sounds tricky, but it's actually fun - which is central to the exercise. A playful state of mind will yield the best results, so put on some music, pour yourself some tea, grab a piece of paper, and play along.

First step: Deconstructing. Draw a little map with all the important pieces of your life in circles: your work, your family, your hobbies, health, sports, places, etc.

This is what a visual map of my life looked like. 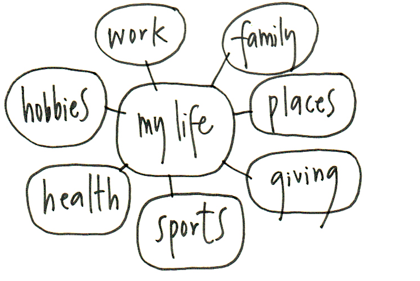 You may want to expand each of those to get a richer sense of what, say, "family" includes. That might mean spouse, kids, grandparents, siblings, etc. Same with work, and with hobbies.

These are the pieces you'll be juggling to find a new, more satisfying, order.

Now, look at this tangle of priorities and think about your current point of view toward your life. It helps, Birsel says, to imagine your life as a metaphor. What would it be?

At the seminar in November, I tried this. It wasn't pretty: My life is a hamster Habitrail. My life is a juggling act, a pressure cooker, a stop watch, a taffy pull. Yikes! Get me a designer!

Next, Birsel says, make a list of your heroes, and think about what it is about their lives that inspires you.

That's easy! Tina Fey for being brilliantly funny, creative, and successful, while not taking herself too seriously. Anna Wintour for her steely commitment to excellence. Paula Scher for her feisty, opinionated, obsessive artistry. Julie Taymor. Cleopatra. Nora Ephron. A theme here?

OK. So we've got a map, a metaphor, and some inspiration. Time to take these ingredients and shake them up.

The next task, Birsel says, is to shift your current point of view on life to a new one, using your heroes as inspiration. First up, imagine a metaphor that would describe the life you would like to have.

Hmmm. Tough one. My life as a paintbox? A perennial garden? A cookbook? A ballet --- seemingly effortless elegance, underpinned with rigorous technique?

In design, Birsel says, she uses tools to shift a current POV to a new and desired POV as a way to solve problems. "Most of us do this intuitively in our lives," she says. "We turn a negative into a positive (constraints into opportunities). We take something we learn in one area and apply it somewhere else (cross fertilization). We shift hierarchies. We put ourselves into someone else's shoes (empathize), we combine two things to have our cake and eat it too (dichotomy resolution). We are jolted into a new perspective by life's events like 9/11, the economy, or the birth of a child (catalyst events). "

Think about the times when you found yourself shifting your point of view on something and think how it might apply to your current life.

Gee. What if I moved to a different city? Changed jobs? Launched a new business? I think we can rule out having a baby....

Time to think about putting all these things back together in a new way. Birsel suggests drawing three circles and dividing them up into the things that are dominant in your life --- where you invest the most energy; subdominant - your secondary investment; and subordinate - the icing on the cake. 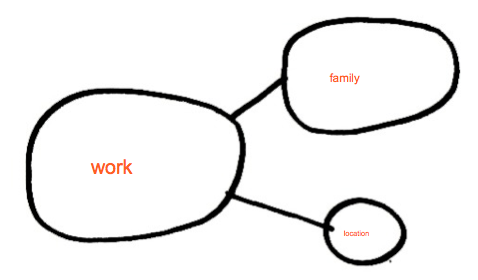 But what if I up-ended it by moving to Paris so it looked like this? 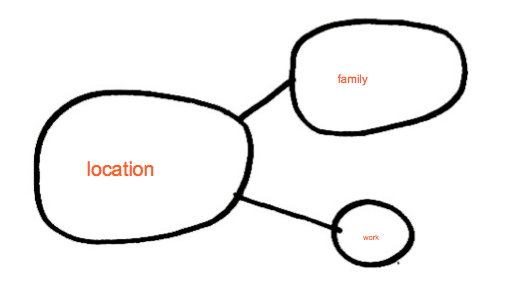 Or if I decided to move to Paris and study painting, so it would look like this? 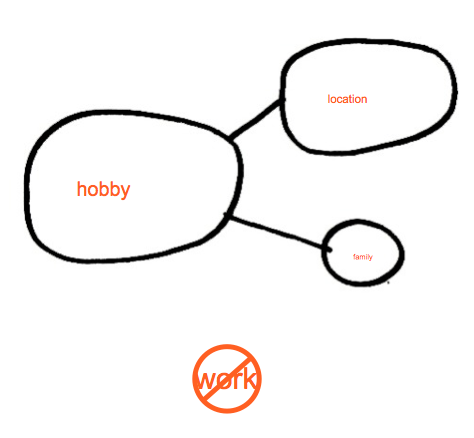 Keep playing with the charts, shifting hierarchies, imagining different things at the center. Keep in mind the metaphor you aspire to, and think about your heroes and the qualities they have that inspire you.

Step four: Express the life you envision in a new way.

In a design studio, this might be the prototype stage. "My teacher Bruce Hanna at Pratt had a saying," Birsel says. "Mock it up before you fuck it up."

So your homework now is to express this new vision in several ways: Write a few sentences describing it.

Maybe now's not the time for that move to Paris. But I'll take a course at MOMA this spring, sign up for one of those painting courses in Provence for vacation, and look for a new apartment where I can have room for an easel.

Do a little drawing of what it might look like, with stick figures. Diagram it. Make it visual. Tuck the picture or your little description in the pocket of your jeans, and start looking for ways to make that vision happen.

Above all, trust your gut. "I often think about what the design critic Ralph Caplan said when he was asked to give a college convocation talk on "If I'd known then what I know now..." ," Birsel said. "I knew then most what of what I've learned since. What I didn't know was how to act on it. That's where design comes in."