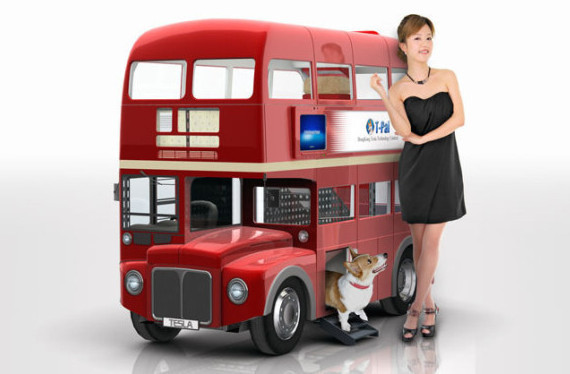 Technology is finally ready to help dogs be just as big of antisocial homebodies as their human masters! Your furry friend can now move on up into T-Pai, a two-story modern marvel built for doggie luxury.

T-Pai will only accommodate small dogs, which should come as no surprise at all -- if watching reality shows on cable television has taught us anything, it's that nothing gets attention and luxury lavished on it quite like a tiny dog. And accommodate it will -- there are enough amenities crammed into this thing to make the Hilton blush.

The top floor of the London-style double decker bus get-up has a tablet that can be loaded up with music, movies and games (which says a tremendous amount about the state of mobile gaming). Owners will also be able to initiate video calls with their dog, if the owner is off at work and starts having separation anxiety. Next to that tablet, there's a smart food dispenser that can be put on a schedule. On the other side of the floor, there's a heated bed that will also wirelessly charge the dog collar that keeps track of your dog's location, should your dog escape the townhouse/prison it's holed up in.

On the bottom floor, there's a toilet of sorts. This area gives off a scent that attracts dogs when they need to relieve themselves . Once that business is done, the toilet area will automatically flush, with the waste going down into a chamber, where it is broken down and sterilized. Seriously, some of this stuff surpasses what is found in smart homes for people. Anyway, there's an automatic gate that comes down while your dog is dropping one, so they don't make a mess of the entire house.

T-Pai is slated for a mid-2015 release in China and North America, for who knows how much money. Just don't let your tiny dog see the video, or else they're going to give you that pleading look, and you're going to be out a lot of money next year.