Milllenials are lazy and self-absorbed, often found taking selfies, telling the world every detail of what they're doing and feeling, hyper-aware of Facebook 'likes', and piling up hashtags in tweets. In short, they're obsessed. With themselves.

At least that's how the stereotypes go; these behaviors have been detailed, chronicled, and parsed for accuracy across many marketing plans. But we need to look beyond popular convention, and for this group that is no easy task. While brands and advertisers are racing to market to this particular generation, we have yet to truly look at the facts.

The main mark for this generation, also known as Gen Y, is that they are the first to grow up in a completely digital world. Millennials formed their opinions, relationships and identities during a time of unprecedented, rapid technological progress. With the speed of technology comes the rapidity with which Millennials do almost everything, including connecting with a brand or choosing the next product.

Marketers are sprinting to keep up, particularly the baby boomer advertiser, who is challenged to grasp all the endless ways to target a Gen Y-er. Money is being wasted on misreading this generation and relying too heavily on biased stereotypes, so we need to rely on data - but not just big data, actionable data.

The real implications of technological savvy

According to a 2010 Pew Research study, 24 percent of millennials say that 'technology use' is what most makes their generation unique. This is nothing new, but as marketers, we need to dig deeper and know precisely which devices and programs would ensure reach of the Millennial consumer: 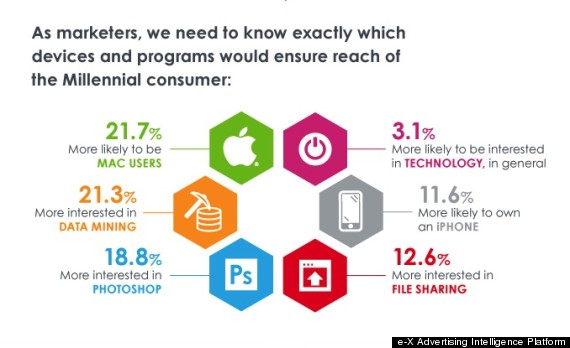 With this technology obsession, it is no surprise that millennials get a bad rep for being distracted, self-promoting, and digitally scattershot. However, can we just assume that their presumed lack of awareness on topics other than themselves is because of their digital obsessions?

According to their online behavior, it is quite the opposite. Technology has created an army of young consumers who, based off our data, are more informed about national and global politics, are generally more educated and follow current events, popular culture, and consumer products more than any generation before: 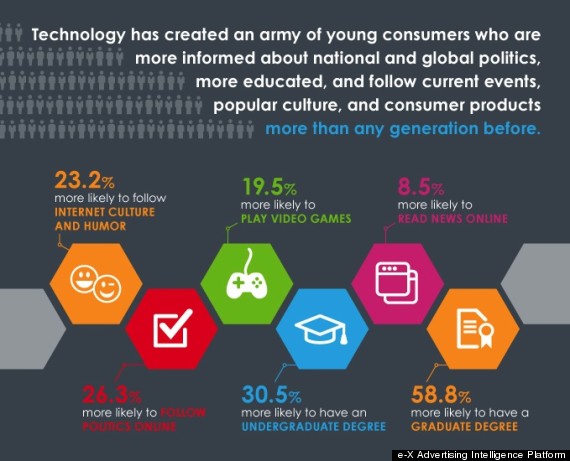 To millennials, the world is small, tangible and highly accessible. Their highly connected nature, with social communities reachable on computers, mobile phones and even video games, encourages this generation to form several distinct world views. Consequently, millennials are the first to see themselves as global citizens, and according to Hewlett et al. (2009), their values are linked with ambition, loyalty, "multicultural ease" and environmental awareness.

And numerous top global brands have taken note of these characteristics, enthusiastically promoting social, environmental or even political causes. Exponential data implies that most advertisers and marketers should expect this "do-good" trend to increase when striving to reach millennials.

Millennials' thirst for culture extends beyond their values, so food and travel marketers should take note. According to their behaviors online, this generation is:

Despite being highly influenced by economic well-being and globalization, millennials are vulnerable to big spending, giving advertisers even more reason to hone in on this segment. Eastman and Liu (2012) point out that this is the most "protected and indulged generation" and therefore has "an inability to delay gratification" (Tucker, 2006, cited in Eastman & Liu, 2012)." 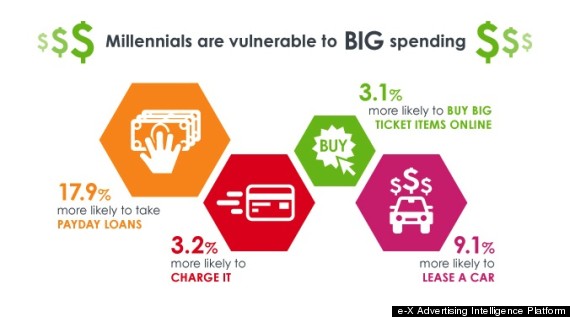 In 2012, Eastman and Liu concluded that the need for status consumption was greater in the Millennial generation than previous generations. The Millennial individual will look to leverage a brand in order to strengthen personal image or boost social prestige.

So now we've dispensed with stereotypes and are down to analyzing the stats: We've been given a tech savvy generation completely open to digital absorption; a generation that personally relates their social identity to brands, providing advertisers with plenty of avenues with which to reach them. We should be seeing more socially-conscious, immersive, emotional brand experiences that capture the mind of the Millennial - executed through the devices across the screens they spend the most time on.

And if you don't get that right, expect them to call you out on Twitter.