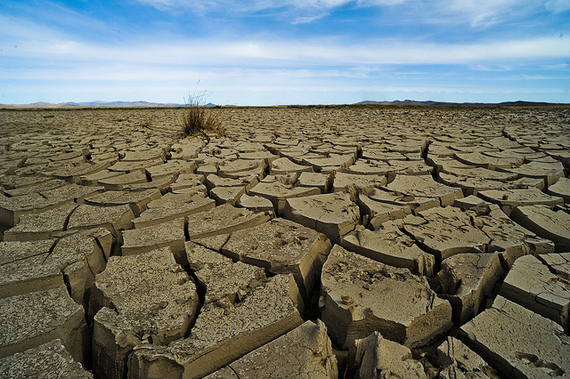 Climate change talk with little action isn't exactly new in the United States - but this time, the talk has centered on the rejection of the Keystone XL pipeline,on the upcoming COP21 talks in Paris, Pope Francis, even the new President Obama Facebook page, which launched this week with a climate theme. But as you scan the headlines you might think that Americans themselves haven't paid much attention. Not one but two recent polls suggest that Americans don't care about climate change and don't worry about it.

That wouldn't be a first either -- Americans also sounded oblivious in the polls last year after the White House released some dire warnings in the National Climate Assessment. But is it really true that so many ostensibly smug, entitled consumers don't even care and don't think it matters if they do? That's not necessarily the case. One study suggests two-thirds of Americans think it is citizens themselves, not just politicians or corporations, who must act and adapt to earth's environmental realities and the future of its people. The odd thing is, they don't actually talk about climate change with the people they trust the most: their family and friends. Maybe the best strategic choice Americans can make is not just ride a bike to work, turn down the heat, dramatically reduce meat consumption or compost the abundant food waste.

Maybe it's just talking -- to each other at first.

How climate change is communicated can be as important as the facts themselves, and the Yale Project on Climate Change Communication is one of many academic research institutions, nonprofit groups and other stakeholders focused on messaging. Each year, Yale releases "Climate Change in the American Mind," and this year's report finds that 64 percent of Americans do, indeed, think it's the responsibility of citizens to do more. That's more than those who think it's the job of Obama, Congress, or their local officials.

So two-thirds think we need to act, but at the same time, 74 percent never -- or rarely -- talk with their family or friends about climate action. One reason may be information access, because 7 out of 10 say they need more to form their opinions, 21 percent need "a lot" more, and only 10 percent say they are already aware that scientists overwhelmingly agree on the role of humans in causing climate change. This last finding is critical, because other studies show it's this very lack of information that serves as the gateway between identifying problems, developing solutions and reaching the belief that we can do something meaningful.

The key to communication -- and this is true in public health, in emergency preparedness and other spheres -- is to craft messages that people act on because they're credible, because they create a shared language among loved ones or in neighborhoods, and because they offer pathways for making choices. Perhaps nowhere is this more important than in the United States, where long-standing consumption patterns in nearly every sphere, in energy, consumer goods, diet, housing choices, will have to change.

Knowledge is power when it comes to making those changes. While there is no shortage of resources available to help improve environmental literacy and empower us to make deep lifestyle changes -- or identify the incremental steps we need to achieve them -- they're not helpful unless they motivate us.

One impressive new resource is The Global Calculator, launched in London -- and it's not just another carbon footprint calculator. This tool offers a comprehensive view of the global challenge and lets the user explore different models and levels of action.

With more than 40 different variable settings, it offers insights on everything from projected home energy needs -- and the imperative for smaller homes -- to the freight distances for consumer goods, food inputs, or offsets for appliances that will become available to the rising middle class in nations still working to achieve access to electricity for all citizens.

The calculator is actually a user-friendly representation of the world's energy, land, food and climate systems, which engages the user in various interactive scenarios about what will or should happen to them. What it reveals is that if we act, there is enough time -- and enough land, food, winter heat, washing machines, vacations and more -- to "achieve both our economic development and climate change goals by 2050."

What is inferred in the details, though, is the degree to which individual excesses need to be scaled back. Indeed, if we are to prevent the rise of global temperatures, what we understand by prosperity will look and feel quite differently in 2050 than it does today.

But not if we don't talk about it. Last November, the Union of Concerned Scientists posted a blog called "How to Talk About Climate Change at Thanksgiving: Recipes for Good Conversations." That may sound like a hilarious recipe for disaster in a lot of families where this issue is highly emotional and politically charged - but it offers smart communication techniques that are likely effective in many settings. If "Tips for Talking Climate Change at the Holiday Party" seems a little awkward, you're probably not alone - but the National Wildlife Federation author has solid advice for "green talk" leading to lifestyle action.

The good news is that most Americans think climate change is a reality and that it's important for them to act on an individual level. They want more information about what that means and how they can make lifestyle choices that help to change all that carbon calculus - and they really do care about climate change. If only the political establishment followed suit...