"Forgetting Sarah Marshall" opened strong over the weekend and is the #1 comedy in America. The film's writer and leading man Jason Segel appeared on the "Late Show with David Letterman" Friday night and explained how he finally found success after five years of unemployment, only have his face taken off the film's posters. "I'm not quite good-looking enough to be the good-looking guy, but I'm not bad-looking enough to be the hilarious guy." He then explained the ad campaign (see one below), "They tested posters with my face on them and there was an unfavorable reaction to my face." 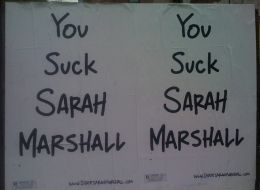