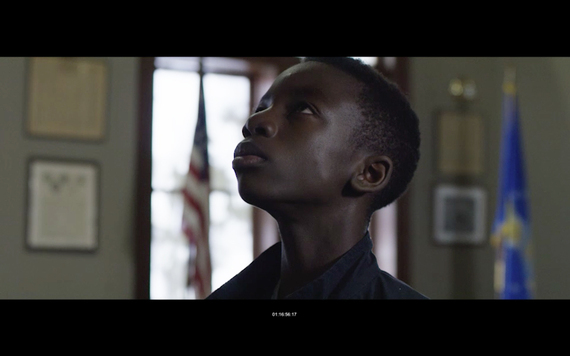 Satie Gossett, writer and director has made a thought provoking film called "Forgiveness." The film creates awareness of the social impact that slavery has made and that healing can make on our future society in America. This film recently screened at the Landmark Theatre in Los Angeles, September 7 through 13, 2016. It is a timely social statement on the issues we face today, through the eyes of a young African American boy, Oliver Burroughs played by Roland Kilumbu. Burroughs learns about the history of slavery in America in his classroom. He enters an essay contest held by the President of the United States and proposes that the President apologize for the historical enslavement of the African American people in order to create social healing in present day America.

Satie Gossett says that the idea for this film short occurred to him when his own young son asked him questions about the slavery that had occurred in his country.

Gossett, owner of Goose Egg Entertainment, storyteller, thinker and image builder says that for the healing process to begin, change has to happen to get different results. His film is creating infectious thoughts of change. People of many ethnicities came to the screenings at the Landmark Theatre and expressed their desire to spread the message of "Forgiveness." How to create congruency to unbind the wounds caused by the act of slavery to manifest social healing was the unified goal of the audience and panel discussion at the Landmark Theatre on September 11th. This response inspired educators to include the screening of the film in schools. They made plans to do so with Gossett after the screening. Gossett was also invited to screen at the Black Caucus Conference in Washington, D.C. on September 16, 2016, by one of the audience members. The future of the film according to Gossett is to enter it in the upcoming Sundance Film Festival. He will also submit it to the Academy on October 1, 2016, to be considered for the recognition of an Academy Award.

Gossett's previous short film, "10 Minutes," a crime drama featuring Louis Gossett, Jr., starring Glenn Plummer and Kent Faulcon was screened at the Cannes Film Festival in 2015. Satie Gossett is a filmmaker to keep your eye on for future waves of social change and education.

The Executive Producer of "Forgiveness," Sandra Evans-Manly is also founder of Films With A Purpose.

For more information about the film go to the website: Filmswithapurpose.net