I'm just returning from Costa Rica, where I co-facilitated the closing session of the Global Wellbeing Lab. The lab was co-founded by the German Government's GIZ, the Gross National Happiness (GNH) Center in Bhutan, and the Cambridge (MA)-based Presencing Institute (PI) in order to innovate beyond GDP by advancing new ways of generating and measuring well-being for all.

The participants are a group of 25 remarkable change-makers from all sectors of society (business, government, civil society) and seven geographic regions (South Africa, Brazil, Costa Rica, the U.S., the EU, Bhutan, and Vietnam). 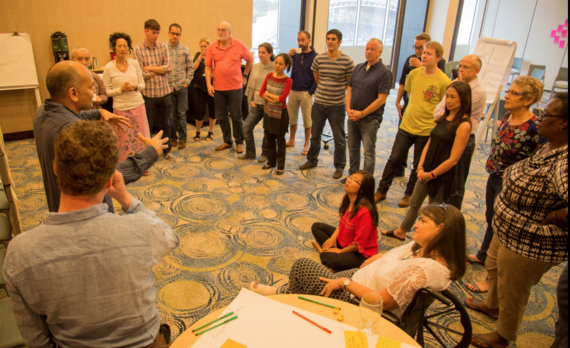 The conversation we had in Costa Rica felt like déjà vu: it was a lot like the conversation I'd been having in my own head for months as I've traveled between Asia, Europe and the Americas. Here are some of the themes that emerged from our Global Wellbeing Lab circle that resonate so well with many of my other recent experiences:

1. We live in a period of duality and disruption.

Terror. Trump. Tax evasion. Tensions and polarization. European Central Bank running out of options to steer the financial system away from deflationary risk. The next financial disruption apparently just around the corner.

But then, in the midst of all these ailing or failing systems, we also see new seeds sprouting. For example, the widespread compassionate response of hundreds of thousands of volunteers in Germany, Sweden, and many other countries to the millions of refugees streaming in from Syria and other regions.

It seems to be a signature of our time that old-style nation-states built on mono-ethnic and mono-cultural contexts are being infused with ethnic and cultural diversity from around the world--thus prompting countries like Germany to shift their national identity from shared blood to shared ideas.

The Germans who applauded the arriving refugees from Syria at Munich's train station last year were not singular outliers on a late-summer party weekend. They expressed a genuine feeling that exists in most parts of the country (except in some of the Eastern parts of the country that had been isolated from the rest of the world for too long by Soviet style socialism). That positive feeling, in spite of the exhaustion that has also started to kick in, is still there.

Go to any town or city in Germany today and you'll find countless volunteers doing an amazing job to welcome and support the newcomers. The same is true in Sweden and other countries, which continue to welcome arriving refugees. It's so common that many journalists are no longer even writing about it.

Figure 1 sums up these two forces: as disruptive changes keep coming our way, we see two very different responses from communities: opening up (by activating curiosity, compassion, courage) and closing down (by activating prejudice, blame, and fear). 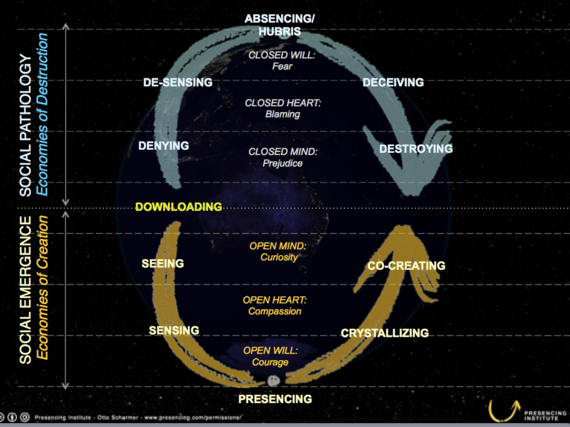 As discussed earlier, its easy to become trapped into the cycle of absencing (prejudice, blame, fear).

2. Media as an echo chamber for prejudice, blame, and fear.

Because they benefit from doing so, corporate media tends to over-report and amplify the story of closing down while under-reporting the story of opening up. But it's not just corporate media: social media also greatly magnifies this problem. The recent so-called Facebook revolutions, from the Arab Spring to Occupy Wall Street to demonstrations in Istanbul, Kiev, and Hong Kong, all failed to sustain a positive momentum. Tom Friedman asked in the New York Times recently whether social media might be better at breaking things than at making things. He cites Wael Ghonim, the Egyptian Google employee whose Facebook post helped to start the Tahrir Square revolution in 2011, and who, in a recent TED Talk, linked the failed Facebook revolutions to the structure of social media that favor broadcasting rumors and divisive echo chambers over reflection, consensus building, and generative dialogue.

3. The shadow brings the light

"The shadow brings the light" said Louise van Rhyn, an education activist from South Africa and fellow member of the Global Wellbeing Lab, about her experiences with disruptive change. It reminded me of how Mephisto introduces himself in Goethe's Faust: I am the force which always wills evil and always effects good. We all know that the presence of a huge shadow--such as a terrorist attack--can make us stop, slow down, connect to each other, and respond from a different inner place, in service of a more compassionate future. But is that an automatic mechanism? Apparently not.

Think about George W. Bush and Dick Cheney's disastrous response to the 9/11 attacks, which led to the Iraq war. Think about the rise of extremist right-wing parties and politicians across Europe and the United States. Donald Trump (and his European predecessor Silvio Berlusconi) is one embodiment, but not even an outlier of that phenomenon. Whenever we face disruption, both of these responses are available to us: closing down (regression through prejudice, blaming, and fear) and opening up (evolution through curiosity, compassion, and courage).

What is the inner capacity that allows us (a) to notice and (b) to make that choice? That inner capacity is called awareness, consciousness, or self-knowing. It is, in my view, the single most important leverage point of our time for advancing positive change.

Energy follows attention. Wherever you put your attention as a leader, that's where the energy of your team tends to go. Put differently: Form follow consciousness. It's the quality of your awareness that co-shapes what happens around you. I pay attention this way, therefore it emerges that way. Marian Goodman, my Presencing Institute colleague from South Africa, summed up much of the circle conversation of the lab by remarking that the noise around us will not stop, it will keep increasing. But then, she asks, how do you cultivate the inner sources of stillness as a way of dealing with the ever-increasing noise? How do you actually do that? What does it take?

It takes a journey. You need to take entrenched stakeholders on a journey where they experience a situation without their usual armor of habitual judgments. You go on this journey in order to practice deep listening to each other, to the whole, and to what is emerging from oneself. It's these practices of deep listening and stillness that often have the biggest transformative impact.

Here's one example of how this works in practice: Last month I attended a week-long workshop in Shanghai with a group of city and provincial government leaders and their stakeholders across sectors. At the start of the week, the group shared experiences and learnings they had with each other since this process started in October 2015. We also went on a joint learning journey where we visited a research university that specializes on TCM (Traditional Chinese Medicine) - an eye-opening experience for all of us. Mid-week we moved into a space of deep reflection and stillness in the form of silent solo time in nature. Luckily, the smog over the city cleared for that day. Sun and blue sky emerged. At the end of the day the group reconvened and shared their experiences. Everyone felt moved to a different inner place. As one government official put it:

"I, for the first time in many years, noticed the moon during daytime. Usually I am so busy. I keep my head down and attend to meetings or to my digital devices. In normal life I would never raise my head to see the moon. I wonder, what would it take to give permission to the heart of the collective to see the moon that rises over our city?"

You could hear a pin drop after he said that. I love the way he phrased it: give permission to the heart of the collective to see the moon. In every process of transformation that I have had the privilege to witness over the past few years, this has always been one of the single most important turning points: activating the intelligence of the heart, not only in the individual, but also in the collective. 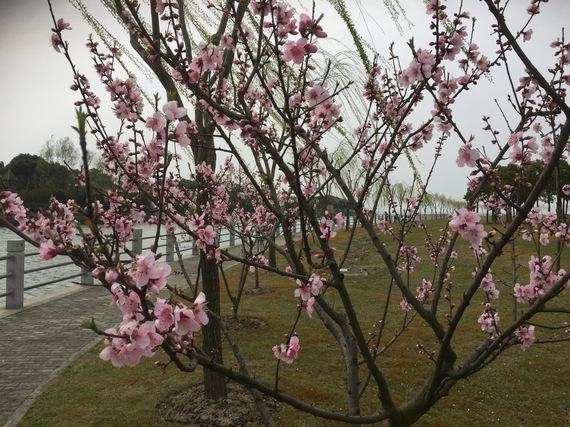 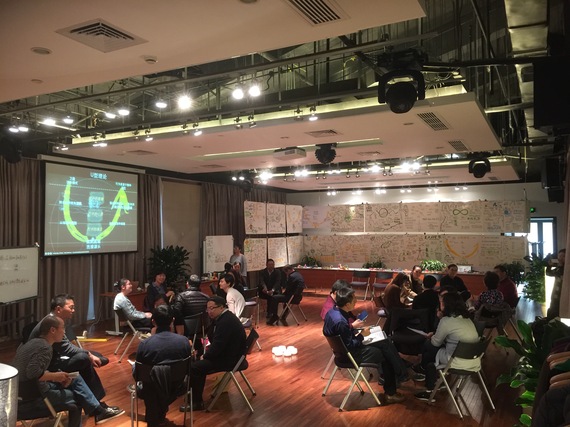 Another turning point during that week was a practice we at the Presencing Instittue call 4D Mapping, where the group embodies stakeholder relationships using a process that combines mindfulness, co-sensing, and theater. Stage 1 of that mapping represents the current reality of a given situation. Stage 2 represents possible futures. One of the rules in this mapping is that you cannot embody your own role, you have to step into the role of another stakeholder.

What this 4D mapping, combined with the solo reflection in nature, does is that it makes a social system sense and see itself. And that is, in my view, the single most important leverage point for systemic change. When you witness a system beginning to sense and see itself, you see a shift of consciousness in the social field in real time-that is, the quality of listening and interaction amongst the stakeholders. From where to where? From ego-system to eco-system awareness, that is, from a silo-view to seeing the situation from the whole.

Next week I will post part II of this column that features some hands-on stories from participants of the lab that exemplify key aspects of this subtle field shift on different levels of scale.

Thanks to Adam Yukelson for the first picture and helpful comments!