More than two decades later, D.C. artist and photographer José Varela credits his Guantánamo detention with preparing him and other Cuban refugees for a transition to American life

"Close Guantánamo!" The name invokes images of a remote island prison for orange-clad terrorist suspects. But with $240 million in upgrades planned for the U.S. naval base, its immanent closure is unlikely. The 45-square-mile base has undergone many previous incarnations. Seized during the Spanish-American War, when the U.S. assisted Cuban independence, it has been leased from Cuba since 1903. Castro's government cashed one rental check, but refused to cash any more, characterizing the territory as stolen and demanding its return. Landmines and an 8-mile barrier of Opuntia cactus planted by Cuban troops in 1961, the so-called Cactus Curtain, were designed to prevent Cubans from crossing over. Still, ten political dissidents slipped into the base in 2011.

Despite "Gitmo's" inglorious history, a former rafter who spent 14 months there actually appreciates his detention. He is José Varela, a DC artist and photographer, American citizen, and Corcoran art school graduate now living with his long-time partner Christopher in Washington, DC. "Guantánamo really prepared us," José declares. "It was our school for democracy and gave us hope." His home still displays artworks from his Gitmo days.

Today's controversies about the naval base have obscured its former value as an Americanization crucible for Cuban rafters. The 1966 Cuban Adjustment Act offered refuge to Cubans fleeing their homeland. But departure by sea was always a life-or-death journey. And, under Cuban law, citizens were prohibited from leaving or assisting others to leave without permission. Intercepted rafters could be imprisoned for up to 10 years. But thousands took the risk and many died at sea. On July 13, 1994, Cuban authorities sank a fleeing tugboat, "13 de Marzo," killing 41 people. That served as a warning to others.

But by August 1994, when the number of Cuban boat people had become a tidal wave, President Bill Clinton announced an abrupt shift in U.S. policy. Rescued rafters, including children, would no longer be brought to the mainland, but taken instead to the Gitmo base and never allowed into the United States. After all the perils they had endured, those diverted to the base protested at being sent to territory actually still considered part of Cuba. Clinton held fast to his resolve for almost a year. Not until mid-1995 would he begin allowing the detainees into the U.S. By Oct. 1995, almost all had been admitted and the current wet-foot/dry-foot policy had been officially declared, with the Coast Guard returning Cubans rescued at sea back to Cuba proper instead.

On August 30, 1994, just after his 30th birthday, José set out on an unauthorized sea departure. Why? Why, indeed? Relatively speaking, he was doing fine. Despite his youth, he held a prestigious position as head librarian at Havana's National Museum of Art. Yet he earned only $1.50 a month and, he says, a bottle of shampoo at the government dollar store cost 50 cents.

He also belonged to a Baptist church, but, "We had to hide our faith." Still, church membership provided a sense of quiet defiance because of official disapproval. "We led a double life," José recalls, "Inside our home, we could relax with family and trusted friends, but outside, we had to watch everything we said and did. Even in our own neighborhood, we were not free, because someone might snitch to the secret police."

Yet José appreciated many aspects of his job. As an artist himself, he enjoyed being surrounded by artworks and deciding how to display them. In 1989, when he was only 25, he helped arrange an international exhibit of Asian and African art with artists from abroad, "A great privilege, since, otherwise, being seen walking down the street with a foreigner could get you arrested." He also arranged exhibits of paintings by one of Cuba's most famous artists, Wifredo Lam, once a Picasso associate. With meticulous sleuthing, he recovered ten paintings stolen from the museum. Even the police thanked him: "The Revolution is proud of you."

José's father was living in Canada, where he'd stayed after visiting relatives. He sent money whenever he could, allowing the family to buy food from government dollar stores to supplement their meager official rations. José lived with his mother and younger brother in cramped quarters near Havana's Malecón, the old seawall. One day, he packed a bag, telling his mother he planned to visit a friend in another town. Instead, in the quiet of pre-dawn darkness, he crowded onto an old wooden motorboat along with 21 other passengers. Among them were relatives of Mario Chanes, the world's longest-known political prisoner and once Fidel's close confident, held almost 30 years, longer even than Nelson Mandela. Chanes had recently been released and had left for the U.S., so his family sold everything to acquire a boat to join him.

After only a few hours at sea, the balseros, rafters, ran into trouble. "But technically," José explains, "we were boat people, not rafters. Yet, we still identified with the balsero exodus." Their boat's motor had suddenly sputtered and died, and the rotten floorboards had begun taking on water. Fortunately, Hermanos del Rescate, volunteers in a small aircraft flying overhead (later, shot down by the Cuban military), alerted the U.S. Coast Guard, so, by noon, they had been rescued by the Coast Guard, which fired to sink their empty boat to prevent the appearance that its occupants had drowned. But instead of going to the mainland, as would have happened previously, they were taken straight to Gitmo, eventually joining 33,000 other Cuban refugees there.

Every refugee was given a T-shirt and a bag containing a towel, soap, and toothbrush. After being screened, each was outfitted with an ID wristband. Some turned up their noses at unfamiliar food: salad, turkey, and corn, served without rice, a staple of their former daily diet of black beans and rice. Many protested about a double-cross, complaining that they had risked their lives to go from one island prison, Cuba proper, to another. A few even went on a hunger strike. Eventually a handful returned to Cuba and an unknown fate, but José held fast, "After all we had gone through, I vowed to stick it out."

After their initial protests, most refugees soon realized that being on the base was not so bad. They had enough to eat, showers, and eventually moved from tents to wooden houses raised on stilts above the seasonal mud and dust. Because the Castro government had cut off the water supply, ocean water had to be desalinized, a costly procedure, but enough water for drinking and bathing was provided.

And life was busy and full. Detainees joined sports teams and attended the church services--or none--of their choice. There were schools for kids and English and computer classes for adults. José was especially fascinated by computers. "We learned how to write checks and balance a checkbook for the very first time," José recalls, "We'd never had the experience before of making group decisions or of organizing events from scratch, like an art show I mounted at the base. We even wrote for our own newspaper. And we also elected our own leaders." Entertainers like Gloria Estéfan sang for them. It was an exciting time, "Yes, we were enclosed, but we felt free and we had hope, because if we were being taught English and U.S. history, then surely we were destined to leave. It really was a boot camp for becoming Americans."

Back in Havana, his worried mother tuned in nightly to Radio Martí, her ear pressed up against the radio so as not to alert the neighbors, listening anxiously for the names of Gitmo detainees. Finally, she heaved a sigh of relief after hearing her son's name and knowing he was safe.

José is convinced that the refugees' experience at Guantánamo was invaluable citizenship preparation: "When we finally came here, we already knew some English, the basics of the political system, and how to get around, so it wasn't such a shock. All refugees should be so lucky. Of course, there was uncertainty at first, but I always believed in my heart that we would make it." He gives high marks to World Relief Corporation, a U.S. government contractor, for organizing such a helpful refugee program. Other Gitmo rafters in touch with José agree that their detention turned out to be a crucial life passage. Regarding his own stay, Dr. Renato Domínguez told the New York Times, "I polished my English. I learned to write medical histories like the Americans. I made good contacts. "

Some elderly Cubans still consider the base their home. Those working there before the revolution, called "special category residents," remain by choice. There is an assisted living facility and a graveyard for the departed. Although these residents could always go to the U.S. and may be airlifted there for medical care, many prefer to return to the base.

For José, his stay was only temporary, but he considers it time well spent, enhancing his current life in Washington, DC. Looking back, he says that being at the camp was informative, often fun, and provided lasting friendships. He is still grateful for the experience. 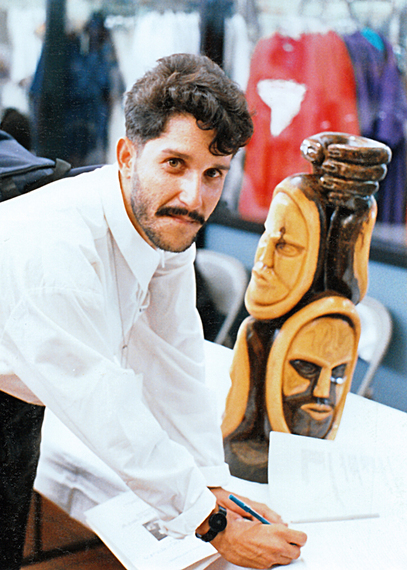 José arranging a rafter sculpture as curator for a Guantánamo art show, 1995 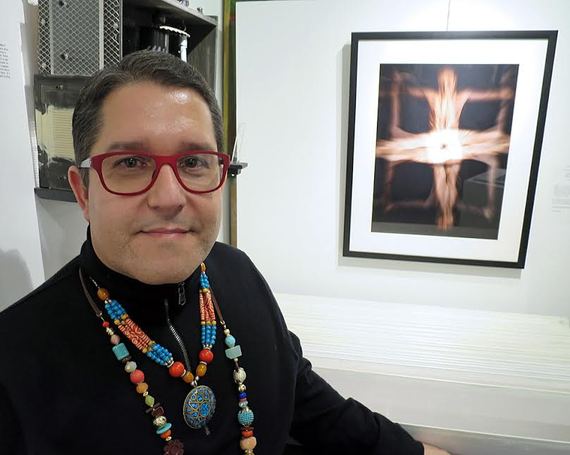 At Watergate Gallery, Washington, DC, José next to one of his own photographic pieces