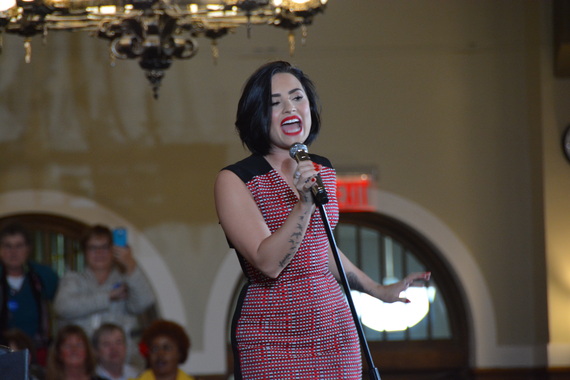 Lovato was pretty 'Confident' in Clinton, "I truly believe there is nobody more qualified to run this country," Lovato said.

But, not everyone in the U of I crowd was as 'Confident.'

"All we got was I think a five minute kind of celebratory speech and that was it," said Eric Dirth, 24, an U of I law student. He was just one of many who were left with a bad taste after the night.

The event was meant to attract younger Iowans as Lovato performed four songs with three of her band mates for nearly 2,000 people.

Scott Lacombe, 22, a grad student studying political science at U of I attended the event and said he came to see Lovato, but was interested to hear from Clinton.

"I think most people were, honestly, here to see Demi Lovato," Lacombe said, as the crowd quickly began to dissipate after the performance, "It was funny to watch people leave after she performed."

After reading Clinton's autobiographies, U of I student Maggy Preigh, 18, was excited to see the presidential candidate in person, but was disappointed in her lackluster speech.

"It was really broad.... I was kind of disappointed that it didn't have substance," said Preigh.

Despite her attempts to connect with college students, Clinton left several students dissatisfied after her nearly 6-minute speech.

"I was looking for more of a speech." Lacombe said. After visits from several other candidates, he was hoping to hear another 20-minute speech like those of the previous candidates who had visited his campus.

Some millennials in Iowa were not pleased with Clinton's lack of engagement and have since changed their stance on Clinton.

"I'm definitely an undecided voter and this has definitely swayed me away from her," Lacombe said.

And the lack of interest from Clinton changed Dirth's mind.

"We were contemplating going to caucus for her but I don't after tonight," he said. The law student said he understood this was a younger crowd but wished there had been something to motivate those on the fence.

"This will definitely leave me thinking about who I want to vote for... it's not like this swayed me," said Dirth. 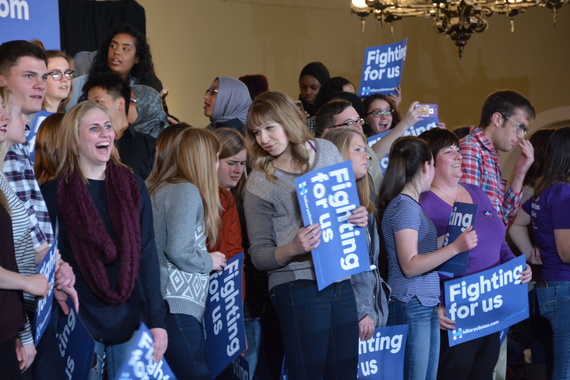 Students gather to support Hillary at the University of Iowa, Jan. 21.
PHOTO BY: Aimee Schnebeck

But other students enjoyed Clinton's visit despite the shortness of her speech.

"It was so worth it!" Shannon Werts, 18, said. "It was a little on the short side, but I could hear her [Clinton] talking that she is for everyone in the United States and women. It was great."

Amani Ali, 18, was content with waiting for the short speech.

"Honestly I waited a long time, but like yeah it was short, but it was no big deal," Ali said, "I'm Hillary all the way. After this event, like yes! This makes me want to vote for her more. Absolutely. I'm totally voting for Hillary."

One fan was brought to tears by Demi's performance.
"I cried, I literally just balled my eyes out. I was so happy," Werts said.

With the caucus just 10 days away, the mixed reviews on Clinton's event in such a big town could impact her votes here in Iowa.

When asked for comment, an Iowa Clinton campaign spokesman said it had received information from 1,700 people at the Thursday night event that would be willing to caucus for Clinton.