A letter penned by a former Eagle Scout who returned his badge to the Boy Scouts of America (BSA) in an act of protest againstthe organization's decision to uphold its anti-gay policy is going viral in the blogosphere.

As Towleroad, Instinct magazine and other media outlets first reported, Martin Cizmar, who now works as the arts and culture editor of Oregon's Williamette Week, described the gesture as "kind of sad, but important" on Twitter.

In the letter, Cizmar -- who is straight -- writes: "Though I didn't know at the time, I was acquainted with a number of gay scouts and scouters. They were all great men, loyal to the scout oath and motto and helpful to the movement. There is no fair reason they should not be allowed to participate in scouting."

"A national policy on sexuality forces good, principled people from scouting," he continues. "I can only hope that someone inside the BSA has the courage to fix this policy before the organization withers into irrelevance."

Cizmar then concludes, "I don't want to be an Eagle Scout if a young man who is gay can't be one, too."

You can view the letter, which Cizmar posted to his Facebook page, in full below: 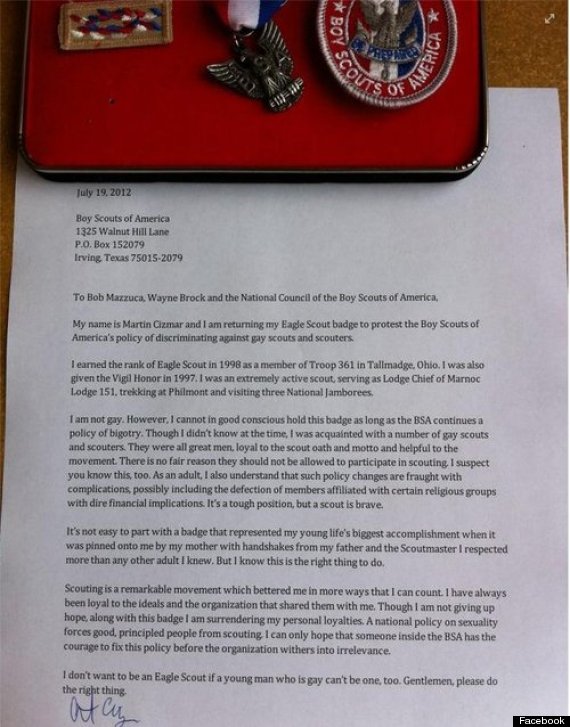 Cizmar, whose book "Chubster: A Hipster's Guide To Losing Weight" was released earlier this year, also explained his decision on Twitter:

Just mailed my Eagle Scout medal back to the BSA to protest the ban on gay scouts. Kinda sad, but important.

@mike_hipp I have faith it'll change someday, though who knows how long the BSA will do this and how much it will hurt the org.

@muellerjj Thanks man! Little gestures by lots of people can hopefully make a difference to the BSA bosses down in Texas.

A number of other high-profile voices have sounded off against Boy Scouts' longstanding policy excluding gays from participating both as scouts and as leaders. "Some may believe that by banning people who are openly gay, the organization is keeping out sexual predators," a Los Angeles Times editorial reads. "But repeated studies have shown how false this assertion is...the more likely reason is a pragmatic one: The Boy Scouts, unlike the Girl Scouts or international Scouting groups, derive considerable support from religious organizations that take a dim view of homosexuality, especially the Mormon and Roman Catholic churches."

Writes Brad Hirschfield in The Washington Post: "Ultimately, Boy Scouts of America is a private organization and they have the right to construct their membership rules as they see fit. They have the right to be wrong. But one hopes that they will not simply bask in that right, ignoring their own history in the process -- doing that, will simply reduce a truly wonderful organization to an ever-shrinking club which is increasingly relevant to itself only."