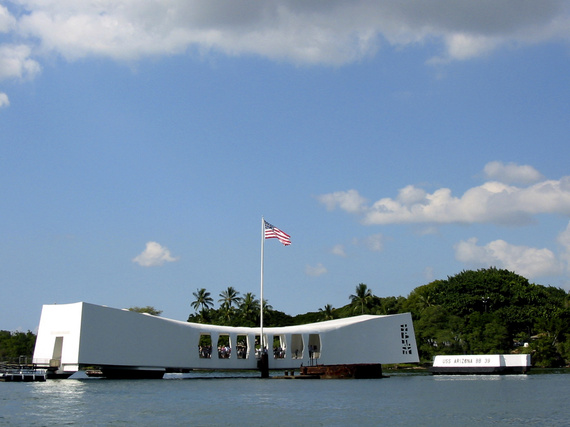 Some years ago, while leading a church group on a tour of Pearl Harbor, I stood among the clergy and their spouses in the gleaming white-arched and covered Memorial above the USS Arizona. One minister in our group, a man from Maine, had been there on December 7th, 1941 -- the day the Japanese flew in to sink our Pacific Naval Fleet. He had not been aboard the Arizona, but his ship had also been hit. He described vividly the horror of being aboard the flaming and sinking vessel as bullets flew and bombs roared. As I listened, out of the corner of my eye I noticed a Japanese tourist entering the Memorial.

It was the man's fine clothes -- long tie, buttoned sports jacket, and shiny brown lace-up shoes -- that initially attracted my attention. In Hawaii, professionals like lawyers, corporate executives, soldiers and ministers seldom, if ever, wear ties or jackets. Even network television news anchors wear open-collared aloha shirts. This man, dressed as he was, stood out.

Two women walked with him. The older one I took to be his wife, the other perhaps an older daughter. Both wore conservative dresses and fancy shoes. The man appeared to be in his sixties, and while he may have spoken English, I only heard him speak Japanese. In his left hand, he carried, almost shyly, an ornate and obviously costly multi-flowered wreath about eighteen inches across.

Our group's veteran continued to speak as we clustered around him. He described being caught below deck: feeling disoriented as the ship took on water where he stood, fire coming from above and the smoke stealing his breath. His buddy lay dead at his feet as the young sailor struggled in the darkness to escape, fear and adrenaline propelling him to the surface. Everyone in our group was so engrossed in his story, that no one, except for me, noticed the Japanese tourist and his family who walked quite near to us.

As I watched, the tourist stopped, turned to his wife and daughter and spoke to them. They stood quietly, almost solemnly. Then the man straightened his tie, first at the neck and then near the belt, and tugged at the hem of his jacket. As if in preparation, he squared his shoulders, took a deep breath, and then exhaled. Alone, he somberly stepped forward toward the railing at the water's edge above the sunken warship.

The other tourists swirled around him. From what I could see and hear, they were apparently all Americans. They were talking, laughing, looking, asking questions; some were listening to our minister's story, but none seemed aware of the tourist who had captured my attention.

I don't believe the Japanese man understood the minister's words. As I listened to one man and watched the other, the Japanese tourist came to the rail, bowed at the waist, and then stood erect. He began to speak; I heard his words but could not comprehend then. However from his tone and the look on his face, I felt their meaning. His manner conveyed so many things at once -- confession, sorrow, hurt, honor, dignity, remorse and benediction.

When he had finished his quiet prayer, he gravely dropped the flowered wreath into the seawater -- the same water the minister kept mentioning in his reminiscence -- and watched as the wreath floated away on the tide. The man struggled to remain formal, to keep face, but his tears betrayed him. I guessed he must have been a soldier, a warrior of the air, whose own plane had showered the bombs and bullets that had torn through our soldiers, sinking their ships. It struck me that he had come on a pilgrimage of repentance, not to our government, but to the gravesite of those young men whose lives he had taken in the name of war.

Stepping backward one pace, the Japanese veteran then closed his eyes and bowed again, very deeply, and very slowly from the waist. Then he stood tall, turned around and rejoined his family. His deed done, they began to leave. All the while, our minister veteran continued his narrative. He and the group were oblivious to the poignant counterpoint occurring behind them.

But I was not the only American to witness the Japanese man's actions. As I watched his family leave, I noticed another American step away from the wall on which he had been leaning. He was dressed casually, and wore a red windbreaker with the VFW emblem on it. He had a potbelly, thinning hair and held his hat in his hand. I assumed the man was a WW II veteran. 'Perhaps he had served in the Pacific,' I thought, 'and was himself on a pilgrimage.'

As the Japanese family walked by him, the American stepped directly into their path, blocking their way. I immediately tensed, fearing a confrontation. The startled Japanese tourist, who had been deep in thought, stopped short, surprise and sorrow mixed on his face. His family, eyes on the ground, stopped abruptly, then crowded closer around him.

But the American simply stood at attention, once again a strong, straight-backed soldier. Then he raised his right hand slowly and stiffly to his forehead, saluting his former enemy.

The American remained in salute until the Japanese, with dawning understanding, returned the gesture.

As the tourists milled by, the two men stood as if alone, joined by their shared pain, glories, honors and memories, until the American, while remaining at attention, slowly lowered his arm and formally stepped backward one pace. The Japanese tourist, when his arms were both once again at his side, bowed formally to the man in front of him. To my surprise, the American returned the honor.

Neither said a word. Neither had to. Their solemn faces wet with tears, expressed to each other in a universal language what could never have been said in words.

I watched as the two men, their reconciliation complete went their separate ways, united in a way I had never imagined possible.