In recent weeks, the ongoing weekly protests in the East Jerusalem neighborhood of Sheikh Jarrah have succeeded in making headlines both in Israel and abroad. Sheikh Jarrah is one of the most contentious neighborhoods in East Jerusalem, where Israeli settlers are gradually moving into the homes of Palestinian families, with the full backing of Israeli court decisions. In East Jerusalem, Jews can return to pre-1948 Jewish properties - but Arabs cannot return to pre-1948 Palestinian properties. This asymmetry creates not only great human suffering to the Palestinian families losing their homes, but also expresses unfathomable irresponsibility in the handling of a sensitive issue at the core of the Israeli-Palestinian conflict. Unilaterally creating facts on the ground while violating the human rights of Palestinian families is cruel, shortsighted, and reckless. 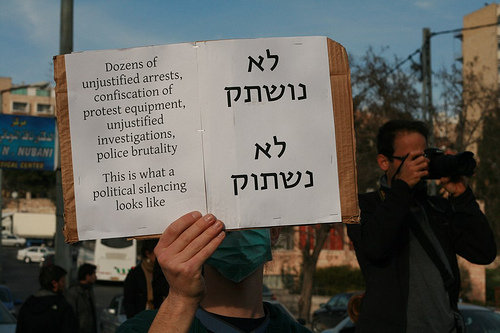 In recent months, dissenting Israelis have been staging growing, weekly protests at Sheikh Jarrah; these protests have resulted to date in more than 90 arrests of demonstrators by the Jerusalem police, who seems, for reasons known only to the police, to be making an orchestrated effort targeting this ongoing protest. Perhaps the most revealing quote suggesting an explanation for the police's actions is the following remark, made by a police prosecutor to human rights attorneys representing some of those arrested: "Jerusalem is not Bil'in and the Jerusalem police will not allow for Jerusalem to become Bil'in".

If the police are steadfast to "not allow" for Jerusalem to "become" Bil'in by preventing a peaceful weekly protest from taking place, then they have encountered a group of activists well aware of their free speech rights. The frequency of protest vigils is not a matter for police consideration. The measure of expressing dissent, outrage at what is happening in Sheikh Jarrah, and solidarity with the Palestinian families is prohibited by police. The case is clear: Israeli law states that protest vigils simply do not require a police permit. 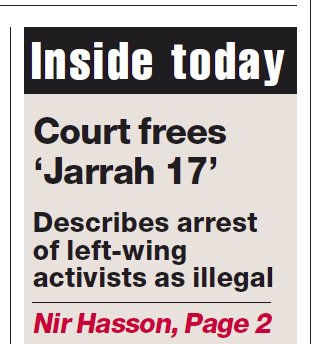 Following several weeks of arrests, a magistrate judge in Jerusalem finally ruled after a midnight hearing on Jan. 16 that the police had no legal basis to declare the protest illegal, nor did they have one for arresting any of the demonstrators. Because one of the 17 arrestedarrested and falsely detained for close to 36 hours happened to be the director of the Association for Civil Rights in Israel (ACRI) - that's me - the arrests received broader media attention.

The following week, on Jan. 22, the protest in Sheikh Jarrah was the largest to date, with several notables attending for the first time, including former minister of education Yossi Sarid, former Knesset Speaker Avraham (Avrum) Burg, Prof. Moshe Halbertal, and others. Below you will find a translation of the articulate interview on IDF radio with Burg, following his participation in the Sheikh Jarrah demonstration. (By the way, if you're looking for an opportunity to hear Burg and other great speakers on a variety of contemporary democracy issues in Israel, consider this forthcoming Jan. 31 New Israel Fund Town Hall meeting and webcast.

Alas, one magistrate judge's decision was not sufficient. The police again declared the protest illegal. ACRI's chief legal counsel Dan Yakir, Yesh Din legal counsel Michael Sfard, and other human rights attorneys were back in court. This morning (Jan. 28), a judge once again stated in the clearest of terms that the Sheikh Jarrah protests are legal, that freedom of assembly is a basic right which the police must protect, and that indeed no permit is required for the weekly vigils.

Following two consecutive court decisions in as many weeks in which the police's position was fully rejected, the police are now "studying" the situation.

The next protest in Sheikh Jarrah is scheduled to take place tomorrow, Friday Jan. 29 at 3pm Jerusalem time.

Executive director of the Association for Civil Rights in Israel (ACRI)