Former Presidential Candidate Savage Dragon announced today his intention to endorse the presumptive Democratic nominee, Barack Obama. Some of you may remember the Dragon's ill-fated 2004 run at the presidency in which he backed out when he discovered his running mate to be the evil Dreadknight, a supervillain with global domination on his mind.

Savage Dragon has come out to endorse the one major candidate he's sure isn't a supervillain, Barack Obama.

In a release sent out to the press, Savage Dragon creator Erik Larson said, "Fans have asked if he'll be running again, but given the importance of the upcoming election it seemed appropriate that he would back Barack Obama, the candidate whose politics most reflect his own. Savage Dragon will be giving Barack Obama his full support." 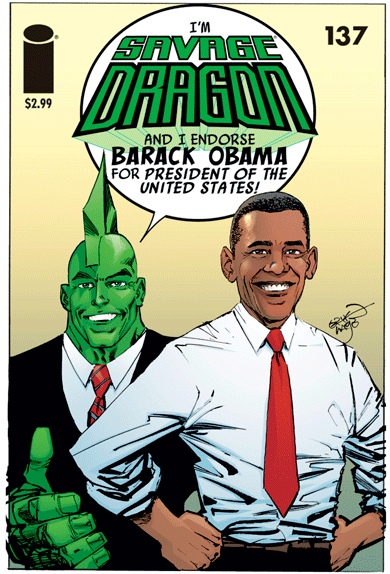 Issue #137 of Savage Dragon will be available for sale September 3rd at comic-book stores everywhere. One in five issues will have the above pictured Obama cover.

Aside from his failed presidential bid, this isn't the first time Savage Dragon has taken a swing in the political arena. Issue #119 (pictured below) featured the Dragon taking a swing at the 43rd President of the United States. Once again, another intriguing measure of the political landscape with the barometer of comic books. 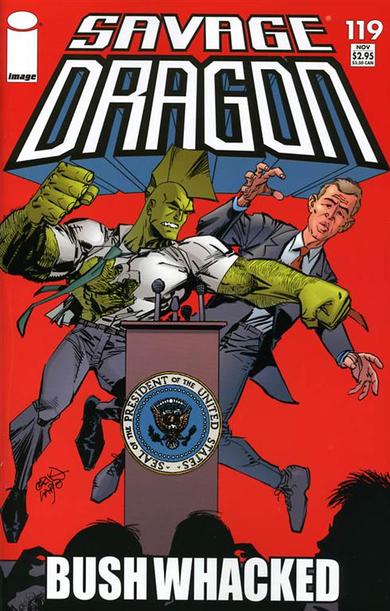 (Bryan Young is the producer of Killer at Large and writes about comic books at Big Shiny Robot!)