Do you ever feel like you don't know the "friends" you've amassed through your various social networking accounts? Wish there were an easier way to get to know them all? There's a simple solution: just ask.

What it is: Part social network, part question-and-answer service, Formspring is designed to bring web-savvy people closer together by providing a platform that allows for more intimate interactions than you might find in blog comments or Facebook wall posts.

When you go out for a cup of coffee with a new friend, you might ask questions about where she grew up or what her favorite season is, questions that will grant some insight into her personality. Though they seem to flow naturally in the real world, such questions can be hard to formulate online, according to Formspring CEO Ade Olonoh.

"We all want to share things about ourselves with people," Olonoh told The Huffington Post, "but sometimes it's hard to come up with something to say when you're looking at an empty box."

Questions are directed to a user's private inbox, where the user can pick and choose which questions to answer. Users can ask questions anonymously if they like, but Olonoh said that a username is stamped onto 80 percent of all Formspring questions.

When a user responds to a message from his inbox, both the question and answer appear on his public wall, where posts appear in a Twitter-like stream. Other users can visit his wall and read his responses to learn more about him.

A user's profile displays basic information (name, location, website) that might prompt queries from a visitor. Questions can be personal ("What was your first job?") or just for fun ("Jello or pudding?")--whatever engages users.

Why you'd use it: According to Olonoh, Formspring exists as a service apart from question-and-answer sites, such as Quora, where users tend to seek factual answers from practical questions. Instead, Formspring is more of a socialization network, where users come to get better acquainted.

"We don't really see ourselves in the Q&A space," Olonoh said. "Quora users, for example, are trying to get to the right answer. But Formspring is more personal. It's among friends."

Formspring's verified celebrity clientele, including comedienne Margaret Cho and singer Enrique Iglesias, have found the service to be an effective forum to connect with fans.

How to get it: Signing up for a Formspring account is as easy as visiting Formspring.me and creating a username and password. The site then asks if you'd like to connect your new account with any existing blog or social networking accounts. From there, you can start asking and answering questions.

Currently, the service is available only on the web. Though several third-party apps have made a stripped-down version available to mobile customers, Formspring hopes to launch a more robust app of its own later this year. 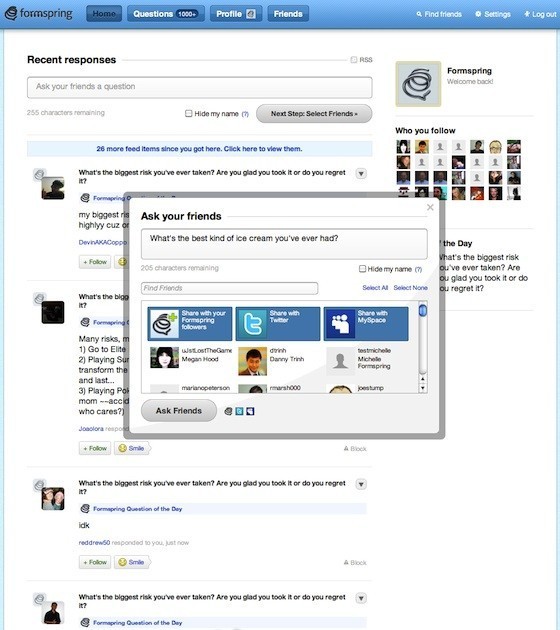