There was a time when gay and lesbian activists called themselves "homophiles," not "out and proud," and a time when they marched for liberation, not the right to marry. I never knew those days: I went to my first LGBT Pride march in 1990 at the precocious age of 17.

I lived in upstate New York, but would spend summers with my grandparents in New York City. Having spent two years scoping out the LGBT support group at the local Unitarian Church, haunting the Oscar Wilde Memorial Bookshop, and sneaking off to my local gay bar, the Maverick, I finally gathered my courage to go to the march. I'm sure I told my grandmother I was off to the library.

Somehow, I navigated my way to the south end of Central Park and was stunned by the size of the thing. Were there really these many gay and lesbian and transgender people in NYC? And if so, how many in the whole world? Every imaginable perspective was represented: "Allied Buddhists for Gay Rights" to "Gay Men of African Descent," "Gay and Lesbian Independent Democrats" to "Sirens Motorcycle Club," "Lesbian & Gay Big Apple Corps Marching Band" to "ACT UP New York." It inspired me that the gay life I was embarking on could be whatever I chose to make of it. I didn't realize that the march wasn't much older than I was.

This year we are celebrating the 40th anniversary of the march, first held in 1970 to commemorate the anniversary of the Stonewall Riots. However, its origin reaches back to 1965, when the East Coast Homophile Organization (ECHO), spearheaded by the Mattachine Society and Daughters of Bilitis, began holding annual Reminder Marches for gay rights in Philadelphia on the Fourth of July.

ECHO moved the 1970 march to New York City for the last weekend in June. Craig Rodwell--activist and owner of the Oscar Wilde Memorial Bookshop--was the major force behind the move.

The new march was named the Christopher Street Liberation Day March to shift attention from the Mafia-controlled Stonewall and onto the gay and lesbian struggle for liberation happening in the streets. Despite widespread fear of police obstruction and public violence, the march went on, traveling uptown on Sixth Avenue from Greenwich Village to Central Park for the "Gay Be-In."

All of the New York City gay and lesbian groups participated--both the new generation and established veterans--as well as visitors, and the march attracted national media attention. A sister march was held in Los Angeles and others soon followed around the world.

The new march dwarfed the Reminder marches in sheer size and had a completely different tone, drawn from America's youth culture and showcasing a wide array of lives and perspectives. Over the years the route changed, to down Fifth Avenue to Greenwich Village, and the march has grown into an ever-larger mirror of LGBT communities and conflicts.

That energy, diversity, and grassroots political spirit will have me on the streets again this Sunday, but with no excuses for my grandmother.

More on Gay Pride in the NYPL Digital Gallery 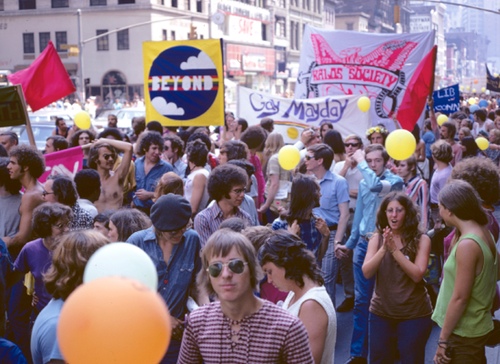