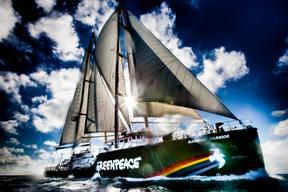 After forty-five years, countless campaigns and stories - one thing remains central to the Greenpeace identity, and that is people. People are at the heart of who we are and what is needed to create the green and peaceful world we need.

Greenpeace began with a handful of men and women in the port city of Vancouver on Canada's Pacific coast who volunteered their time, energy and creative skills and courageously took on something greater than themselves. This small group worked together to protest a planned nuclear test on Amchitka Island off the Alaskan coast.

After raising funds and securing a boat, known as the Phyllis Cormack, which was re-christened the Greenpeace, the small group of activists set sail on their voyage. Unfortunately, the US authorities intercepted the boat and the crew returned home.

Though a simplified version of the story, that was the beginning of a much bigger journey. The tenacious efforts of that small group of activists who set sail in the face of great adversity helped to raise public awareness, and opposition against nuclear testing grew.

What their story demonstrated is that small groups of people can bring communities together, in ways they never thought possible, toward a common goal. This type of collaboration can reveal people's similarities, which, in this case, were their collective concern for our environment.

Since that day in 1971, the Greenpeace network has had many victories and losses. Today, on our forty-fifth anniversary, we celebrate those victories even as we continue to learn from our losses.

We want to acknowledge and thank all the people who were involved from the very beginning; those who have spent nearly a lifetime working tirelessly to protect our planet.

Without the activists and cyber-activists, ships crews and campaigners, volunteers, scientists, lawyers, political lobbyists and researchers, Greenpeace is just a word. Greenpeace is made up of people driven by the same idea. It is our supporters, donors and allies.

Greenpeace is the more than 36,000 active volunteers strong, across the globe who share their skills, energy and time to organise in their local communities - all these people are Greenpeace.

We celebrate these people who are a positive force of nature because we face significant environmental issues that threaten to radically alter the planet and all the life that call it home. The hope that we can collectively change the course we are on is unflinching and necessary.

Climate change is arguably the biggest global issue of our time. The Paris Agreement is a major step to bring into force and drive far more ambitious international action to hold us at 1.5C and move us toward 100% renewables and safe, secure energy for all. Greenpeace is working to shift the world away from a fossil fuel-based economy, to one built on clean and renewable energy, in ways that bring local benefits to people. To do that we need to shift the power away from the fossil fuel industries.

Progress, made together with communities and groups, to keep our old growth forests and tropical rainforests standing is critical. This work both supports the unique biodiversity found only in these great forests and helps protect our climate because of the role forests play in balancing our global environmental systems.

Greenpeace is campaigning for growing our food in ways that are good for the planet and people, including farming that helps cope with climate change. And we are working toward a toxic-free future where dangerous chemicals are no longer produced, used and released into our environment.

Today, we continue to fight vigorously against nuclear power, and although full-scale nuclear testing has slowed thanks to the people who stood up against it, nuclear-armed states continue to possess, develop and modernise nuclear weapons. We need a UN treaty to ban nuclear weapons.

The health of the planet depends on the health of all of its parts. These interconnected issues are complex and the solutions may sometimes feel far out of reach. Today, as it did those forty-five years ago in Vancouver, it will take people to give voice to our environmental issues and take action toward solutions.

Martin Luther King, Jr said: "Human progress is neither automatic nor inevitable... Every step toward the goal of justice requires sacrifice, suffering, and struggle; the tireless exertions and passionate concern of dedicated individuals."

Today, there is a greater urgency to protect our communities and our planet. People power is needed now more than ever. People taking non-violent direct action, bearing witness, exposing environmental crimes, investigating and highlighting environmental issues and driving the solutions.

More and more people believe and are willing to dream big so that our green and peaceful world can be realised.

"Another world is not only possible, she is on her way. On a quiet day, I can hear her breathing." - Arundhati Roy