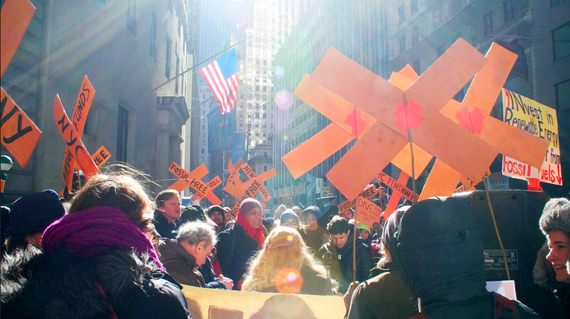 An anti-Environmental Protection Agency zealot will be the next head of the EPA; President-elect Donald Trump has promised to abrogate the Paris climate accord; and temperatures in the Arctic last week were as much as 35 degrees above normal, as polar ice stubbornly refused to refreeze.

So maybe you'd like a little good news on the environmental front? The fossil fuel divestment campaign -- which turns four years old this month -- has been almost bizarrely successful. And as other avenues for change start to get closed off by the Trump administration, divestment is likely to become an even more crucial part of the fight for a livable planet.

In 2012, divestment was just an idea. A small report by a small London think tank had uncovered a very big truth: the world's coal, oil and gas companies had four or five times as much carbon in their reserves than we could burn if we hoped to stay below the temperature targets the world's governments had pledged to respect. That is: if these companies carried out their business plans, the planet would tank.

When activist and author Naomi Klein and I read that report from the Carbon Tracker Initiative, it struck us that it no longer made sense to think of these companies as just normal enterprises. Like the companies that funded apartheid South Africa a generation ago, they were engaged in something so dangerous that no one should partner with them. And so 350.org, the environmental organization I co-founded, and then a host of other groups, began calling on institutions to sell their holdings in these firms.

The effort began on a handful of American college campuses. This week, the global Divest-Invest network announced that portfolios and endowments with assets reaching $5 trillion have committed to divest those assets from coal, gas and oil. The announcement comes simultaneously from London, New York, Tokyo, Cape Town and Sydney, and it includes news of some of the most recent high-profile divestments.

Just last week, the American Museum of Natural History, the largest and oldest museum in the country, decided it made no sense to chronicle the natural world and also invest in its demise, slashing fossil fuel investments from its $650 million portfolio.

Even bigger developments are on the horizon. The Divest New York coalition, for instance, will turn out folks on Thursday when the city's pension fund meets. Three years after Superstorm Sandy, the Empire State is still putting its money in companies like Exxon, even as Attorney General Eric Schneiderman's investigations make clear that the company misled both the general public and investors about its knowledge of global warming.

Withdrawing that $5 trillion from the industry has had real effects: when Peabody Coal announced its bankruptcy last year, it cited the divestment campaign as one of the reasons.

But the even bigger effect has been to spread the new math about climate change. When we began, only a few people on the planet really understood this horrifying new math. "It was incomprehensible" to most investment analysts that we'd have to leave fossil fuels in the ground, says Mark Campanale, the head of the Carbon Tracker Initiative and the man who was the first to add up the numbers. By now, though, the thousands of campaigns at colleges, churches, foundations, museums and even zoos have made sure that all the powerful people who sit on their boards are now well acquainted with the problem.

The math has worked its way to the very top: everyone from the World Bank to Deutsche Bank now talks about the need to leave oil in the soil and coal in the hole. Mark Carney, the governor of the Bank of England, told the world's insurers not long ago that the two-degree target agreed at Paris "would render the vast majority of reserves 'stranded' -- oil, gas and coal that will be literally unburnable."

The Trump administration, of course, disagrees -- he and his colleagues have made it clear that they want to ramp up fossil fuel production. And at least for a while, given the GOP's grip on power, the Exxons of the world will be getting their way in Washington. This makes it all the more important that everyone who cares about the planet's future focuses on more malleable targets: investors and our institutions. With anticipated regression at the federal level, it's more critical than ever that our institutions at the city and state level step up.

It's actually a pretty easy sell. Endowments that divested early on have made out like bandits, avoiding the collapse of the coal industry and the long slide of oil and gas stocks. And those institutions are no longer as implicated in the horror of climate change -- they're not bankrolling the corporate lobbying that is polluting the politics of Washington and other capitals. Five trillion dollars is a pretty good birthday present, but divestment is still a young effort, with plenty of room to grow.