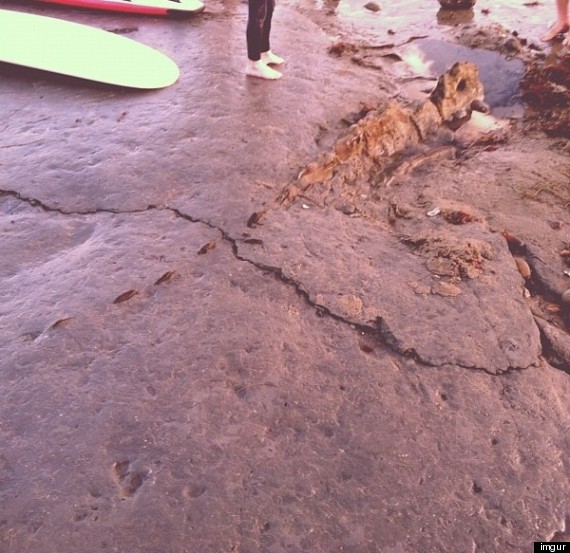 Some surfers made an amazing discovery near Santa Cruz, Calif., yesterday, when they found what looked to be a fossilized row of vertebrae jutting out of some rocks during an "extremely low tide."

One surfer, Reddit user "Donkahones," snapped a picture of the old bones and uploaded it to the social news site with the light-hearted headline, "So I went surfing and saw a dinosaur." Not everyone appreciated the joke, but it did attract quite a bit of interest.

The Huffington Post reached out to the Institute of Marine Sciences at the University of California, Santa Cruz for comment. Director Gary Griggs wrote back and said that the fossils in the photo were most likely from an extinct Pliocene-era whale.

"The rocks exposed along the coastline here near Pleasure Point are marine sedimentary rocks of the Pliocene Purisima Formation, about 3-5 million years old," Griggs wrote. "They... formed in a shallow marine environment and contain lenses of mollusc shells... as well as numerous marine mammal fossils."

Believe it or not, this isn't the first time fossils of ancient whales have been found in the area. In 2009, a 44-inch fossilized vertebrae of an ancient whale was unearthed during the construction of the Pleasure Point seawall, according to the Santa Cruz Sentinel.

That fossil was displayed in the the county Board of Supervisors' chambers in 2010.

Earlier in November, a large ammonite shell fossil measuring about 3 feet in diameter was found in the woods near Mount Benson, British Columbia, the Vancouver Sun reported.

Unbelieveable But True Images From Ripley&#039;s