Canela the pit bull was found as a stray, then wound up at a San Francisco-area shelter with a gigantic, raw-looking, inoperable tumor on his rear, earlier this year.

He was neutered and microchipped, and seemed well-socialized, but attempts to find the dog's owners went nowhere.

Canela was going to be euthanized at the shelter, because he was so uncomfortable and not much else could be done.

Two doctors -- Maria Steelman and Maria Rivero -- had another idea.

They decided to give this dying dog a comfortable, love-filled home for however many days, or weeks, he had left.

And they'd like more dogs like Canela to get the same, through a foster hospice program called the Rainbow Bridge Fund.

"We have a feeling there will be many who will need to live out their remaining days with special, committed fosters who believe in end of life care," says Steelman. "These animals knew love at one time, and something went very wrong. It is hard to face the death of a companion animal, but by far it is much harder to think of that animal alone and scared as it leaves this earth."

Meanwhile, beautiful Canela with the big tumor is still living it up in fospice with Dr. Maria R.!!!

Steelman, a pediatrician for her day job, is founder of PALS East Bay, the rescue group that the Rainbow Bridge Fund is a part of.

The Rainbow Bridge is where pets are said to go after they die, and where their bodies are again whole. But before they get there, for homeless pets, options can be limited.

This program pays for medical expenses -- at least in theory; Steelman says the half-dozen families who have taken in Rainbow Bridge Fund dogs so far have insisted on covering vet bills themselves -- with the aim of giving homeless animals a foster hospice home, during their last days.

"Once a diagnosis is made, and it is bad, a dog can still find peace and comfort in a home," says Steelman. "Dogs don’t have a great sense of time, so a week of love in a home can make up for a lot of past sadness."

Rivero, a semi-retired geriatric doctor, took Canela to her home through that group, in March.

Rivero didn't know Canela's background or how long he'd have, at the time. She'd seen the 8-year-old doggie's photo on the PALS East Bay's Facebook page, and says she just "wanted to do something that would be of service to shelter dogs."

"He was obviously a loved companion in his prior life," says Rivero. "He deserves to have the best possible quality of life and lots of love in this final transition and to die at home in the presence of his family."

Rivero and her partner Derek Kerr, a retired hospice doctor, brought in a massage therapist for Canela. They gave him a couch, where he could watch the goings-on inside, and when it was nice out he preferred to sit in the sun on the deck. He liked to go for walks, and had three hairless tiny pooches to keep him company.

Canela got medical marijuana to stimulate his appetite. Turns out he has a special fondness, Rivero says, for "scrambled eggs and soft cookie dog treats."

For more than a month -- more time than they thought they might have together, at first -- Canela was spoiled. He didn't have much energy, due to his illness, but he gave lots of love in return. Canela showed himself to be charming and sweet, even while the cancer took over his body.

And, yes, Rivero says, it is hard to love an animal who doesn't have long left. But worth it.

"The end of life is an important transition for all beings. Dogs are loyal companions to their human families. They deserve to have better quality of life in their final days then a shelter can provide," she says.

"We are doing what we would want done for our dogs," says Steelman. "These are old geezers, for the most part, and since we are all going where they are going it feels good to lend them a hand."

A couple of days ago, the vet came to Rivero's house for a final visit with Canela.

"He was ready. He had flowers from the garden he loved all around him. We miss him so much. He was a truly remarkable being," Rivero wrote in a moving Facebook post about Canela's end.

Rivero tells HuffPost that Canela was giving kisses, and taking walks, and "eating treats and getting lots of attention" right until his last moments.

"He also intuitively knew how to live while dying. Enjoying every day to the fullest," she says, before dying "peacefully at home, surrounded by loved ones and flowers from the garden he loved."

Losing this dog -- whom Rivero calls her "son" -- is acutely painful. But even now, just a few days after he's died, Rivero says she has no regrets. Because Canela's story might inspire others to give other dying shelter pets their own gentle, loving end.

"Canela taught us that death and dying are an important and valuable part of life. He participated and contributed as a valued member of our family until the very end," Rivero says. "We are so grateful for the time we had." 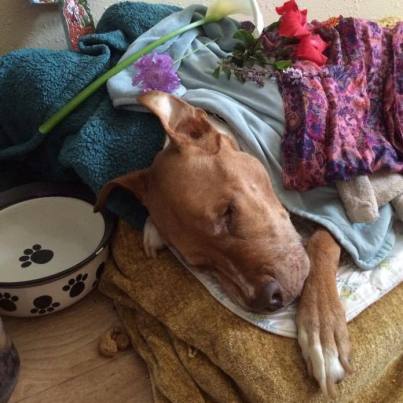 Canela's last day at home, on May 2. Photo: Maria Rivero

Find out more about PALS East Bay's work on the group's Facebook page. There you can also find out information about more Rainbow Bridge Fund dogs who need foster hospice homes.