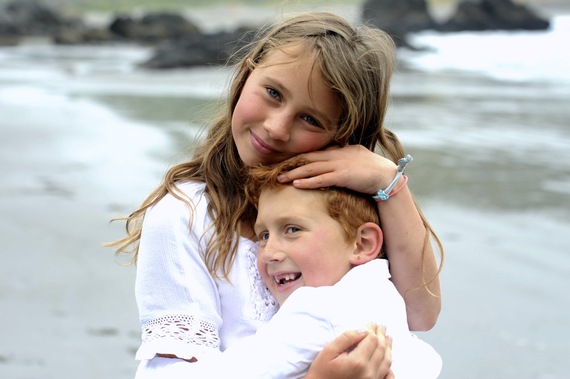 "What I notice, continuously, is that in spite of their frequent behavior to the contrary, children naturally want to be in rapport with peace! They truly WANT to learn how to embody their best selves. They are begging us to show them the way."

I have felt deeply moved and heartened lately to witness an essential and growing shift in my children's sibling relationship.

Of course, like all relationships, it's an ongoing work in progress. But I had a breakthrough recently in relation to a specific way I was engaging with a challenging dynamic of self-centered stinginess between my children, and the fruits of this breakthrough, "fostering generosity", have been utterly inspiring and faith-instilling for me about what's possible.

For the most part as a parent I trust the organic developmental process I get to witness in my children. There is a natural time and place and phase for all aspects of consciousness, and I celebrate my children being the young humans that they are. I don't need or expect them to have outgrown the natural egoic thrust of "me" and "mine" no matter how annoying it might be to navigate with them at times!

And yet some of the less pleasant aspects of young egos, the narcissistic and myopic tendencies that show up in most young ones -- this sense of the world revolving around them and their insistent desires -- is also what we consciously get to work with as parents.

Tendencies of selfishness, hoarding and greed, competitive comparison, malicious teasing, ill-wishing and bullying are all unfortunately common in childhood; and as we know, some humans fail to grow out of these tendencies! And so I see it as a great responsibility and honor we have to socialize and condition our children in ways that help them to understand their place in relation to one another and the greater whole, to take responsibility for the energetic impact of their presence in a space; illuminating the conscious choices they can make regarding both the beauty and harm they might bring to an environment.

One relational pattern between my children that had begun to truly drive me CRAZY, was the way in which my children were relating to one another's distinct callings and passions with an air of mutual competition, disdain and aversion. Arayla, (10.5) had grown resentful of her brother's exuberant passion for skateboarding, not wanting to have to give her own precious time towards supporting his development of skills and sport. Likewise, Ezra (6.5) was irritated and full of complaint when it came time to bringing Arayla to her horseback riding lessions, a practice and passion that brings her such deep peace and grounded joy.

I had tried objecting to this, reflecting how irritating it was to presence their unkind complaints, basically giving them negative feedback for the behavior. I had also tried ignoring it, refusing to fuel the dynamic with my own engagement. But much to my dismay, the pattern continued, and strengthened in intensity, leading to pseudo-tantrums when one was expected to accompany the other to their practice or lesson.

One day, I came home from a peaceful weekend of solitude away, and the toxicity of this dynamic was so painful for me to witness, that in a moment of absolute desperation I called a family meeting.

In the meeting, I let them know how much my heart was hurting to feel them not supporting each other in this way. And then we talked about what it means to REALLY love one another; what we sacrifice or give up of ourselves in this true love for another. I showed them how one of the greatest ways we can show our love for another being is in supporting their passions. And that this is a true expression of generosity; to give up our own space, time and attention in service of someone we love nurturing their own gifts, skills and passions.

To my surprise, my children listened with rapt attention, without a single defensive comment or objection. I think they could really feel how sad this dynamic made me feel, and this weighed heavy on their sensitive hearts. They were quiet, and nodded in sober agreement. It was as though they had been waiting for my invitation, and were relieved to be offered an alternative to the poisonous dynamic they had been engaging in somewhat addictively.

The next time we went to the skatepark so Ezra could skate, I gently invited Arayla to join me in witnessing the way Ezra was being served by his practice. "Look at how he's getting his energy out; how much he loves to challenge himself! Wow, look at the ease with which he finds his beautiful center." She was quiet by my side, and softened to invoke a different perspective regarding her brother's joy. I could feel the real stretch it was for her, after so many months of harboring resentment, to be authentically happy for his happiness, and I could also feel how much she appreciated the opportunity to stretch in this way. She leaned in by my side, palpably committed to evolving her stance. After many minutes, she looked up at me and said, tenderly: "Thanks for helping me to love Ezra better, Mom." Oh my goodness, such sweetness!

When we took Arayla to her horseback riding lesson not long after, I engaged Ezra in a similar way: "Wow -- look how much your sister loves to ride that horse! How beautiful she is! Tell me what you see in her?" Ezra watched carefully, and then said, astutely: "It's like how I feel when I'm skating, she just feels so happy, so strong and powerful and alive." My heart burst open, and I said "Yes! That's it! Knowing how much you love to skate, can you be happy for your sister that she gets to ride?" He nodded, his eyes shining, and he said: "I'm glad Arayla gets to have her passion."

Ahhh... you can imagine the relief for this mama heart!

I decided to try this new strategy out around another irritating pattern between them. This one, somewhat horrifically humorous, (maybe other parents can relate?) arose whenever one of them was thirsty, especially in the car, and we only had one water bottle from which to share. Invariably, when one of them would ask for a drink, the other sibling would suddenly be alerted to their own immense, seemingly life-threatening thirst, and while the other sibling drank, there would be loud demanding pleas from the other: "God, don't drink it all! Leave me some! You're gulping!" Or, my personal favorite: "You're only thinking about yourself!!"

This had happened so many times it was becoming ridiculous, and again, though I had objected many times to the pattern, insisting they stop squabbling, assuring them we have plenty of water, etc...the pattern continued, and I became more and more sensitive to its toxicity.

Finally, I realized that what really bothered me about this pattern was not just the irritating sound of their bickering, it was how apparently self-centered they each were in relation to their own thirst, not caring for one another's needs. And so in a calm moment, wherein unimaginable thirst was not such an immediate experience, I challenged them to a new perspective.

I said: "What would it feel like if you cared for each other's thirst being quenched, or hunger being sated, as much, if not more, than your own? What does that feel like in your hearts?" They were quiet, contemplating. Then Ezra said: "Loving." And Arayla said: "Generous." And I sighed deeply with gratitude and said: "Yes, thank you."

And then I added, with utter seriousness: "Here, at this time in our lives, we are some of the most blessed on the planet. We have enough food, and enough water to drink. There are many in our world who are not so lucky."

And then I asked them to carefully consider: "If we really did not have enough to eat or drink, would we want to eat and drink all that we could, only thinking about ourselves, without concern for what each other might need? Or would we want to share with our loved ones whatever we have...?"

I saw them really take this in, this scary thought of not having enough, and imagining their sibling whom they love dearly not having enough. Their eyes got big, and they looked at one another tenderly.

In the days that followed I noted a prominent shift around this issue. I overheard them offering each other a drink first in the car, before drinking themselves! I noticed them offering to get each other water at meal time, and considering one another when they went to fetch themselves a snack.

It continues to do such immense good for my heart, and there is notably more peace in our home. How faith-instilling, right? These small steps we can take and ways we can move beyond self-concern; learning to remember to simply and generously consider one another.

What I notice, continuously, is that in spite of their frequent behavior to the contrary, children naturally want to be in rapport with peace! They truly WANT to learn how to embody their best selves. They are begging us to show them the way. I think we do children a great disservice when we assume they are too immature or egocentric to not only understand but actually embody empathetic, compassionate, insightful and generously wise perspectives.

Why not instead assume they are entirely capable of embodying qualities that help them to feel the largeness of their own hearts, and the immediacy of their power to bless and inspire those around them with the choices they make?

I love, respect and in no way take lightly this humbling capacity we have to condition our children. For better and sometimes for worse, the children of the world are watching our every move and learning from our living example.

Hopefully we condition them in ways without shaming, blaming, guilting, or hobbling their strong-willed spirits, while serving their potential as humans to know deep love and respect for both themselves and each other; humans who passionately contribute to the world, who communicate clearly and skillfully, and who harbor well-honed gifts of self-reflection and self-awareness.

For myself, this breakthrough of bringing my genuine sadness to my children about hurtful tendencies I notice between them, and powerfully inviting them to embody, enact and extend authentic generosity to one another and the world around them, is one I will continue to learn from!

Such an endlessly humbling path true parenting is; such an immense responsibility, holy task and sacred honor.

Jesua serves the awakening and embodiment of love and truth in her roles as a writer, healer and mother.