Ivy Baldwin is a collector of steps. I imagine her gathering them the way a wine enthusiast amasses bottles, with an eye for quality and taste, storing them in the cool cellar of her mind to be retrieved and savored later. She finds them in other dances (the flattened, architectural poses of Vaslav Nijinsky's Afternoon of a Faun) and in the everyday (a purposeful fluttering of the hands, as if shaking off dishwater). She is a curator as much as a creator. 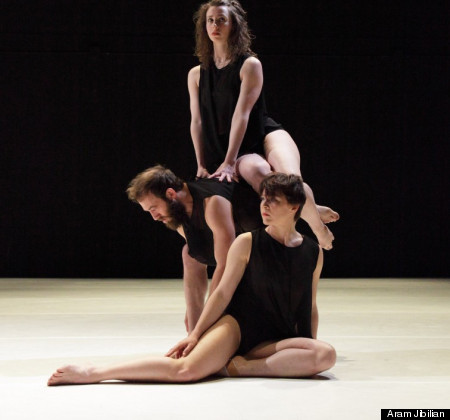 But what does a dance of found objects add up to? Ambient Cowboy, which Ivy Baldwin Dance performed last week at New York Live Arts, was apparently inspired by a visit to Philip Johnson's Glass House, which places only the most (literally) transparent of boundaries between civilization and wilderness. It sounds like a good animus for dance, prompting explorations of contrast: modern and ancient, manmade and natural, bounded and unbounded. Yet Cowboy, like most of Baldwin's dances, doesn't probe or examine; it just presents. There's not enough logic connecting the beautiful objects in her curio to each other, or to any larger idea.

And that curio is stuffed so full that everything in it begins, inevitably, to blur together. After a while, you stop trying to figure out whether the rapid, Lamaze-style breathing Lawrence Cassella does at the beginning of the piece is related to the whooshing noises he and Baldwin make later on, whether the repeated flamingo-like balances are meant to mean something, why Baldwin might be grooming Cassella's head.

There are a few lovely moments in Cowboy when Baldwin, with her keen eye, captures something ordinary in a way that's so right it becomes extraordinary. In the solo that closes the work, Molly Poerstel-Taylor falls to the floor and appears to sleep. Rather than lie still, she makes the small, unconscious adjustments of a slumbering child, repositioning an arm slightly, nuzzling her head against an imaginary pillow. Baldwin has said that she's "interested in choreography that is abstract yet conjures a powerful emotional response in the viewer," and heart-catching moments like these bring her closest to that goal.

Baldwin can make us feel. But Anna Schuleit's set design is the only part of Cowboy that really makes us think. It's not a set in the traditional sense: It's a series of projections, ribbons of light that crawl, Etch-a-Sketch style, around the floor, the walls, the dancers, creating imaginary boundaries that disappear with the flick of a switch. At one point Eleanor Smith, lying face-down on the floor, is covered by a thick web of these light doodles, immobilized by them, until -- ping! -- they vanish. Like walls of glass, they're both there and not there, real and unreal.

A former dancer and choreographer, Margaret Fuhrer is an associate editor at Dance Spirit and Pointe magazines.