You almost have to be lost to find it. And even then, if you don't know in your bones what you're looking at, you might not realize what you've found.

The first time I saw the place, half a dozen years ago, it was hidden by scrub pines. I caught a glimpse of it out of the corner of my eye as I raced along Route 6 in the northern tier of Pennsylvania, a few miles outside of Nowhere, two miles or so west of East Nowhere.

It was on the verge of collapse. The broad flat roof was failing. Decades worth of water running off the mountainside had buried parts of it in debris and threatened to wash away the rest.

But if you looked hard, and if you knew what you were looking at, you could still make out those distinctive lines carved out of stone and arranged in meticulous order so they that hugged the landscape and complemented it. The windows that seemed to defy logic still floated at the corners of the stone building. The brooding, earthy tones still exuded the unmistakable sense that clung like moss to the perfectly symmetrical stones that someone, a long time ago, had a vision of a future. And he had the skill to hew a place in it out of the native rock.

It was called Lynn Hall, and once upon a time, say the locals around Smethport and Port Allegany in the remote north-central reaches of Pennsylvania who are old enough to remember, it was glorious. A place where young women and men, dressed to the nines, would dance the night away to big bands, and wander onto the balcony to watch the moon rise over the valley. But there was more to it than that, say historians and archivists who study such things. It was also significant. It was here, in this rocky nowhere, that Walter Hall, the man once described as the "hillbilly builder" who turned Frank Lloyd Wright's wild vision of Fallingwater into hard stone and steel, first put into practice some of the arts that molded that most iconic of American buildings, and was in turn molded by it. 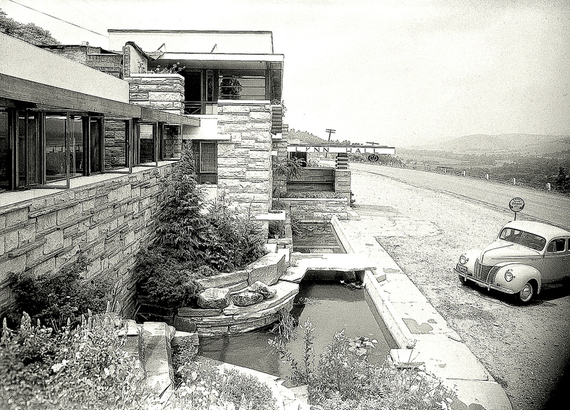 There is no question that Hall, a self-taught builder and a backwoods visionary, shared Wright's passions in many respects. A country boy who had been raised on a farm not far from Lynn Hall and a self-taught stonemason and builder, he was a man possessed by an overwhelmingly optimistic sense of the future. He was a pilot, as were his son and grandson, and imagined a world where technology was king and organic architecture was Camelot. His early sketches for Lynn Hall include a gleaming Flash Gordon futuristic tower, the sort of thing that looms above the modernist airports of the era, though the flinty, practical side of him later abandoned that flourish. And yet, according to those who knew him, he was still very much the poor-boy pragmatist, using what he had, be it local stone or the detritus of a dilapidated old barn, as the raw material for his vision. Everything he did at Lynn Hall, he did on the cheap, reusing, repurposing, reimagining every piece of wood, every hunk of stone, turning another man's junk into his treasure.

Nor is there any doubt that he was deeply influenced by Wright's work. He talked often about trips he had taken to visit Wright's buildings, notably in Buffalo, one of his young apprentices told me years ago. "From the very start, when I went to work with him, he talked about Frank Lloyd Wright," the then 93-year-old Rudy Anderson told me. At the time, "the name meant nothing to me," Anderson said, not long before he died.

It soon would mean something to Anderson. By 1935, after toiling for a few years on Lynn Hall - carving a waterfall out of rough stone and guiding it through the building to a pool that ran along the front façade for example, Hall put the building on hold and took the job as the builder for Wright's project at Bear Run. Anderson joined him.

It was not an easy job. Whether the famously flamboyant Wright recognized it or not, his design for Fallingwater left a great deal of room for improvisation, and improvise Hall did, with abandon, often to Wright's consternation. Hall would add reinforcement to concrete where he felt Wright had overlooked them. He would ignore those details Wright had included that he felt were extraneous and make up details where he thought Wright have overlooked them. It was Hall, his grandson later told me, who made the decision to ignore Wright's instructions to remove a boulder right beside the spot where the massive fireplace was supposed to be built in Fallingwater's great room, a detail that has since become almost emblematic of the organic movement in architecture.

In each case Hall drew on his backwoods sensibility, I've been told. But as work progressed, the exchanges became increasingly brittle. In one letter, for example, Hall informed Wright that he had just poured the concrete piers for the great room, and then added sarcastically, "I put them where I thought they ought to be on account of there's no dimensions on your drawings."

Their increasingly strained relationship is evidenced in a single photograph that Hall's grandson kept as a treasured memento. It shows Hall standing at Fallingwater, a tattered blanket tossed over his shoulder, a handkerchief tied at four corners and placed jauntily on his head, mocking Wright's proclivity for capes and berets.

And yet, the job got done. And when it was finished, the builder returned to his work at Lynn Hall.

There is no question that Hall had made a profound contribution to Fallingwater and to American architecture. As Franklin Toker, the University of Pittsburgh professor and author of "Fallingwater Rising" once told me, several of the most distinctive elements of Fallingwater may have come from Hall and from his work on his own building. The use of radiant heat throughout the structure, then considered revolutionary, "is probably something Wright picked up from Walter J. Hall," he told me. The 40-foot long reinforced concrete beam that Hall used at Lynn Hall is central to Fallingwater, he told me. "The characteristic stone of Fallingwater, which Wright had exactly used in that manner, might be a contribution of Walter J. Hall."

"That Walter J. Hall was influenced by Wright is 100 percent clear. But he certainly did make contributions to Fallingwater."

And yet, as Fallingwater became ever more famous, further burnishing Wright's legacy, Hall, and what he called his "joint" in the middle of nowhere were forgotten.

Maybe it was that the future Hall imagined wasn't what he imagined it to be, or that it somehow got corrupted as the years passed and something else replaced his soaring visions. Whatever the reason, places like Lynn Hall got shouldered out by fast food restaurants and chain motels and tract mansions, one exactly the same as the next.

Little by little, the woods and the elements began reclaiming Lynn Hall.

And then, one day, about 18 months ago, that changed. A guy by the name of Gary DeVore, a retiree from the Midwest, the son of a stonemason, a guy who had always dreamed of being an architect, but who, he claims, "didn't have the eye," stumbled across the place. He knew in his bones what it was that he was looking at.

It wasn't easy to pry the place out of the hands of the few remaining descendants of Walter J. Hall. They always imagined that someday they would restore the place, they told me. But that never happened because there was never enough time or enough money. Most importantly, perhaps, it was the fact that the ethos of the place, that ability not just to see what the future could be, but to have the peculiarly backwoods American skills to use the stuff you have just lying around to build that future, died in 1953 with Walter J. Hall.

Or so they thought. As it turns out, a hint of that ethos is still alive in DeVore. You can see it in the way his eyes sparkle when he stands in the ballroom and points up at the ceiling, where, after peeling away the detritus of decades of neglect, he came across an old piece of wood, weathered and beaten, that was used to make up part of the roof of the building. "Do you know what that is?" he asks me. "It's the door from his father's old barn." Sure enough, the hand-wrought iron hinges are still in place.

To DeVore, who is busily rebuilding the place using the same seat-of-the-pants techniques that Hall used to build it in the first place, that barn door represents the genius that went into the construction of Lynn Hall. It's the reason that the place deserves to be recognized, not just as a possible progenitor of parts of Fallingwater, but celebrated in its own right. Because now, at a time in America when maybe our faith in the future is fading, in no small part because we've lost touch with that part of ourselves, we need to learn again how to hew grandeur out of what we've left behind.

"To me, it's a legacy about the survival of design," DeVore told me. "This building is pure, classic organic architecture, but it's also about...simplicity. It's recycling, it's repurposing, it's about all the stuff that we're discovering today."

All of that and more, he said, is carved into the stone and notched into the old timbers of Lynn Hall. The thing is, you almost have to be lost to find it.

Seamus is the author of "Betting the Farm on a Drought; Stories from the Front Line of Climate Change" (University of Texas Press, April 2015)