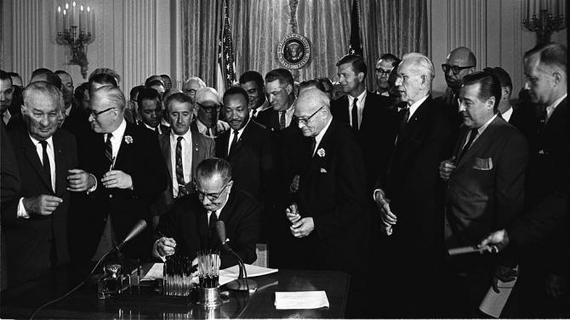 July marks the 50th anniversary of perhaps the most far-reaching emancipatory reform in American history -- passage of the Civil Rights Act of 1964. In the coming months, many in our nation will rightly honor the heroes of the civil rights movement whose courage and leadership helped secure passage of this seminal piece of legislation.

And as we honor the movement's activists and organizers, we must not forget to also recognize the handful of bold foundations that provided important financial support for the movement in the decade preceding this major victory.

Four in particular stood out as champions of civil rights at a time when most foundations did not get involved. They fought segregation, disenfranchisement and Jim Crow by making meaningful investments in civil rights advocacy, especially among grassroots organizations in the South. From 1955 to 1965 the Field Foundation, New World Foundation, Taconic Foundation and the Stern Fund supported activities that were at the center of the movement, including litigation, nonviolent organizing, training and leadership development.

Notably, these "freedom funders" collaboratively financed the Voter Education Project, which brought together the movement's leadership organizations to register hundreds of thousands of black voters in the South. They also invested heavily in the grassroots strategies and tactics that organizations such as the Student Nonviolent Coordinating Committee and the Congress of Racial Equality used to make the issue of civil rights impossible to ignore by the public and, eventually, lawmakers. Sit-ins, nonviolent protests and coordination among these groups were key to securing legislative change.

It is cruelly ironic that on the 50th anniversary of the Civil Rights Act -- in a year when Americans should be celebrating -- we witness renewed and massive attacks on civil and voting rights. More and more states are passing laws to restrict voting among communities of color by creating the equivalent of a modern-day poll tax, such as restrictive photo-ID requirements, elimination of early voting and Election Day registrations, and many other new barriers. This is of special concern in light of the Supreme Court's recent nullification of a fundamental provision of the Voting Rights Act.

Attempts to disenfranchise certain Americans are not limited to voting. States such as Arizona and Kansas are trying to codify discrimination that is based on sexual orientation. Numerous states are restricting access to safe reproductive health care for women, placing millions at risk. Some have attempted to pass laws that criminalize undocumented immigrants. Effectively, this is a full frontal assault on fundamental American values and basic civil and human rights.

We can't imagine that the Freedom Funders would look at this moment and decide to stay on the sidelines. And yet as our nation's philanthropic institutions continue to enjoy significant freedom regarding how and what they choose to fund, only a few are building on the legacy of their predecessors by supporting advocacy and grassroots organizing that supports the protection of basic human rights.

Especially when contrasted with the considerably larger coffers at the disposal of the conservative opposition, such progressive funding is minuscule and insufficient to reverse these regressive trends. With philanthropists such as the Koch brothers and the Scaife-affiliated Allegheny Foundation providing substantial funds to powerful think tanks like the Mercatus Institute, the American Legislative Exchange Council and other conservative organizations, progressive foundations must step up to meet possibly the biggest threat to democracy that many of us will see in our lifetimes.

Philanthropic institutions have an obligation to serve the public good. This is justified by the generous tax exemptions granted them and the near-total lack of oversight and regulation that allows them great freedom. Now is the time for foundations to show their mettle by fighting for justice and protecting our democracy. They can do this by prioritizing work that benefits underserved communities and funding grass-roots advocacy and organizing that help these communities have a powerful voice.

Today's philanthropists and institutional grantmakers have a serious decision to make: continue to be bystanders in the fight for civil rights or build on the legacy of the Freedom Funders. The choice we make can mean the difference between realizing Martin Luther King Jr.'s dream of an inclusive nation and bearing witness to our country regressing to the era of segregation and Jim Crow.

Benjamin Todd Jealous is a partner at Kapor Capital and senior fellow at the Center for American Progress. He is also a former president and CEO of the NAACP. Aaron Dorfman is executive director of the National Committee for Responsive Philanthropy. The term "Freedom Funders" is taken from a commissioned paper about philanthropy and the civil rights movement by NCRP.