I've been to perhaps too many art shows and art fairs and countless fundraisers this winter, but Mad About Art, Fountain Gallery's Annual Art Auction and Benefit held at Skylight West recently was a singular happening that turned me on and reminded me about the importance of both culture and giving back. 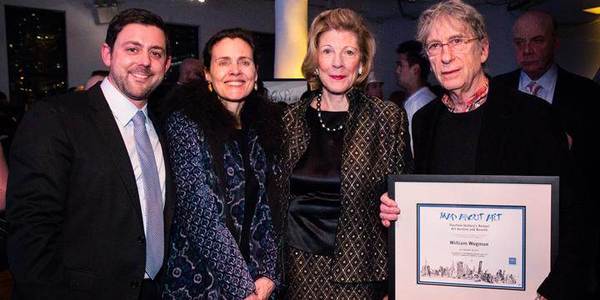 Fountain Gallery is the premier venue in New York City representing artists living with mental illness, and more than 30 of these artists, ranging in experience from highly trained to self-taught, were on hand to present their work to nearly 500 guests. A dazzling array of art was on display, from watercolor, oil and acrylic paintings to mixed media pieces, digital photography and more.

The evening was NYC-themed in décor, food - and art. The art, exhibited on two floors dubbed "Uptown" and "Downtown," included striking representations of city landmarks, streets and scenes, selected by curator Sasha Nicholas. Auction bidding was electronic, facilitated by a squad of "bidding valets" sporting illuminated hats and iPads, and auction participants tracked bids on large screens. Art sales topped those of any Fountain Gallery event since 2001, when this annual benefit was launched as Celebration of Life. 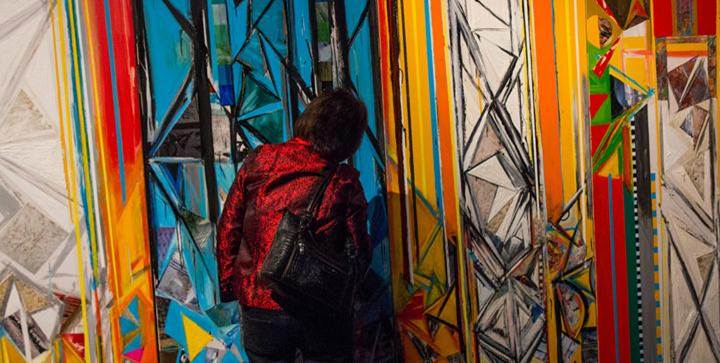 WABC-TV's talented Lucy Yang introduced William Wegman, the recipient of the Esther Montanez Award, established in memory of Fountain Gallery's founding director. William was recognized for his inclusive artwork and his support of artists living with mental illness.

William - who is probably best known for the endearing photographs of his Weimaraner dogs Man Ray, Fay Ray and Fay's progeny - has created work for Sesame Street on PBS and has appeared on Saturday Night Live. The author of numerous children's books (Penguin will publish his next in the fall), William has exhibited his photographs, videos, paintings and drawings in museums and galleries throughout Europe, Asia and the U.S. His incredible art is inclusive, full of humor, generous of spirit and broad in its appeal.

I chatted with Bill after his presentation and commented on how he accepted the Fountain Gallery honor humbly and with characteristic dry wit. I had not known he lives in Chelsea! He donated a piece to the auction, as did other top names such as Tony Bennett, Paul Davis, Bentley Meeker, Jason Rohlf, Harriet Sawyer, Ungano & Agriodimas, and The Walther Collection. 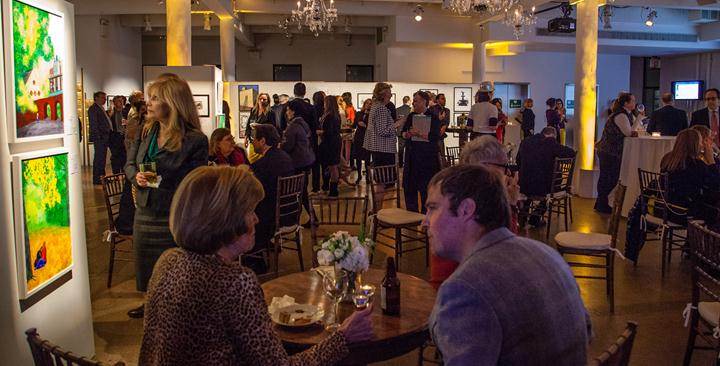 The atmosphere was electric and the sales volume high. Photo credit: Saskia Kahn.

Riffing on the word "Mad" (as used in the event's title), Fountain Gallery Director and friend Jason Bowman noted:

I'm frequently asked, 'Aren't all artists crazy?' I usually smile politely and answer, 'I can understand how you might think that.' The truth is that to be an artist means that one is expressive, maybe even eccentric, but no: Not all artists struggle with the severe effects of depression, bipolar disorder and schizophrenia. Fountain Gallery artists use art as a vehicle for channeling their creative visions and overcoming the challenges of serious and persistent mental illness. The Gallery is a place where we focus on strengths, appreciate creativity and beauty, and make money through a cooperative business. 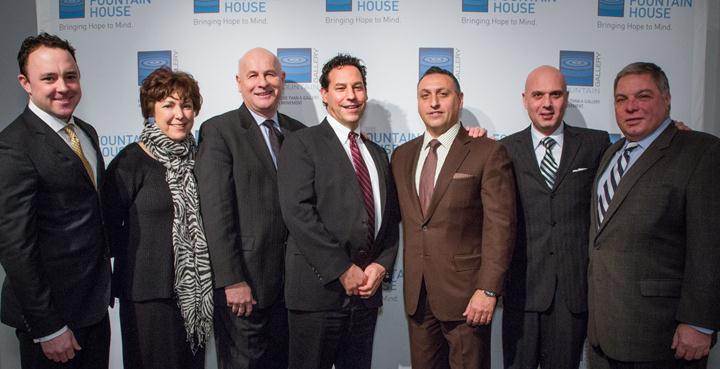 Fountain Gallery has attracted distinguished supporters. Among the winning auction bidders was the legendary Agnes Gund, President Emerita of the Museum of Modern Art (MoMA). My grandmother was an "Agnes," so I prefer to think of Agnes Gund as "Ms. Gund." At any rate, Ms. Gund has collected Fountain Gallery art and curated an exhibition there, and she has commended the Gallery as "a place where you can view fine works of art made by a group of excellent artists."

I've attended exhibitions at Fountain Gallery's elegant space at 702 Ninth Avenue at 48th Street. Recently I had an opportunity to get a behind-the-scenes look at what goes into their shows and other activities: As part of a collaboration between an organization I founded, the J. Luce Foundation, and Stonehenge Realty, Fountain Gallery presented an exhibition at the Stonehenge-Luce Pop-Up Non-Profit Annex on Manhattan's Upper East Side.

Gallery artists and volunteers skillfully installed a show of works on paper in this "pop-up" space while another Fountain Gallery show was on view at its Ninth Avenue home base. While these two exhibitions were up and running, Fountain Gallery artists also made a splash at the Outsider Art Fair. Another Fountain Gallery exhibit is being enjoyed by the public on an ongoing basis: A large-scale, three part sculpture, unveiled at the Kennedy Center in 2011, is now on view in the lobby of the Citi building in Long Island City. This dedicated group is perpetually juggling multiple projects with panache. 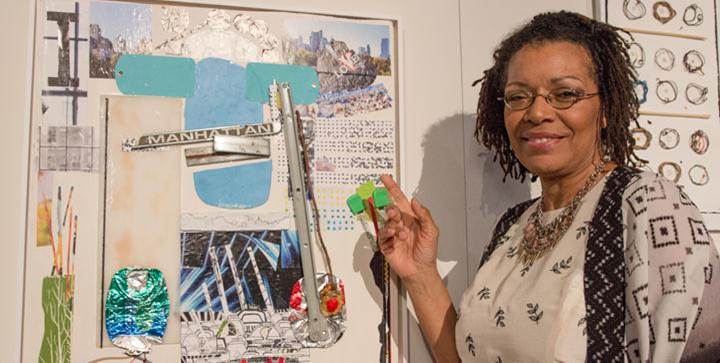 Fountain Gallery artist Azure Bourne with "I Love N.Y." During the program she shared her personal story with the assembled guests. Photo credit: Saskia Kahn.

Fountain Gallery was founded in 2000 by its parent organization, Fountain House, the world's leading recovery center for people living with mental illness. Members and staff collaborate to develop successful employment, education, wellness, and housing programs and perform all the functions necessary to keep the community going. By working together, Fountain House members and staff create a culture that transforms lives and simultaneously works to fight the stigma associated with mental illness. 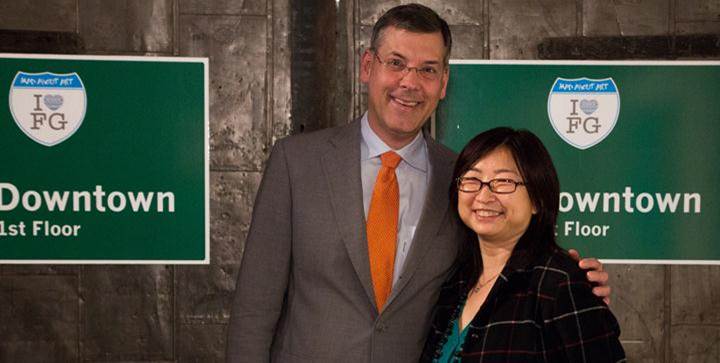 About "stigma": Striving not to discriminate against people with disabilities such as mental illness is important and worthy. But seeing the awe-inspiring art created by these gifted artists viscerally drives the point home: If people with mental illness can do this, what else might they be able to do? I am proud to support Fountain Gallery and Fountain House, and I applaud their groundbreaking and enlightened mission. I urge you to get involved.

The James Jay Dudley Luce Foundation (lucefoundation.org) is the umbrella organization under which Orphans International Worldwide (OIWW) is organized. If supporting young global leadership is important to you, subscribe to J. Luce Foundation updates here.