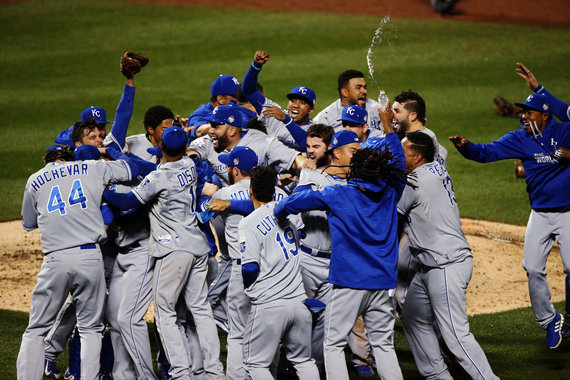 With the end of the World Series, I began thinking about all the lessons I've learned about business and leadership from baseball. Whether it was playing the game or watching it on TV, I realized that the game has shaped my actions and beliefs in my career and relationships.

As I recently told my team, "This is the first inning of a very long baseball game" which helps keep all of us focused on our long-term vision. Baseball managers just like business leaders are tasked with building winning teams. Here are four business lessons from baseball.

1. Never give up, perseverance is key
The hottest topic surrounding this year's World Series is without a doubt the fact that both teams haven't won since the 80s. Imagine missing your goal for more than 25 years and finally being so close to achieving it. Persevering in the face of adversity and never giving up is one of the most important attitudes to have in business and life. After 12 innings, the Kansas City Royals come from behind to beat the Mets, clinching their first World Series title since 1985.

Unfortunately, things don't always go the way you envision or plan. That's just a fact of business and having the strength to keep going even when you're down will often lead you to success.

2. Whether winning or losing, always remain optimistic
Many hold this year's matchup in a negative light, essentially calling it a championship among perennial losers. However, I like to see it as a championship between two teams who have demonstrated an insurmountable level of determination and persistence. Maintaining a positive approach like this has always been important to me and something I strive to keep.

Regardless of what unplanned event has happened or what setback I encounter, I like to stay optimistic. Negativity is infectious and brings down the whole team. An optimistic philosophy is incredibly important for leaders to adopt as it sets a positive tone for your team and instills determination.

3. Players win games, teams win championships
A whole team working well together will always trump great players working alone. There have been a lot of great baseball players that have won league awards yet failed to capture a World Series ring. Ken Griffey, Jr., was a 13-time All-Star and is ranked sixth among all-time home run hitters. Barry Bonds received seven NL MVP awards and 14 All-Star selections. Although they are considered some of the best players in baseball history, they have never won a World Series.

Just like in baseball, in business team chemistry is the result of strong relationships and a strong corporate culture that promote teamwork and mesh different strengths. After winning the World Series, Royals first baseman Eric Hosmer said it best: "Your team is not doing too well. Everyone relates back to that and how much it hurt."

And while it's great to have talented team members, it's always the whole organization working together toward a common vision that achieves success. Bottom line, "the difference between success and failure is a great team."

4. Communication is key
Effective communications is key. And, it starts from the top. Every member of the team must know how he or she factors in to the overall equation. In baseball, each player has a position and must cover a specific portion of the field. If that player fails to do so and leaves a gap, he or she risks letting the other team score.

Business is conducted in much the same way where each team member has particular role that helps the team accomplish its mission. As a leader, it's important to make sure team members clearly understand their responsibilities so that they can play their part in helping achieve the common goal.

Baseball is a really an inspiring game because it is one of the few that translates its lessons beyond the baseball field. In business and life, this game reflects great truths for personal endurance and business success. The World Series reminds us winning championships takes more than being the best team in the league.