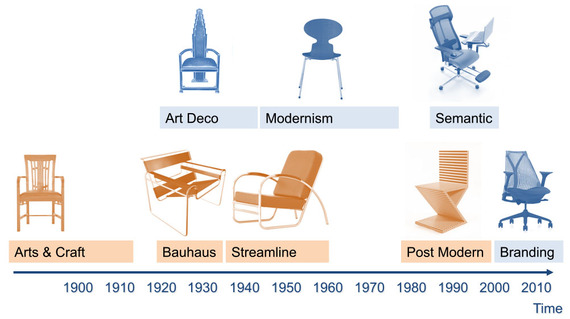 Even more than art, design shapes how we experience our surroundings and ourselves. Think about it: art, almost by definition, abstracts from the details of everyday life; design shapes them in the most immediate way. Designers curate ideas and condense them into sensory expressions; they make ideas tangible--bad ones as well as good ones! Design constrains our behaviors and molds our perceptions and has been doing so for one hundred years.

The industrial revolution transformed the world by ushering in a new era of mechanized mass production. Cheap, factory-made goods became affordable to the general public and a middle class emerged, defined above all by its purchasing power. But this unprecedented material affluence came with a price: mass-produced products lost their soul, every bit as much as the factory laborers who tended the machines that made them.

The English Arts & Craft Movement represented the first reaction against the debasement of the commodity in the industrial age. The "art workers" who formed themselves around the gigantic personality of William Morris (1834-96), perceived mass manufacturing as impersonal and a threat to human well-being--"For what is beauty," asked Morris, "but the expression of a man's joy in his labor?" The rough-hewn products of the Arts & Crafts movement celebrate the materials of which they are made and the hand of the craftsman who made them.

In the aftermath of the First World War it had become clear that there was no turning back to the romantic, pre-industrial idylls of the Arts & Crafts. Under the leadership of Walter Gropius, the Bauhaus (1918-33) embraced the machine and searched for an aesthetic consistent with the technologies of modern production. Desk lamps, teapots, and typography all came to express the rational, rhythmic, geometrical manufacturing processes that made them possible.

Machine Age America made its own contribution to the aesthetics of the everyday. Celebrity "industrial designers" such as Raymond Loewy, Henry Dreyfuss, and Norman Bel Geddes helped to lift America out of the Depression by rekindling the desire to consume: swoopy locomotives, streamlined office furniture, and skyscrapers whose tiered setbacks made them look like rocket ships firing themselves into the sky. Nothing was immune to the hand of the designer whose motto was, "Never leave well enough alone."

Inevitably, a reaction set in: Postmodernism went to war against the growing monotony of beige cubicles, Helvetica typefaces, and urban grids in favor of a palette of pastels, ambiguous forms, and a playful romp through the corridors of historical styles. In search of "Design Semantics," designers experimented with new forms of expressing the emerging consumer electronic products. Proponents of "Human-Centered Design" have argued that the search for style is misplaced, and that the forms of products must evolve out of respect for the needs of the people who will use them.

What is the next major movement in design? Crowd-sourced design? Mass customization? One-off products created by the citizen-designers of the Makers Movement? The increasing democratization of design and manufacturing suggests that it will not be long before each of us end up having our own personal movement!

Special thanks to Dr. Barry Katz for researching and co-writing this article

More:
CraftsArtDesignStylepost-modernism
Newsletter Sign Up
An essential daily guide to achieving the good life
Subscribe to our lifestyle email.
Successfully Subscribed!
Realness delivered to your inbox