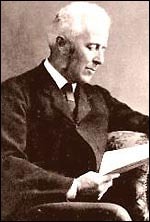 As an intern, young Conan considered himself privileged to be working under Dr. Joseph Bell. At the University of Edinburgh Medical School, the good doctor was a legend.

By the way a man walked and the tattoos he sported, Dr. Bell could determine if he were a sailor and which countries he had visited. By listening to accents and by examining calluses, a patient's place of origin and occupation could be deduced. He realized that finding a solution to a patient's problem meant understanding more than biology. He needed to understand, through observation and dialogue, the context of the illness and how it affected his patient.

A few years after receiving his medical education and tutelage from Dr. Bell, Conan was given the full title of Sir Arthur Conan Doyle for his written works describing the incredible abilities of the private detective Sherlock Holmes, a character for whose inspiration he credits Bell.

The mantra of North American medicine right now is Patient Centered Care. It means understanding that patients are not merely biological organisms to be tested and evaluated, but are themselves experts on the impact of their illnesses.

Better outcomes are tied to a more personalized approach, particularly one that considers the culture and language of the patient and his family.

Show me the money!

Better treatment outcomes are not the only impacts of using communication-savvy providers. There is money involved. Last year, thousands of hospital systems were penalized millions of dollars by the Centers for Medicare and Medicaid Services for low patient satisfaction scores and lack of language access through interpreters and translated documents.

Still more systems and individual doctors were sued for civil rights violations for not providing professional interpreters for patients who do not feel comfortable speaking English. Interestingly, any reparations demanded in lawsuits for violations of the Civil Rights Act of 1964 are not covered by malpractice insurance, an expensive realization to have after the fact.

Four key habits of a doctor-communicator

A competent provider who is also a master communicator, both receptively and expressively, is simply a better physician. A doctor-communicator:

1. Engages the patient. The key to eliciting information from patients and having them comply with treatment plans is the developing of a relationship of trust. Trust develops from rapport. Rapport builds from a sense that "this doctor is really trying to understand my situation." The most successful doctors model a concerned, caring relationship with a patient knowing that such a connection will naturally grow from their efforts. (Angelelli, 2004)

2. Asks a lot of open ended questions. Even when using diagnostic algorithms, a provider is in a much better position to find the true root of a problem and simultaneously build rapport with a patient by gathering as much information as possible before switching to directed questions. Directed questions and yes/no questions are typically used to investigate an assumption.

A doctor-communicator does not investigate assumptions until having enough contextual information about the illness, the person's beliefs about it, what he has already done to address it and what he fears about it.

3. Is attentive. The vast majority of limited English proficient patients belong to what are known as high-context cultures. Briefly, this means that WHAT is said is only as important as HOW it is said and HOW it connects to what is already known by those in the conversation. Body language, facial expressions, and tone of voice dramatically impact what is understood and communicated by high-context oriented patients.

A physician's very specific questions such as what medication are you on, may be met with what may seem a never-ending answer. Why? High-context oriented patients want the provider to have CONTEXT, information that they feel is necessary for the doctor to have in order to find a personalized solution for them. If you allow your patients to talk more initially they will be less likely to continually try to insert contextual information again and again during subsequent questions. (Foley, 2014)

This can be a challenge for time-crunched doctors who tend to "interrupt patients within eighteen seconds of when they begin telling their story," according to Jerome Groopman in his bestselling book, How Doctors Think. Fighting this tendency has multiple positive outcomes, including the physician being told something vital for a correct diagnosis he might otherwise miss.

4. Uses professional interpreters. Taking Spanish in college doesn't qualify a person to dialogue with patients about their health any more than learning the rules of the road would qualify a formula one driver. Professional interpreters are bound by laws covering confidentiality and a code of ethics that additionally guarantees transparency and accuracy.

When using an interpreter, doctor-communicators speak directly to and maintain engagement with their patient. The interpreter takes care of the language barrier, but also provides insights on cultural considerations when needed.

One observation on the effectiveness of a series of workshops given to physicians in Geneva, Switzerland on the use of interpreters noted that there was an increase in patient-centeredness and cultural awareness. (Bischoff A, 2003)

Physicians who step outside the biological perspective, being communicative and observant and building relationships of trust with their patients, just have better outcomes. They are doctor-communicators who efficiently connect with their patients no matter language, creed, or culture in a manner that would impress even the legendary Doctor Joseph Bell.