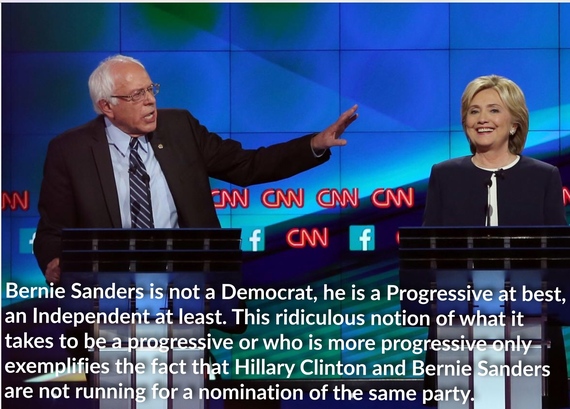 2016 is seeing the complete breakdown of the political party system in the United States; mainly the two-party system. And as the parties implode, we are the ones left in the debris and rubble the politicians are leaving in their wake.

Bernie Sanders is not a Democrat, he is a Progressive at best, an Independent at least. This ridiculous notion of what it takes to be a progressive or who is more progressive only exemplifies the fact that Hillary Clinton and Bernie Sanders are not running for a nomination of the same party; they are running against each other for President.

Bernie is interested in winning, not in the Democratic Party winning, it's health, or survival for that matter. On the contrary, he talks of being anti-establishment, which by definition would mean against the established Democratic Party. Why he isn't on a ticket on his own, on the Independent side, or a new Progressive Party side is beyond me. He is not a Democrat and has no interest in the Democrats taking the White House. More importantly, many of Sander's "exciting and new" followers are not interested in being Democrats, they're interested in Bernie Sanders winning the White House. What happens after that, they have no idea, but he must win. Him, not the Democratic nominee, but him.

Hillary Clinton is a Democrat through and through. She waivers from Republican light to Blue Dog however she has never been a "progressive" meaning a basic socialist. Which is not a dirty word to me and shouldn't be to anyone; but again, she is many things but not that. She's no Ted Kennedy, the last real "progressive" of the Democratic Party.

So Bernie and Hillary are actually not vying for the same nomination, or shouldn't be. Marty O'Malley and Hillary, sure, but Sanders should be an Independent or Progressive.

But he wants to win, so what did he decide? To JOIN the establishment, to continue on in a party that he does not believe in, a platform that he does not support and an opponent that he will be as quick to attack and turn sour on as her Republican rivals.

But the Democratic Party allows it for the same reason Republicans are allowing their party to be taken over by the Tea Party or tea-party sympathizers (Ted Cruz, Marco Rubio) and another Independent, Donald Trump. In fact, Sanders and Trump should probably be debating each other for the Independent Party's nomination, Hillary, O'Malley and others for the Democratic and Kasich, Jeb Bush and Chris Christie for the Republican's.

But instead of that three-way split of the votes, and the profits from the debates, a Progressive Party or Independent, Bernie Sanders, is competing for the nomination of a party he doesn't support with that party's clear frontrunner and best candidate for the party. Many of his followers are making it clear they will not support Clinton if she takes the nomination and that sets the stage for a President Trump, Cruz or Kasich.

How chilling. That a man who's open xenophobia and hatred for Muslims, for Mexicans, for women, contempt for the poor, a man with no concept of the Constitution or foreign affairs, would be the Republican Party's front runner. But he isn't because he isn't really a Republican, but no one will say it or do anything about it. And he's running for a nomination against two men who are so tea party adjacent that they should be in that party.

And the parties crumble, the nominees fight about each other and we, the people, get lost in the entire process. Embarrassing and harmful rhetoric rises and is accepted as campaign fodder, hatred flourishes. Feb. 10 our President presented a budget, as a President Sanders would, and the Congress completely ignored it, didn't look at it, refused, as they more than likely would to a Sander's budget. The level of disrespect for a seated president at this level has simply not been seen before. It is the first time ever that Congress has not had the budget presented.

I have maintained that the regression and hatred the leading Republicans are espousing is horrific and obscene, yes obscene. The FCC says something is obscene when it is a direct affront to the decency standards of the community; well, Trump, Cruz, Rubio, they are a direct affront to we, the people who are not filled with hatred.

Hatred. Trump taps in to the angry white conservative that feels powerless because the Republican Party has been coopted by the Tea Party or is just plain racist and Sanders taps in to the angry Democrats who feel that we have been mired by compromise and that the people's voice, their needs, haven't been met while the one percent get richer. Where's our piece of the American good life? Well I'll tell you where it isn't; it isn't under Present (Insert Republican Candidate, Any, here).

So candidates from four parties, Progressive, Democratic, Republican and Tea Party are competing for two nominations in two parties that have had their base eroded, their platforms distorted and their effectiveness thwarted. (Snap).

And we could be left in a horrific mess with a zealot in office, zealots in the Congress and a Supreme Court made up of horrific conservatives for the next 40 years given the next President will likely get four members on the bench.

I was for both candidates, Sanders or Clinton. Sanders lost me in Iowa when he joined Republicans in unfair attacks on Clinton and when I figured out he simply could not get medicare for all, free college and the destruction of the Wall St. infrastructure of greed. He won't break up the banks, destroy Wells Fargo, Bank America or Citibank's ability to destroy lives, won't end all the mortgage wrong doing being done again (after watching "The Big Short" know it's happening again)....he'll fight his Congress, the public will loose interest and he'll lose his shine and we'll be back fighting over everything again.

Will Clinton be able to do more? Her record says yes, but that remains to be seen.

But what is for sure, is having four parties competing for two spots makes us the losers, the debates absurd and the country broken in to more pieces now than ever.

To hear this or other interviews get the FREE Karel Cast App, subscribe in Spreaker to the Podcast or simply go to the most incredible website on all the planet, save this one, ReallyKarel