A new type of particle may have shown up independently at two particle accelerators, physicists say. The particle, made of four quarks (the ingredients of protons and neutrons), appears to represent a state of matter previously unknown.

Signs of the particle were sighted at the Belle experiment in Japan and the Beijing Spectrometer Experiment (BESIII) in China. Scientists can't be sure what the particle is made of, or if it's even a single particle at all — there's a chance it could be two particles, each made of a pair of quarks, bound together. But nothing like it has been seen before, and the discovery offers the hope of clarifying the strange nature of quarks.

"It helps us understand how matter's put together, and it helps us understand this underlying theory of quark interactions," said Leo Piilonen, a physicist at Virginia Tech and a spokesperson for the Belle collaboration. [Beyond Higgs: 5 Elusive Particles That Await Discovery]

Both Belle and BESIII collide electrons with their antimatter counterparts, positrons, to create powerful explosions that transform the speedy particles' kinetic energy into new forms of matter. Among the various products born in the collisions are exotic particles called Y(4260), first discovered in 2005. 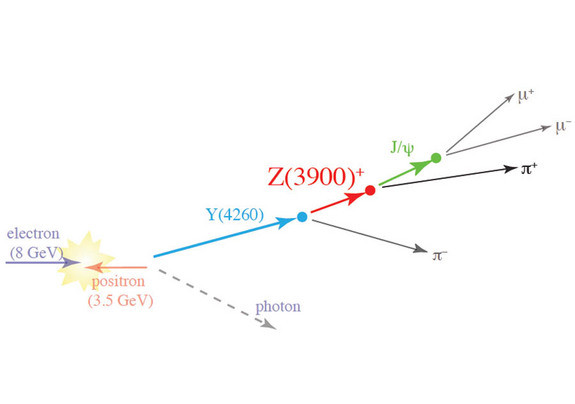 This decay diagram shows how the new four-quark particle Z(3900) was formed from the decay of a Y(4260) particle created by the collision of a positron and an electron.

"This is a very interesting particle — it was discovered, but it's never been predicted," said Fred Harris, a physicist at the University of Hawai'i at M?noa and a co-spokesperson for BESIII. "It's a black sheep in high-energy physics."

In studying the decays of Y(4260) particles, the researchers noticed the particles would sometimes disintegrate into an even more mysterious bound state that appears to be made of a charm quark, an anti-charm quark, and two other quarks — perhaps an up quark and an anti-down quark.

Quarks come in six flavors — up, down, strange, charm, bottom and top — and each of these flavors has an antimatter counterpart. The protons inside of atoms are made of two up quarks and a down quark, whereas neutrons are made of two downs and an up quark. No particle made of four quarks has ever been proven to exist.

Scientists are still figuring out the ways different flavor combinations of quarks can fit together to form particles. These interactions are described by a theory called quantum chromodynamics (QCD), which is still poorly understood. [The 9 Biggest Unsolved Mysteries in Physics]

"QCD was a great evolution in our understanding of matter — in fact it got a Nobel Prize — but people still can't do any calculations with it because it's so complicated," Piilonen told LiveScience. "[This discovery] is helping us to understand QCD better."

The new particle has been dubbed Z_c(3900). The physicists can't be sure what Z_c(3900) is made of, but they are fairly sure it exists. The Belle experiment found 160 of the particles, and BESIII found 300. Both discoveries are statistically significant, and are extremely unlikely to turn out to be a fluke. The findings were described in two papers published June 17 in the journal Physical Review Letters. 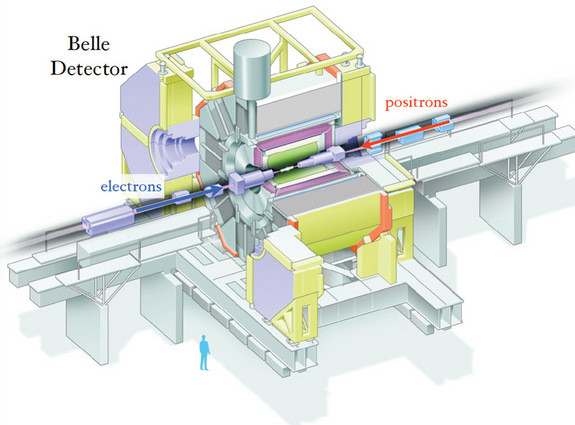 "Bound states like this have never been observed before, so many in the particle physics community have been left scratching their heads," physicist Eric Swanson of the University of Pittsburgh, who was not involved in either project, wrote in an essay about the discoveries published in the same journal issue.

"If the four-quark explanation is confirmed, our particle physics zoo will need to be enlarged to include new species," Swanson added. "And our understanding of quark taxonomy will have expanded into a new realm."

BESIII is the latest iteration of a project that began at the Beijing Electron Positron Collider in the 1990s. Only recently has the experiment been targeting the byproducts of Y(4260) particles, and its initial findings on the Z_c(3900) are based on just two months of data collection, Harris said. With more time, the physicists expect to gain a clearer picture of what the particle is made of and what other strange combinations of quarks might be possible.

"We're quite excited," Harris said. "We started doing the X-Y-Z physics recently, and I think we're going to be very successful," he added, referring to the mysterious family of quark-containing particles with names beginning with the letters X, Y and Z.

The first version of Belle, located at the KEKB particle accelerator in Tsukuba, Japan, shut down in 2010, and the new discovery is based on data acquired before then. The project's successor, Belle 2, is currently under construction and expected to start up in 2015. The experiment was chiefly designed to study the differences between matter and antimatter.

"When we first built Belle we never in our wildest dreams anticipated we'd find something like this," Piilonen said. "We were not looking for these particular states, but all these fascinating discoveries came about serendipitously."

1 / 15
Beetle Head
A frontal view of a myrmecophilous ground beetle with the antennae removed.