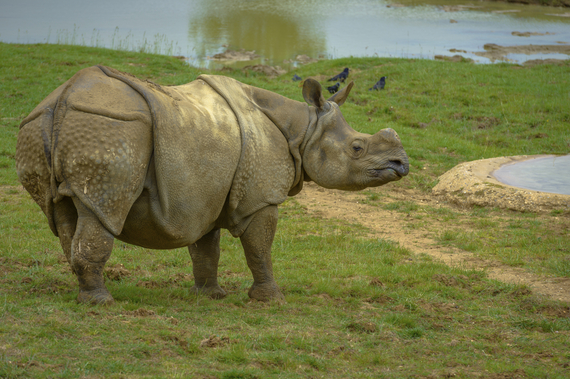 As opposition to the Trans-Pacific Partnership (TPP) mounts in the halls of Congress and court of public opinion, the Obama administration is searching for new arguments, however tenuous, to sell the controversial deal. One of the latest TPP sales pitches from the Office of the U.S. Trade Representative (USTR) and other TPP proponents is that the deal would help protect endangered wildlife like rhinos and elephants.

Such promises about the supposed environmental benefits of trade pacts are not new. Time and again, we have been told that unpopular trade deals would reduce environmental degradation in trade partner countries. And time and again, as explained below, these promises have proven empty.

Luckily, we have other policy tools that can and should be used immediately to help save endangered species from extinction. Here are four reasons that we should use those tools rather than relying on the TPP:

1. TPP-like deals have repeatedly failed to live up to promises of environmental protection.

Twenty-two years ago President Bill Clinton proclaimed the environmental side agreement of the North American Free Trade Agreement (NAFTA) as a "force for social progress," claiming it would lead to "better preservation of the environment." Instead, NAFTA facilitated the expansion of fossil-fuel-heavy agribusiness in the United States, incentivized a boom in environmentally destructive mining in Mexico, undermined the ability to regulate carbon-intensive tar sands in Canada, and empowered multinational firms to demand taxpayer compensation for environmental protections in all three countries.

The legacy of using empty environmental promises to sell trade deals didn't stop with NAFTA. In 2007 USTR promised the U.S. - Peru trade deal would "promote legal trade in timber products." The promise was based on the deal's detailed set of rules on forests that, unlike NAFTA's unenforceable environmental side agreement, were legally binding. Indeed, the pact required Peru "to combat trade associated with illegal logging" and specified a litany of reforms that Peru had to take to fulfill this requirement.

But after more than six years of the U.S. - Peru trade deal, widespread illegal logging remains unchecked in Peru's Amazon rain forest. A 2014 study in Scientific Reports found that about 70 percent of Peru's supervised logging concessions are being used for illegal logging. The World Bank, meanwhile, estimates that eight out of ten logs exported by Peru have been cut illegally.

For years, U.S. environmental groups have called on USTR to use the rules in the trade deal to counter Peru's extensive illegal logging. In 2012, the Environmental Investigation Agency (EIA) and the Center for International Environmental Law (CIEL) formally petitioned USTR to take action under the deal to verify the legality of timber shipments from two Peruvian companies that were notorious for exporting illegally-cut logs to the United States. EIA's head of Peru programs stated at the time, "It is the responsibility of the US Government to make sure that the US is not an accomplice in illegal logging activities."

But USTR took no such action. To date, Peru has faced no formal challenges, much less penalties, under the trade pact, despite ample evidence that Peru has violated the pact's rules by illegally cutting Amazonian trees and exporting them to unwitting U.S. consumers. In June 2015, EIA concluded, "Not only has no one been held accountable for past violations, but the U.S. is turning a blind eye to ongoing trade in timber that should be considered at high risk of illegality."

The consistent track record of non-enforcement of environmental provisions of trade pacts hardly inspires trust in the all-too-familiar assertion that the latest trade deal - the TPP - would help protect wildlife. This promise is particularly doubtful given that...

2. The TPP's environmental terms are expected to be weaker than the unenforced provisions of the Peru trade deal.

A recent statement by U.S. Trade Representative Michael Froman indicates that the TPP, like the U.S. - Peru trade deal, would commit signatory governments to "combat" illegal trade in endangered animals. The Sierra Club and many other U.S. environmental groups repeatedly called for stronger language to "prohibit" the trade, transshipment or sale of products taken or traded in violation of national laws or applicable foreign laws that protect wildlife. However, the final text is expected to stick with the weaker provision.

Worse still, in a step backwards from the Peru trade deal, the TPP is not expected to spell out specific legal reforms and enforcement measures that TPP countries like Vietnam and Malaysia must undertake to "combat" illegal wildlife trade. This omission could open a large loophole for illegal trade in products like elephant tusks and rhino horns to continue. This is particularly concerning given that surging demand for rhino horns in Vietnam is helping to drive a spike in rhino poaching in South Africa.

Even with the U.S. - Peru pact's stronger provisions against illegal logging, repeated efforts to push the U.S. government to use the trade deal to halt Peru's widespread illegal timber trade have fallen on deaf ears. If the Peru deal's stronger environmental enforcement terms have failed to halt illegal trade in timber in Peru, why should we expect the TPP's weaker provisions to be more successful in halting illegal trade in rhino horns in Vietnam?

3. The TPP could exacerbate threats to endangered species by incentivizing wider destruction of their habitats.

Beyond failing to protect endangered wildlife like elephants and rhinos, the TPP could actually contribute to the loss of their habitats, in part by expanding demand for destructive cash crops like oil palm (used to produce edible palm oil, cosmetics, detergents and other products). Studies have documented how oil palm plantations in TPP member Malaysia - the world's second largest palm oil producer - have contributed to the disappearance of habitats for endangered species.

The TPP is likely to encourage greater oil palm expansion in TPP countries like Malaysia by increasing demand for exports of palm oil. The TPP is widely expected to significantly reduce or eliminate most agricultural tariffs - that ostensibly includes the palm oil tariffs currently imposed by major palm oil importing TPP countries like Vietnam and Japan. If those tariffs would drop, palm oil exports - and thus, oil palm production - would be expected to rise in TPP countries like Malaysia. Expanding oil palm plantations would spell shrinking habitats for endangered animals, heightening the risk that they could face the same fate as Malaysia's extinct rhinos.

In addition, the TPP would expand NAFTA rules that empower multinational corporations to go before private trade tribunals to challenge government policies that protect endangered species. This threat is not hypothetical - just a few months ago, a NAFTA tribunal ruled that Canada's rejection of a controversial open-pit mining project violated NAFTA's foreign investor protections despite the fact that a Canadian environmental review panel found that the project could have threatened the endangered North Atlantic Right Whale.

4. We have alternative tools to reduce illegal wildlife trade - ones that have proven more effective and less risky than trade deals.

To protect endangered species like elephants and rhinos, we do not need to rely on another unenforceable trade deal that may, in fact, pose threats to their habitats. Other more effective tools exist to reduce illegal wildlife trade - ones that are free of the TPP's threats to the environment.

For example, all TPP member nations are among the 181 signatories to the Convention on International Trade in Endangered Species of Wild Fauna and Flora (CITES), which places restrictions on trade in products from endangered species, including rhinos and elephants. While enforcement of CITES has been a challenge in some countries, the U.S. government has successfully used CITES in concert with a U.S. law called the Pelly Amendment to compel Taiwan to meaningfully reduce illegal trade in rhino horns. The Pelly Amendment authorizes the U.S. president to indefinitely ban the importation of "any products" from a country if U.S. agencies find the government to be in violation of CITES by allowing prohibited wildlife trade. EIA, the Animal Welfare Institute and the International Fund for Animal Welfare have formally petitioned the U.S. government to use the Pelly Amendment to push Vietnam to curtail its illegal rhino trade.

And the Obama administration already has committed to using dozens of policy tools beyond the TPP as part of a recently-unveiled National Strategy for Combating Wildlife Trafficking, which seeks to achieve such goals as "a near‐total U.S. ban on elephant ivory and rhino horn trade." These tools include strengthening existing U.S. laws such as the Endangered Species Act, increasing the number of U.S. agents stationed abroad to investigate illegal wildlife trade, and working more closely with the International Criminal Police Organization (INTERPOL) to dismantle illegal wildlife trade networks.

Additionally, the United States can fully enforce the Lacey Act, a law that prohibits imports, sales and purchases of illegally-sourced plants and wildlife. This landmark law has been used for decades to crack down on trade in illegal wildlife products.

Such tools hold greater potential than the TPP to reduce illegal wildlife trade, while avoiding the TPP's threats to critical habitats and environmental protections. We cannot afford another unenforceable trade deal that not only fails to reduce the threats endangered species face, but risks exacerbating them. To protect endangered animals, we need tools that actually work, which includes more effectively using the ones we already have.

This post originally ran on the Sierra Club's blog, Lay of the Land.