I first traveled to Afghanistan as a soldier with the 101st Airborne Division in 2008. It was a rough deployment, but I didn't want to leave my experiences behind. So I spent two years studying Afghan history in graduate school and then worked in Kabul for a year and a half as a civilian. It has been fascinating, but also very difficult. The constant drumbeat of bad news and violence from the region wears on you over six years. To maintain my sanity and keep a fresh perspective, I have learned to focus on the positive stories and experiences that most people never get to hear about. Afghanistan is a strange, quirky, and often beautiful place, but too few of us get to learn about that side of the country. So here are a few of my favorite features of life in Afghanistan that are not commonly known by Americans. I hope some of this inspires you to consider the story of life there beyond the war:

1. Carpets: The best Afghan carpets are among the finest carpets in the world, especially the older pieces. There are dozens of distinct carpet weaving traditions in Afghanistan, but what distinguishes the very best Afghan carpets is the quality of the materials. The designs and weaving will always appear rustic compared to a fine Iranian piece, but once you know what to look for, the brilliant luster of good Afghan wool will make a more intricate and expensive piece from elsewhere look flat and lifeless. If you are bored by the flowery designs most often imported to the US, the geometric patterns and rustic aesthetic of Afghan carpets will probably appeal to you. And the best part? Great Afghan carpets are far cheaper than similarly high quality material from Iran, Turkey, or the Caucasus. 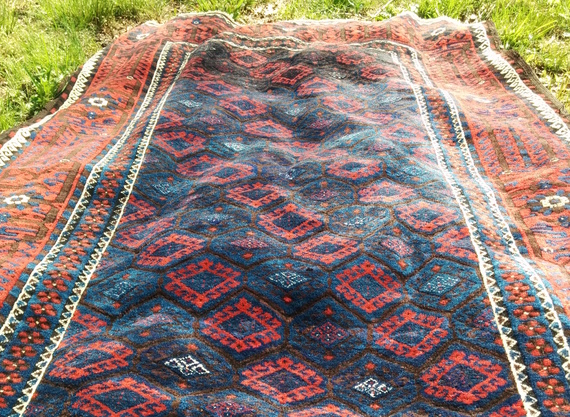 2. Fat-Tailed Sheep: I first encountered Afghan fat-tailed sheep while walking with my platoon in the mountains of Paktya in 2008. The sheep are objectively goofy looking, and they jiggle and bounce in unexpected and hilarious ways as they run up and down the mountainsides. Of course, there are many unsavory nicknames that Amurrkan soldiers have given these sheep and their overabundant rumps since 2001, but one thing must be said in their favor; they are delicious! The tail is mostly fat and is used with kabobs to add flavor to the meat and provide a different texture to vary the palate. The best way to have these kabobs is either on skewers, or in a technique called shepherd style. When cooked shepherd style, the tail meat acquires a brown, bacon-y crust that will make you look on skinny-tailed American sheep in shame. Imagine a ball of bacon filled with rich buttery goodness, then imagine having access to it every day for just a few dollars. Heaven...

3. The Attan Dance: Sexual politics in Afghanistan are complicated, so men and women almost never dance together. However, that doesn't mean that no one dances. The Attan is the Afghan national dance, and many men (I know less about Afghan women for obvious reasons), take enormous pride in their dancing technique. The basic step is not difficult, but the music gets faster and more complex as the song goes on. It starts with a group of men dancing in a long arc to the beat of a drum, and ends in a spinning, leaping, paroxysm of fury. Men drop out as other dancers surpass their skill level. Watching the last dancer is something like sitting in on an Afghan version of Stravinsky's "The Rite of Spring," and honestly it's a great show.

4. The Importance of Family: Living in Afghanistan for two and a half years has taught me more about the importance of family than I would have ever imagined. Back home in Georgia, family is certainly central to community life, but a lot of the ways in which that manifests itself are invisible to me because I'm not married and most of my friends are still single. In Kabul though, everyone I ever met wanted to know about my family. They were genuinely interested in my mother, and they all reacted with sadness when I explained that my father had died several years ago. They wanted to understand why I wasn't married, and why having children wasn't yet a priority for me. They weren't pushy, just curious. Over time, these conversations began to rattle around in my head, and I started to gradually ask more about the family life of people I met. More recently, I began to inquire after the health of the parents and siblings, spouses and children of people I had known for many years in the U.S. I also started to think about what place family actually holds in my own hierarchy of values and priorities. This was instructive and transformational for me, and I returned to the United States more conscious of the importance of the people in my life that I had often taken most for granted.