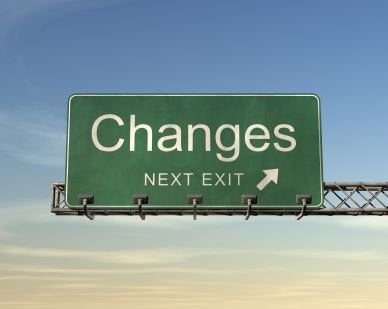 In a series of posts from a few years ago, I described the obstacles to and steps needed to produce positive and long-lasting change. This concern continues to be at the forefront of the public's minds because the world is in a constant state of flux. These changes are driven by ever-evolving advancements in technology as well as the usual challenges of life. The bottom line is that unless people continue to grow, stagnation is inevitable.

In general, people don't like change. During primitive times, change was perceived as a threat to survival which triggered our 'fight or flight' response. Though fighting or fleeing increased the chances of survival for cavepeople, neither are very effective for people in the 21st century.

Unfortunately, though we like to think that we have evolved far beyond our ancestors, the reality is that we are still quite primitive in some basic ways including our response to change. In fact, that same reaction still occurs in us when presented with a perceived (non-physical) threat to our lives. So, our instinctive reaction to change is to fight or run away, neither of which usually bodes well for the success of that change or the mental and physical health of those involved in that change.

I've returned to this topic because the three meta-stages of change that I describe in that series of posts, and the potential threat reactions that can occur in response, can be made easier if you can understand and prepare for the individual disruption that is likely to occur.

The more you can identify, understand, anticipate, and prepare for the coming wave of change, the better you will be able to buy into, adapt, and benefit from the changes that lie ahead. In other words, the less likely you are to fight or flee from the changes.

As a consequence, before you implement a program of change, significant effort must be directed at removing the threat from the desired change. The apparent dangers of the change can be mitigated with a few proactive strategies.

To best prepare for change, I want to describe four "from-to" shifts that you will need to embrace to gain the most value from the changes you want.

From Something Different to Status Quo

Create a long runway between when you decide to make the changes and taking action on those changes. As I just described, change is discomforting, but, with time, it can becomes more comfortable. So, leave plenty of time for you to wrap your comfort zone around the changes.

From Threat to Challenge

Actively shape your perceptions about the changes. If you allow yourself to instinctively decide whether changes are good or bad, the changes are likely doomed to fail. Because your first reaction will be one of threat, your initial perceptions will be negative. Once a negative attitude begins to develop around change, it will entrench itself and will be difficult to uproot.

You have to get out ahead of the this defensive reaction and frame the changes in the most positive ways with a particular focus on how it will benefit you and your life. This 'positive management' of the change will lessen the threat associated with the changes, thus reducing or eliminating the threat response. Instead, with a focus on the upsides of the changes, you will be more receptive to them.

From Unknown to Known

Educate yourself about all aspects of the changes. That which is unknown and unfamiliar is naturally uncomfortable and threatening. The result will be more fight or flight. But, the more you can learn about the changes, the less catastrophizing and hysteria will take place. In fact, with good information, the changes can morph from a threat to avoid into an opportunity and a challenge to pursue.

Empower yourself around the changes. A lack of predictability and control is one of the most powerful sources of threat and stress to people. When you actively engage in the change process, from vision to strategy to implementation, you give yourself the power to predict what lies ahead for you and you give yourself a sense of control over how those changes will impact you. And, in doing so, you instill in yourself a sense of ownership of the changes, thereby ensuring that you buy into every step of the way.

In sum, few people like change, but change is inevitable and healthy. Your best chance of fully implementing the changes you want in your life is to give yourself time to assimilate the idea of change, proactively shape your perceptions of the changes, educate yourself about the changes, and, finally, empower yourself around the changes. If you approach change in this way, you increase the likelihood that the changes will benefit you in your life.

Change Transformation Self Help Growth Human Potential
This Blogger's Books and Other Items from...

Positive Pushing: How to Raise a Successful and Happy Child
by James Taylor